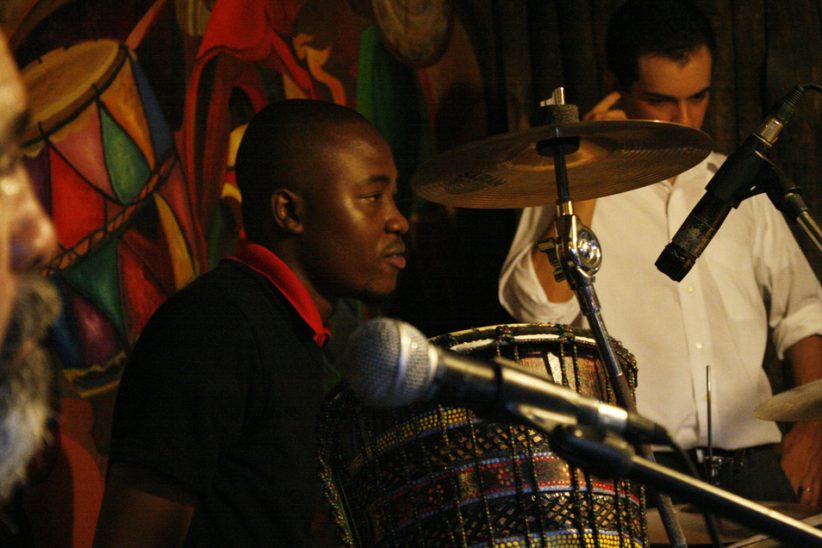 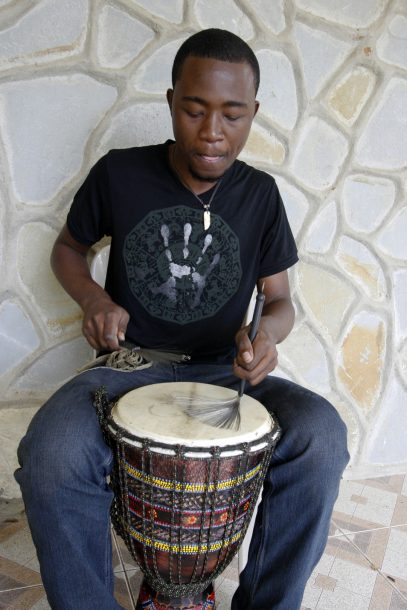 Caribbean jazz drummer Johnbern Thomas remembers the dates that changed his career much like any other musician. He remembers the Sunday in 1999 when, at the age of eight, the pastor of his church pulled him aside to say “God has a project for you,” asking him to play in what would be his first ever public performance. He remembers January 28th, 2010-the day he left the only home he’d ever known to try and earn a living in a country where he didn’t even speak the language.

And he remembers how, two weeks earlier, on January 12, he was concentrating so hard practicing riffs from a West African Roots book by Royal Hartigan that he didn’t notice the 7.2-magnitude earthquake that would postpone his dreams of becoming a jazz star in Haiti. “Someone took me by the hand and pulled me out of the house. I don’t even ask why that was, and then I felt and saw that it was an earthquake. Someone was crying ‘oh my baby, my baby.”

Thomas ran across town to search for his family, passing his uncle, covered in dust along the way. For days afterward Thomas slept on the streets as the search for the living, and later, the dead, continued. “The earthquake hurt everything. It hurt me, it hurt jazz,” Thomas says. “The earthquake will stay in the minds of all the jazzmen of Haiti.”

A native of the small town of Mondruis on the North Coast of Haiti, Thomas’s father was a priest, embassy worker and longtime drummer who played in different church and Christian-rock bands. Thomas’s mom was generally occupied with the burdensome task of caring for Thomas’ nine-sibling family. Shortly after his parents divorced, Thomas moved to Port-Au-Prince in 2001 to attend an American English high school and became a second drummer in his dad’s Christian-rock band.

“The first time I was playing in front of 3,000 street people in (park) Place Boyer, people were really happy because I was really small, and because of my dad’s name,” Thomas says. He smiles as he recalls rehearsing with one of Haiti’s greatest drummers , Joel Widmaier-the founder of the jazz festival that was canceled because of the earthquake. A couple years later, Thomas was beginning to make a steady living through regular gigs. He met Mark-Richard Mirand, a jazzman who paid him $100 a gig to play in one of Port-Au-Prince’s nicest hotels. It was around that time that his dad lost his job at the French Embassy, so Thomas’s gigs became his family’s only source of income.

Thomas will never forget the hot night in January 2009-almost one year exactly before the earthquake-when he played in a jam session at the historic Hotel Oloffson. The second night of Haiti’s 2009 International Jazz Festival had just ended when an American staying at the hotel asked if he could join the musicians there. Thomas recognized his name from his friend’s music book: the New York pianist Aaron Goldberg. “It was the first time I had seen a pianist playing like that,” Thomas recalled. Thomas said Goldberg invited him to jam the next day, saying, ‘wow this young drummer, he’s a good drummer, he can learn more.’

When Goldberg asked Thomas where he practiced, Thomas replied, “My bed and my pillow.” Two months later, a brand new Yamaha drum set arrived for Thomas from New York. “He was obviously studious and ambitious and hungry to learn and I was happy to help him any way I could,” Goldberg says of Thomas. “I gave him some tips on what to practice and what to listen to. Already he was conversant not only with jazz but also with both Haitian music and Caribbean music more broadly.”

Unfortunately for Thomas, a major setback was looming that would take him far away from his Haitian music scene and the only drum set he has ever owned. After playing a major Michael Jackson tribute concert in December 2009, Thomas joined a band lead by his music instructor and famous Haitian Jazz thinker Claude Carre to begin practicing to perform in Haiti’s 2010 International Jazz Festival, scheduled for January 23rd. “We played real soft jazz, American jazz, but we mixed it with Haitian caravan, a rara. In the B part, we swing it,” says Thomas of the music they rehearsed for the festival. “We play nago, a lot of international standards, we translate and play our styles. We had our own compositions, we played ballad, swing jazz, Latin jazz.” The week-long festival would have included shows in venues throughout Port-Au-Prince including the French institute and a large public concert in Haiti’s famous Champs de Mars park across from the National Palace. Thomas hoped the international venue would launch him into a new level of his musical career.

The earthquake put a swift end to the jazz show, and to Thomas’s immediate dreams of becoming a big musician in Haiti. Just as the homes, livelihoods and lives of over 220,000 were casualties of the earthquake, so was the fine arts scene that existed in the relatively well-off neighborhood of Port Au Prince. The National Palace collapsed and Champs de Mars park filled with the tents and tarps of the displaced. Cafes that once hosted Kompas, hip-hop, rock, Vudu-roots and jazz closed.

When a woman dragged Thomas from drum set on the day that would change his life, he emerged from his house to see people with broken arms, feet, eyes. His best friend and fellow drummer Peterson Louis died in the earthquake while visiting a friend’s house. “I passed like two weeks crying. Peterson was not only a musical friend, for me we were like brothers,” Thomas says. “Once when I didn’t have any gigs to play he called me and said, ‘Johnbern, I want to play. Do you have money?’ And he came to my house to bring me some money to eat and play, and just share the love of jazz music.”

None of Thomas’s family members were seriously hurt. But as the only member of his family who earned an income, and with no chance at paid gigs in post-quake Haiti, Thomas couldn’t sit around and wait for fine arts in Port-Au-Prince to recover. He had heard of other musicians and students crossing into neighboring Dominican Republic to study and seek a better means to support their families. When the Dominican Embassy re-opened two weeks after the earthquake, Thomas asked a friend who worked there help secure him a visa to Santo Domingo. Thomas arrived knowing only a couple family friends, but soon ran into a Dominican singer named Angie Joseph who offered to help him and some Haitian friends put on a benefit concert to raise money for their families back in Haiti. On February 19, about 60 people attended the concert in Santo Domingo’s National Conservatory-barely enough to cover the cost of hosting it.

Disappointed by the failure but too embarrassed to return to his family in Haiti empty-handed, Thomas jumped on a gig Joseph found him in a small town called Jarabacoa. There, a fine arts organization called MWVA was beginning to cater to a crowd of intellectuals with interest in live music beyond the typical Merengue, Bachata and Reggeaton that blares each night from nation’s discotecas. “I couldn’t even spell it (Jarabacoa) because I didn’t know anything in Spanish,” Thomas said. But after the warm reception he got by the Dominican crowd and the owner, Thomas decided Jarabacoa was the place to spend the next stage of his musical development. He joined a band that had dabbled in jazz and other lesser-known styles, and he began incorporating Haitian rhythms into its repertoire. “Here we play a jazz footprint, it’s like a 6-8 time. In Haiti the 6-8 is called yanvalou, nago-those are my traditional roots in Haiti,” explains Thomas. “Now they (the other band members) are playing the Latin roots they have here in Merengue, and I’m playing the Yanvalou.”

Like other young musicians from developing nations who dream of crafting their style in music schools abroad, Thomas aspires to attend Berklee in Boston. Until then, he says this small Dominican town will serve as his experiment in testing his music abroad. “I need Jarabacoa to represent not only an art, but to represent a jazz place, started by a Haitian named Johnbern with MWVA,” Thomas said. “I’m trying to make jazz more popular here.”

But as Haiti’s jazz scene attempts a comeback during the International Jazz Festival planned for January, Thomas hopes it won’t be too long before he finishes his experiment in Jarabacoa and comes home. “I admire his ambition and I hope that he is successful,” says Goldberg. “On the other hand, his home country also needs him, and I do hope that he eventually moves back to Haiti and uses his experience to help build and rebuild the music scene both in PAP and around his home country.”

In its near-century of excellence, The New Yorker has been home to more than its share of tops-in-their-field contributors. There’s E.B. White, with his luminous … END_OF_DOCUMENT_TOKEN_TO_BE_REPLACED

Put a “the” in front of a name and it acquires historical heft. The Thelonious Monk who entered New York City’s WOR Studios as Halloween … END_OF_DOCUMENT_TOKEN_TO_BE_REPLACED

On the enchanted evening of August 16, 1958, Ella Fitzgerald took to the stage of the legendary Hollywood Bowl. There, with a lustrous orchestra conducted … END_OF_DOCUMENT_TOKEN_TO_BE_REPLACED

Be careful what you wish for.  By the beginning of 2020 guitarist Mary Halvorson, one of the most acclaimed musicians of her generation, was also … END_OF_DOCUMENT_TOKEN_TO_BE_REPLACED