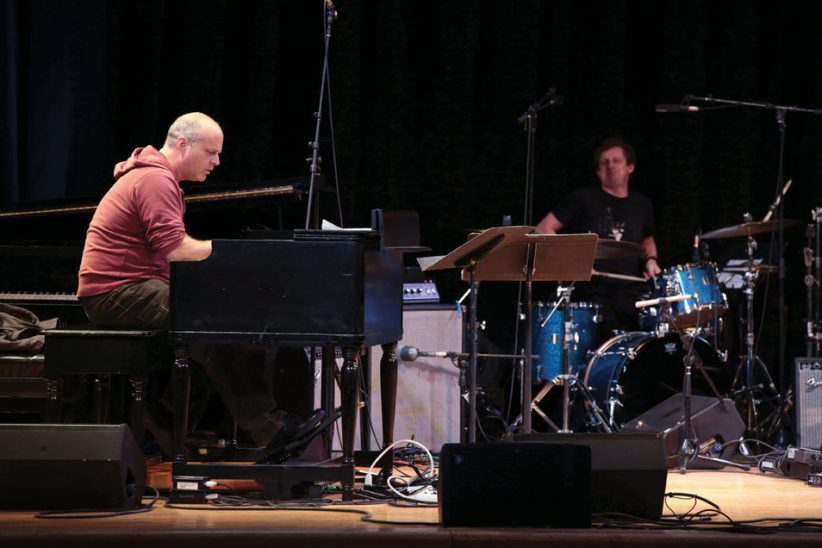 Now 60, composer and saxophonist John Zorn is the creator and curator of a specific yet far-reaching strain of the musical avant-garde-his own genre, his own nation. He transcended comparisons to other improvising musicians long ago: Far better to draw lines from the quintessential Downtowner to, say, filmmakers Robert Altman and John Cassavetes, in his repeated use of a trusted, versatile troupe of his design. Or to Baroque composer Georg Philipp Telemann, for his laughably prolific output. Or to any number of artists who’ve expanded the parameters and function of ethnic tradition.

Those facets and more were laid out on March 19 at New York’s Town Hall, where Zorn premiered the first 20 compositions from his third Masada songbook, titled The Book Beriah. The nearly three-hour-long program, part of Town Hall’s Newish Jewish Music Festival, acted as an entrée into the Zorn universe as it exists in 2014-a primer on its current characters and the composer’s recent predilections.

Masada, a repertory Zorn has been creating for more than two decades now, will be completed with this third installment. As he explained, the first book contained 205 compositions, the second 316 and the third will have 92, for a total of 613 tunes: the number of mitzvoth, or commandments, in the Torah. That’s a pointed plan, seemingly more deliberate than the Masada music itself, which relies on the general notions and modalities of Jewish folksong and can filter through any number of styles. It’s often consonant and full of momentum-action-packed, reasonably concise, easily enjoyed. Most important, Masada songs allow the ensemble performing them to maintain or create an identity. When you have Zorn’s resources in terms of personnel, you want the material to bend toward the musicians.

So Fieldwork, with saxophonist Steve Lehman, pianist Vijay Iyer and drummer Tyshawn Sorey, stayed its stern, measured and intellectualized self on “Ge’ulah.” Organist John Medeski, interpreting “Pirke Avot,” grooved with aplomb in a duo with drummer Jim Black. Jamie Saft’s New Zion Trio with bassist Brad Jones and drummer Craig Santiago didn’t have to abandon its Kingston-meets-the-conservatory aesthetic. Violinist Mark Feldman and pianist Sylvie Courvoisier performed “Shadim,” and with its twitchy flow and experimental techniques, it could have come from their own well of original music. Zion80, playing “Hod,” closed the first half of the show with its culturally amorphous party music-klezmer and Afro-beat overlapping funk and Afro-Cuban.

But it was another, fiercer element that defined this night, and it somehow represented Zorn more directly than several of the performances by his longstanding comrades. Four very loud, virtuosic guitar-touting groups-Many Arms, Cleric, Abraxas, Secret Chiefs 3-actualized the Masada m.o. of fusing the ancient and the contemporary: They zigzagged through tricky, rapid-fire klezmer-like melody in unison and harmony as if they were prog-rock-Dave Tarras, the Soft Machine and hardcore on equal footing.

The man of the hour played nonchalant emcee but did get in on the action, and the results were two of the evening’s undeniable high points. Zorn’s Aleph Trio (Shanir Blumenkranz, bass; Ches Smith, drums) plus guitarist Marc Ribot returned to an earlier Masada through-line, from klezmer to Ornette Coleman’s intuitive, beautifully abrasive version of the jazz avant-garde. And the Masada String Quartet, which Zorn conducted seated within the ensemble, served as a reminder of how gorgeous and lucid the man’s writing can be. Some are exempt from the clichéd principles of quality and quantity, after all.

When you’re on TV, everybody knows you, or at least thinks they know you. Take Kevin Eubanks, who was on NBC’s Tonight Show five nights … END_OF_DOCUMENT_TOKEN_TO_BE_REPLACED

Jimmy Katz leads many lives. He is the preeminent currently active jazz photographer, and has shot more than 200 magazine covers and over 600 recording … END_OF_DOCUMENT_TOKEN_TO_BE_REPLACED

Take a look at Blue Note Records’ release schedule for 2022 and it’s hard to miss the significant percentage of electronic-oriented music. In March, the … END_OF_DOCUMENT_TOKEN_TO_BE_REPLACED