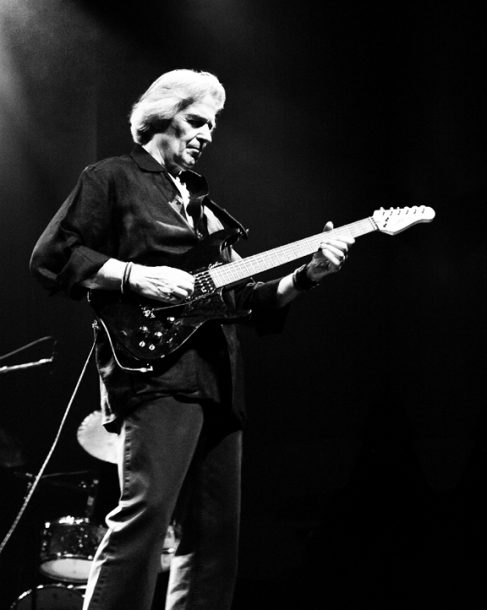 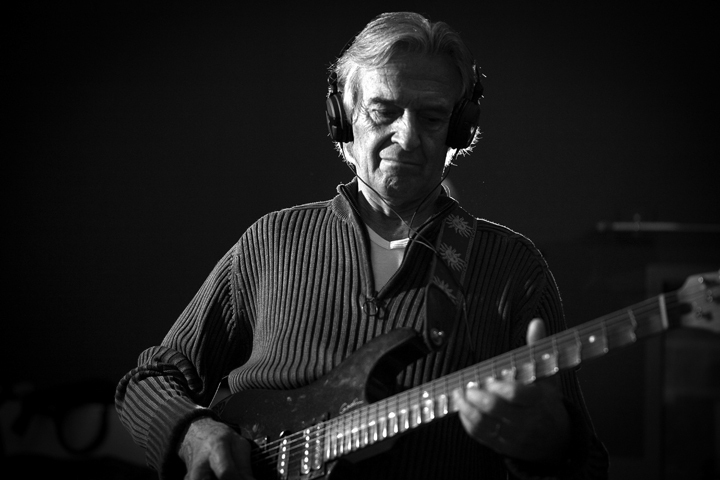 In February 1965, 23-year-old John McLaughlin had already been a professional musician for seven years, having left his Yorkshire village in 1958 for Manchester and then for England’s capital. He had been playing guitar with three of the top bands in London’s nascent R&B movement: Georgie Fame & the Blue Flames for much of 1962, the Graham Bond Quartet (featuring Jack Bruce and Ginger Baker) for much of 1963, and the Brian Auger Group (featuring Rick Laird) for much of 1964.

But McLaughlin was growing frustrated, not just with the routine of playing rave-ups over simple blues changes, but also with his family heritage of lukewarm Christianity and the “Swinging London” culture of drinking and skirt-chasing. He longed for music and a way of life as inspiring as Miles Davis’ Milestones, the album that had propelled McLaughlin into a full-time music career. So that February, he picked up the new album by the tenor saxophonist on the Milestones sessions: John Coltrane’s A Love Supreme.

“That record really twisted my head around,” he says by phone from Tbilisi, Georgia. “I’d been listening to him since ’58, but this was a giant step, so to speak. I heard something I couldn’t grasp as a musician; I felt the tremendous intelligence, the great heart he had together with his great musicianship. But I couldn’t understand it because of my musical ignorance and my own personal immaturity. I was 23 and struggling to find my musical identity but also my spiritual identity, which are really the same thing.

“What I could understand, what really impressed me, was the poem on the back of the album cover. I was struggling with these existential questions: Who am I? Who is God? What is the universe? This poem, a prayer really, affected me, and I realized the music expressed the same emotion. That gave me a way into the music. It took a year for me to really hear that music; that’s how dumb I was.”

If ever there was a pivotal point in McLaughlin’s career it was that chilly February day in a London flat, when the young guitarist held the gatefold LP cover of A Love Supreme in his lap as the black vinyl spun round and round on the stereo. Almost everything ahead of him in his career-the virtuosity and speed, the rhythmic complexity, the quest for a unifying vision of spirituality, the blend of Indian ragas, American blues and postbop-was tumbling out of those speakers. Even as the guitarist went on to play with Tony Williams, Miles Davis, Chick Corea and Paco de Lucia, and to lead such bands as the Mahavishnu Orchestra, Shakti, the One Truth Band and the 4th Dimension, he was still exploring the different possibilities suggested by Coltrane’s masterpiece.

McLaughlin was reminded of this in 2009. It was five months after he’d come home from an album and tour with the Five Peace Band, which also featured Corea, Kenny Garrett, Christian McBride and Vinnie Colaiuta. The guitarist was on vacation with his family in Spain, glad to have no obligations before him-no tours, no recording sessions. He was enjoying dinner at a restaurant when his head was suddenly flooded with music. “One second earlier there’d been nothing,” he explains, “and the next there was this lovely idea in my mind, this music I’d never heard before. I started grabbing napkins and writing ideas down as fast as I could. I’ve learned from experience that you can’t say, ‘I’ll let it go and get back to it later,’ because it’s a will of a wisp. It’s there one moment and then it’s gone; you have to grab it while it’s there. So I kept telling my wife, ‘Give me another napkin.’

“I was writing down melodic phrases, chord changes, riffs. The opening line of ‘Discovery’ came in, then the second line, then the third line. I heard the melody for ‘The Fine Line,’ then the bassline, and that bass part became the introduction. ‘Special Beings’ came with harmony, so I’m writing out chords. I didn’t sit down and say, ‘I’m going to do this; I’m going to do that.’ The music came in and I said, ‘I’m not going to mess with it.'”

Over the next few months, the ideas kept coming and soon he had six finished-but-still-untitled compositions: two older ideas (“Lost and Found” and “Recovery”) that were finally realized and four (the three above and “To the One”) that had come to him at the restaurant or soon after. There was something about the new music that reminded him of A Love Supreme, but he couldn’t quite put his finger on the connection. “I didn’t have any titles, just music,” he points out. “Then, last October, I woke up, and the liner notes were in my head and the titles of all the tunes. It was 3:30 in the morning. I said, ‘I’ll write it down in the morning,’ but this voice said, ‘No, get up now.’ So I padded out to the living room and wrote it all down, just as if I were taking dictation. Even the liner notes reminded me of A Love Supreme.”

“Words, sounds, speech, men, memory, thoughts, fears and emotions-time-all related … all made from one … all made in one,” Coltrane wrote on the inside cover of his gatefold album. On the inside back cover of his 2010 CD, McLaughlin wrote, “From time to time, I have had glimpses of the indescribable loveliness of the infinite one. We can never be apart from the infinite oneness even though we may be unaware of this unity.”

Whatever these two credos lack in literary craft, they make up for in theological fervor, a passion that fuels the accompanying music. But what are non-believers to make of these ill-defined references to the “one,” and what does that concept have to do with the emotional pull of this music? If we are all part of an “infinite oneness,” why does Coltrane sound so utterly different than any other saxophonist? Why does McLaughlin sound unlike any other guitarist?

Most of us, even atheists, have experienced a connection to something larger than ourselves: the common properties of human nature in every person, the shared connections between every plant and animal. Such a transcendent encounter with human nature or non-human nature can be profound, and we yearn to put a name on it, even if phrases such as oneness, spirituality, DNA, God or the collective unconscious seem vague, clumsy and unsatisfying. Perhaps that’s why we so often turn to instrumental music for an echo of that experience.

That thing, whatever we call it, may be universal, but our responses are as different as each human being, and some of us are better than others at articulating those reactions. That’s why Coltrane and McLaughlin sound so very individual even when confronting an omnipresent force. McLaughlin even admits that he’s been better able to translate that experience into music at some points in his life than at others. In fact, the titles that awoke him from sleep in the middle of the night tell the story of his waxing and waning ability to tune in the “one.” “The titles came to me in order and told a story,” he explains. “‘Discovery’ is obvious; it’s about finding this great interior territory. ‘Special Beings’ is about the debt I owe to all these great people who showed me the way to self-awareness. ‘The Fine Line’ is about trying to find altered consciousness without chemical help.

“Once you’ve been on the path to some kind of self-awareness, it’s impossible to forget it. I’ve dropped off, gotten on and fallen off; for 15 years I’ve been on the path, and I don’t think I’ll fall off again. ‘Lost and Found’ and ‘Recovery’ are about that. ‘To the One’ is about my own personal conviction that separation is just an illusion. We’re connected to every single thing; everything everyone does, including me, is all one thing.”

At 95, Chicago-based guitarist George Freeman is among the world’s oldest active jazz musicians. Although he came of musical age in the 1940s and counts … END_OF_DOCUMENT_TOKEN_TO_BE_REPLACED

When you’re on TV, everybody knows you, or at least thinks they know you. Take Kevin Eubanks, who was on NBC’s Tonight Show five nights … END_OF_DOCUMENT_TOKEN_TO_BE_REPLACED

Jimmy Katz leads many lives. He is the preeminent currently active jazz photographer, and has shot more than 200 magazine covers and over 600 recording … END_OF_DOCUMENT_TOKEN_TO_BE_REPLACED