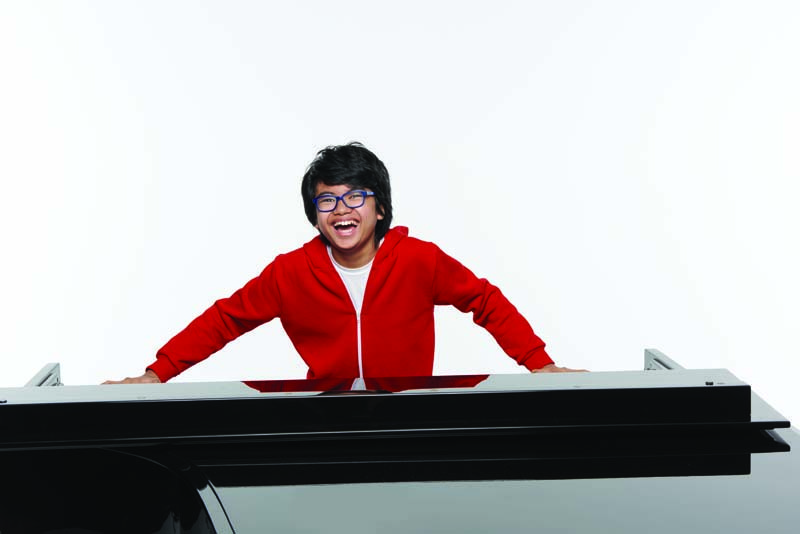 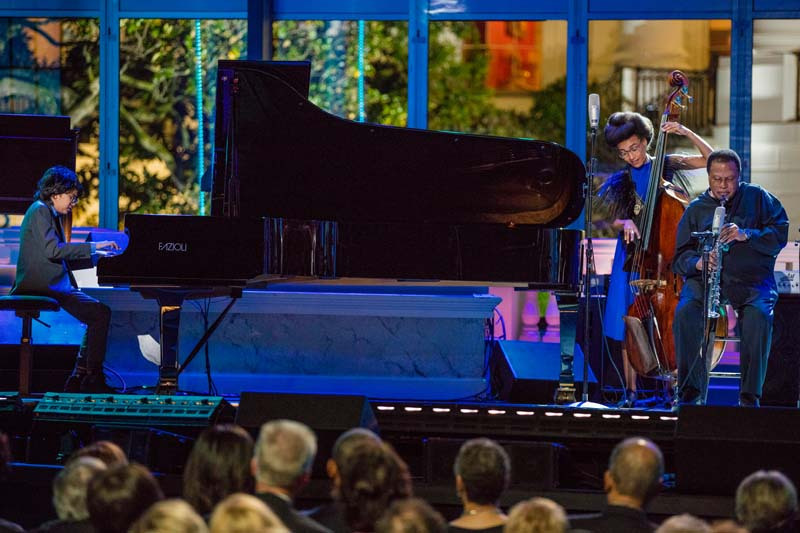 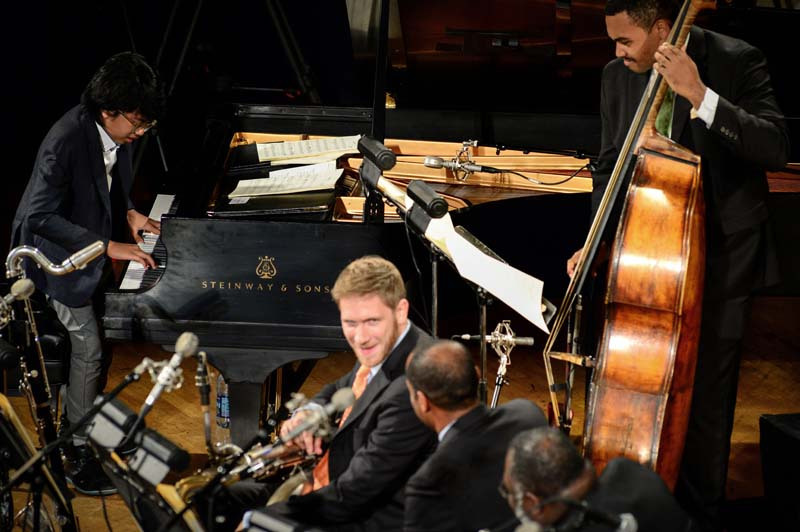 At the Town Hall in October, Alexander impresses the Jazz at Lincoln Center Orchestra 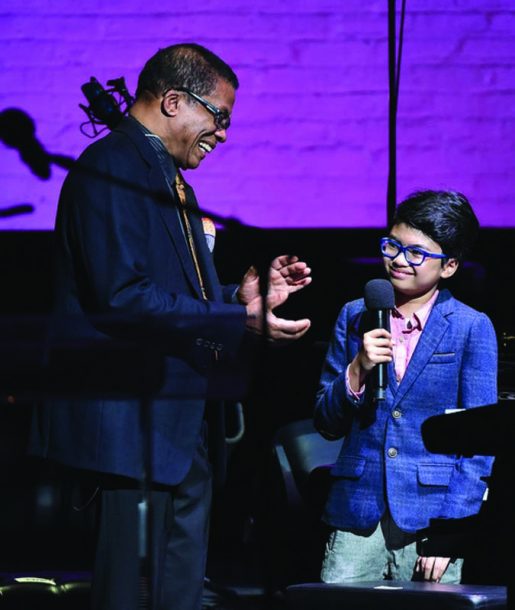 Alexander addresses his hero Herbie Hancock at the Apollo in 2014 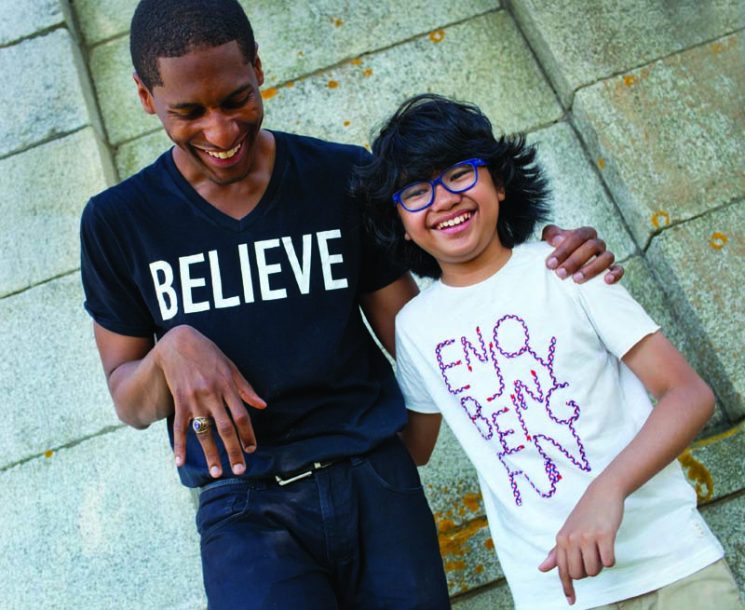 Alexander pals around with Jon Batiste at Newport in 2015

He’s seen and done some remarkable things since the release of his auspicious debut, My Favorite Things (Motéma), which hit No. 1 on Billboard‘s Jazz Albums chart and garnered two Grammy nominations, for Best Jazz Instrumental Album and Best Improvised Jazz Solo. Joey performed twice at this year’s Awards, rampaging with a trio during the pre-telecast ceremony and later finessing a solo piano number on the network broadcast, to a standing ovation.

He has also toured the world, met many of his musical heroes, and appeared as a featured guest with the Jazz at Lincoln Center Orchestra at Town Hall. He has been touted by a staggering range of media outlets, including some that rarely cover jazz. In the summer of 2015, when he made his debut at the Newport Jazz Festival, Joey was trailed by a camera crew from CBS’ 60 Minutes. At one point in the resulting segment-a 13-minute profile titled “Little Jazz Man”-Wynton Marsalis offered an appraisal of his talent. “I’ve never heard anyone who could play like him,” Marsalis said, a moment before the word “genius” was tossed about.

Then there was the White House, where Joey joined an all-star coterie for the International Jazz Day All-Star Global Concert in late April. He performed in an ad hoc trio with the august saxophonist Wayne Shorter and the exuberant bassist Esperanza Spalding, fashioning a peekaboo elaboration on Shorter’s “Footprints.” Discursive and shimmery, flowing with a loose tether to song form, it stood as a high point of the gala event. The responsive and subtly exploratory quality of the pianism had a lot to do with that.

Two weeks later, Joey and his parents, Denny and Fara Sila, are recalling the swirl of Jazz Day over lunch in Manhattan’s East Village. “We had just got back from Abu Dhabi,” says Denny, who’s soft-spoken but amiable, and the person most deeply involved in Joey’s musical development. “Yeah,” says Joey, chuckling. “Kind of jetlagged.”

“From Abu Dhabi, they picked us up at the airport and took us straight to the White House,” Denny adds. “Wayne was already there with Esperanza. They were ready, waiting for him.”

The rehearsal preceded a taping in the White House foyer-and judging by the tenor of Joey’s comments, performing with Shorter was even more awe-inspiring than meeting the President of the United States. “Well, I never imagined I would play with him,” Joey says. “And his music is so free. It was hard for me to adjust to. But, you know, I was just trying to dig in with him.”

Asked to reflect on the overwhelming blur and balancing act of the past 12 months or so, Joey-whose second album, Countdown, was due out on Motéma in September-smiles obligingly. “It’s a lot, for sure,” he says. “It’s kind of hard, but I try to manage it well.”

There isn’t really any way to talk about Joey Alexander-born Josiah Alexander Sila in Bali, Indonesia-without stumbling over the word “prodigy.” This is both a blessing and a curse. But the facts of the case are incontrovertible: Joey was a baby-faced 8-year-old when he first played in Jakarta for Herbie Hancock, who was there as a UNESCO Goodwill Ambassador. The following year, he entered and won an all-ages jazz competition in Ukraine.

He was 10 when one of his YouTube videos caught the notice of Marsalis, who arranged for him and his family to be flown to New York so he could perform at Jazz at Lincoln Center’s annual gala. From that moment, more opportunities arose: Motéma made Joey the youngest signing to its roster, and an array of wealthy, well-connected New Yorkers began to help the Sila family with visas, expenses and housing (they currently reside in SoHo). When the family is on the West Coast, they often stay in Sausalito, Calif., at the home of novelist Amy Tan.

Joey, who speaks with a softly lisping accent, exudes an innocence that can inspire protective urges among his supporters. “He’s such a little kid,” said Larry Grenadier, who plays bass on both of Joey’s albums. “This is the beautiful thing about him. He maintains this kid thing and he balances it with the extreme maturity of his musical ability.”

The disjunction between a childlike demeanor and a mature artistic expression is an obvious hallmark of child prodigies, who have a mixed history in jazz. “My experience has been that 80 to 90 percent of prodigies don’t go ahead and succeed,” Gary Burton, a former boy wonder on the vibraphone, told me a few years ago. “Something either happens or doesn’t happen as you go from adolescence into adulthood. Some people just stop right there and don’t go any further. You always have your fingers crossed when it’s someone who is super-talented as a kid.”

You could point to Burton as a glowing exception, of course. You could also point to a few of his protégés-like guitarist Julian Lage, who waited years and turned down many offers before releasing his first album. A while back I asked Lage what advice he would offer a child prodigy like Joey, and he quickly hit upon an ideal of gracious humility in the face of public acclamation. “When people say, ‘You’re the greatest thing ever,’ that says way more about the person saying it than you,” he said. “It moves them. People like to share that with you. I do think it’s liberating to know that what anyone says doesn’t equate to any pressure at all. It’s a wonderful thing; it happens alongside you getting better.”

I had this whole complex calculus on my mind when I first wrote about Joey, producing a profile that lauded his extraordinary talent while confessing to some critical ambivalence. In one indication of his undeniable appeal as a human-interest story, the piece ended up on the front page of the New York Times. And by sheer coincidence, my lunch with Joey and his parents takes place one year to the day after its publication, which boosted his celebrity even as it sharpened the skepticism in some corners of the jazz community.

On April 19, 1952, the Gene Krupa Jazz Trio—Krupa at the traps, Charlie Ventura on tenor and bass saxophones, and Teddy Napoleon on piano—became the … END_OF_DOCUMENT_TOKEN_TO_BE_REPLACED

For drummer Willie Jones III, Fallen Heroes is more than just the name of his most recent album. The title also relates deeply to his … END_OF_DOCUMENT_TOKEN_TO_BE_REPLACED

Beloved for his many cool collaborations with Tim Berne, John Zorn, and Marc Ribot, drummer/improviser/composer Ches Smith is best served hot, under his own name—on … END_OF_DOCUMENT_TOKEN_TO_BE_REPLACED

A musician’s musician, trombonist Ed Neumeister has not only played with several of the great big bands in modern jazz—including those led by Ellington, Hampton, … END_OF_DOCUMENT_TOKEN_TO_BE_REPLACED