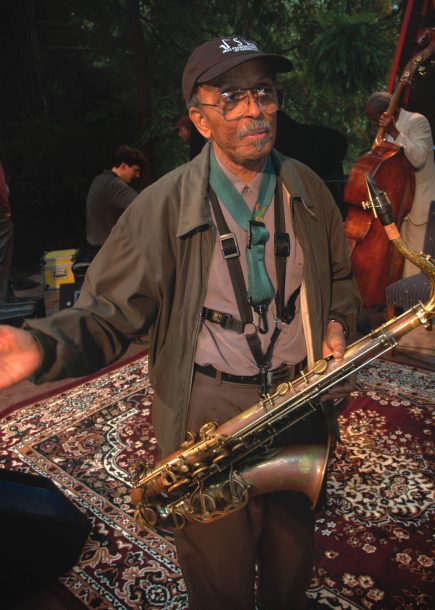 Beloved by his bop-era colleagues as well as generations of disciples, veteran saxophonist-composer-arranger Jimmy Heath is an active octogenarian on the scene, still swinging after all these years. At age 83, the NEA Jazz Master (Class of ’03) is blowing potent lines on both tenor and soprano saxophones, as evidenced by two recordings from 2009: the Heath Brothers’ Endurance (JLP) with Albert “Tootie” Heath on drums, David Wong on bass and Jeb Patton on piano; and the Dizzy Gillespie All-Star Big Band’s live outing, I’m BeBoppin’ Too (Half Note).

Endurance was the first Heath Brothers project since the passing of brother and bassist Percy in May 2005. (As the saxophonist says, using humor to offset hard reality, “Two out of three ain’t bad!”) The album finds Jimmy in top form, bearing down with fluent tenor lines on his buoyant opener “Changes” and on his urgent shuffle-swing number “Wall to Wall,” flaunting robust tenor tones on the poignant “Ballad From Leadership Suite,” and switching to soprano sax on Patton’s engaging “Dusk in the City.” He navigates the tricky head of “Two Tees” with ease before delivering a smoky, burnished sound on “Autumn in New York.” The diminutive (5-feet-3-inches) jazz giant concludes the set with a strong tenor performance on “The Rio Dawn,” his musical impression of his first visit to Brazil in 1982.

While clearly in full command of his instrument, Heath has also been showcasing his considerable writing-arranging and conducting skills with his celebrated big band-most recently documented on 2006’s Turn Up the Heath on Planet Arts. In this regard, he’s come full circle from his first leader experience in 1946, the Jimmy Heath Orchestra, which featured a very young John Coltrane on alto sax. “I still love big band,” he beams. “I was raised up with that sound. After Duke Ellington and people like that, how can you give that up? The only problem is transporting a big band because it’s so expensive. But there are still nuts out here like me, Maria Schneider, Slide Hampton, Jon Faddis, Frank Foster, the Vanguard Orchestra and some others who believe in the big band. This is our symphony orchestra. And from an arranger’s point of view, it’s so satisfying because we can get so many musical textures and sounds out of a big band with the pairing of instruments. It’s endless.”

Heath, in fact, wrote an extended piece for the Seattle Repertory Jazz Orchestra called “The Endless Search,” which premiered in 2006 (an excerpt can be heard at www.srjo.org). “That’s what my life is about … the endless search,” he says. “As long as I’m here I’m gonna be trying something.”

One intriguing project on Heath’s horizon is a hip-hop-big-band experiment featuring his son Mtume and grandson. “We had a proposal that involved three generations of the Heath family,” he explains. “My grandson is going to come in with some beats and all that. You know, I don’t have blinders on, I’m still open to new sounds and ideas. My problem with a lot of today’s contemporary music is that in my day we were looking for artistic excellence and now they seem to be into narcissistic decadence. … But we just want to show that this blending of hip-hop and jazz can be done with taste.

Heath reveals the details of his life and illustrious career in his recently published memoir, I Walked With Giants (Temple University Press). Co-written by Joseph McLaren, a former flute student of Heath’s at the Jazzmobile during the early ’70s who is currently an author and professor of English at Hofstra University, this compelling 336-page book captures the essence of the bebop era from an insider’s view while retaining the saxophonist’s colorful storytelling style. From his first touring experiences with the Calvin Todd and Nat Towles orchestras to early gigs with the Howard McGhee Sextet and Gil Fuller’s band in the late ’40s, we see the young musician develop his own sound while dealing with dispiriting acts of segregation and racism on the road.

We read about his stint with mentor Dizzy Gillespie in 1949-50, followed by a gala tour in 1952 with the Symphony Sid All-Stars. We follow Jimmy’s progress from his brief tenure with Miles Davis in 1959 (as a replacement for Coltrane) to his marriage to Mona Brown (they recently celebrated their 50th anniversary) and the eventual formation of the Grammy-nominated Heath Brothers band. Through it all, the middle Heath brother-Percy was the elder sibling-spares no detail.

Most gripping is Heath’s account of his heroin addiction and arrest for possession and sales, leading to his incarceration in 1955 at the Lewisburg Penitentiary in Pennsylvania. As he writes: “They charged me as a second-time drug offender for drug sale. When I went before Judge Lord, I was told that each sale had two counts-selling, facilitating, and resale, so I had six counts. I got six years on each count, but the first five counts ran concurrently, so I had a six-year sentence.” He chronicles his kicking the heroin habit and organizing a prison big band while in jail, and explains how brother Tootie smuggled his new compositions out of prison and delivered them to Chet Baker, who included a few on his 1956 album Playboys.

In an interview at his home in Corona, Queens, where he and Mona have been living since 1964, Heath commented on those tumultuous times: “Yeah, Dizzy fired me and then he hired me back after I straightened my life out. Because I was a sick man, you know? That’s what it is. It’s a sickness that’s very difficult. But in retrospect, I think it was a blessing that I went away to get straight. I just thought four and a half years was too long, man. It definitely stifled my career, but it also saved my life. My career I could get back. My life … I got to have my life. And when I look back, a lot of my peers didn’t make it. Charlie Parker was only 34, man, and he was outta here! He left the world with a wealth of music, but he doesn’t get his life back. Coltrane died at 40. We were boys together in Philly, man! And so many others died young. So being in Lewisburg was a blessing in disguise. I learned from that never to do that again, and I didn’t.”

Upon being released from prison on May 21, 1959, Heath almost immediately began working regularly around Philadelphia with trumpet great Kenny Dorham. He also picked up a high-profile gig in June of that year at the Apollo Theater with the Gil Evans big band. Cannonball Adderley, who had championed Jimmy’s cause during his period of incarceration, recommended Heath to Orrin Keepnews, who quickly signed the saxophonist to Riverside after his release and presided over 1959’s The Thumper and 1960’s Really Big! But even though he was out of prison, Heath was not entirely a free man. When he couldn’t make a gig in Chicago, a condition of Heath’s probation requiring him to remain within a 50-mile radius of Philadelphia ultimately foiled his chance to work with Miles Davis. As he writes, “I told my probation officer, ‘I got the best job I ever had in my life. I’m making a lot of money, five or six hundred dollars a week. You’re cutting me off from making my livelihood.’ And he said, ‘I can’t do anything about it.’ He had just given me permission without checking-he blamed it on higher-ups in Washington, D.C.-and now he found out that he shouldn’t have. Miles was very disappointed, but he had friends in Philly. He tried everybody he knew with authority in Philadelphia, but no luck. … Now I had a job, an opportunity to be with one off the best bands in the land and in the world, and I couldn’t go. I was being penalized for my past.”

Fifty years later, Heath’s many awards, trophies, citations, medals and plaques are piling up in his computer room, where he works on his big-band arrangements and extended compositions (using Finale software on his Mac). “Plaques? I got more plaques than people got on their teeth,” he jokes. On prominent display in this cluttered workroom is a large framed picture of Charlie Parker sitting as a guest soloist with Heath’s big band, circa 1946 (with a youthful John Coltrane in the horn section on alto).

As far as the state of jazz in the year 2010 and in the future, Heath remains hopeful. “There are some artists out here that are leading young players into something that doesn’t swing,” he says. “They think it’s hip to change up, but all changes are not good. You have to be careful about throwing away everything to get to something new. But I also know, from going around to schools like Queens College and Loyola in New Orleans and judging the Thelonious Monk Saxophone Competition, that there are some very good young players out there who are steeped in the tradition and ready to take the music forward.”

As for his own accomplishments over his lengthy career, Heath has never thought of himself as a star, a term he actually disdains. “I’ve always been one of the guys, and I like that,” he says. “To be respected by your peers, you can’t ask for anything better than that.”

At 95, Chicago-based guitarist George Freeman is among the world’s oldest active jazz musicians. Although he came of musical age in the 1940s and counts … END_OF_DOCUMENT_TOKEN_TO_BE_REPLACED

When you’re on TV, everybody knows you, or at least thinks they know you. Take Kevin Eubanks, who was on NBC’s Tonight Show five nights … END_OF_DOCUMENT_TOKEN_TO_BE_REPLACED

Jimmy Katz leads many lives. He is the preeminent currently active jazz photographer, and has shot more than 200 magazine covers and over 600 recording … END_OF_DOCUMENT_TOKEN_TO_BE_REPLACED