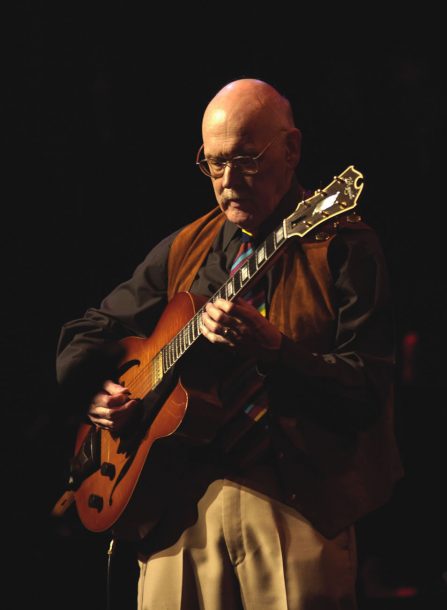 On a sunny autumn afternoon in Greenwich Village, a kindly looking gentleman with spectacles and white mustache leads a peppy little Shih Tzu dog around on a leash. Many of the residents in this charming neighborhood know him as a local. Workers at the Jefferson Market wave to him as he strolls by. To them, he’s the sweet, elderly chap with the twinkling eyes, quick smile and a dog named Django. To jazz fans, and especially guitar aficionados, he’s a giant–a revered elder who has played on a spate of historically important recordings.

At home in his apartment on West 12th Street, Jim Hall is reminiscing about fabled sessions and legendary colleagues, many of whom have passed away. Black-and-white pictures of himself with fellow guitarists Tal Farlow and Jimmy Raney line one shelf. On another shelf is a nostalgic photo of Sonny Rollins’ quartet in action, circa 1962, with a young Hall, Bob Cranshaw and Billy Higgins on the bandstand. Hanging on the wall is a framed photograph of Hall’s wife, Jane, dancing with Duke Ellington at the White House’s 1969 tribute to jazz. “I found out later that Duke disliked Nixon so much that he wasn’t even going to go to that thing,” Hall says. “He actually had booked another gig so he could sneak out, but I think his manager talked him into staying.”

Almost everybody has seen it: Sailor Sabol’s spectacularly out-of-tune rendition of “The Star-Spangled Banner” at the February 2021 CPAC convention. Dozens of videos are circulating … END_OF_DOCUMENT_TOKEN_TO_BE_REPLACED

In the fall of that notorious election year of 2016, six-time Grammy-winning arranger/composer Vince Mendoza was working on a commission from the Czech National Symphony … END_OF_DOCUMENT_TOKEN_TO_BE_REPLACED

Optimism is an unlikely through line for a jazz statement born, reared, and recorded during a pandemic. But alto saxophonist and composer Steve Slagle can … END_OF_DOCUMENT_TOKEN_TO_BE_REPLACED

For a certain generation of listener, the sound of Gary Bartz’s alto saxophone doesn’t trigger memories of his indelible playing on Miles Davis’ Live-Evil or … END_OF_DOCUMENT_TOKEN_TO_BE_REPLACED