A decade ago, an apprehensive yet thrilled Jihye Lee walked into the Berklee College of Music with no jazz background or knowledge of the English language. A South Korean native, she had never even visited America before moving there. “I wanted to become a composer, that was for sure,” she recalls to JazzTimes about her uncertain freshman year. “But I didn’t know if I should be a classical composer or a film-score composer or a singer/songwriter. I was so afraid and overwhelmed.”

The only available course in her lane was jazz composition, which she declared as a major—despite not knowing Count Basie from Gil Evans from Thad Jones.

What happened next was meteoric. Lee didn’t just rapidly absorb the language of those three jazz giants; within months, she won the school’s Duke Ellington Prize. The following year, she won it again. Today, she’s one of the freshest and most distinctive composers on the New York scene. “I’m not a traditional jazz composer who writes swing tunes or big-band music,” Lee explains. “I’m not saying it’s bad, but it’s just not me. Sometimes I can get insecure that I don’t write music like Count Basie. When people ask, ‘What is jazz?’ I don’t know the answer.” Which reminds her of the time the tenor saxophone titan Wayne Shorter answered the same question in a 2013 NPR interview.

“Jazz shouldn’t have any mandates. Jazz is not supposed to be something that’s required to sound like jazz,” Shorter declared. “For me, the word ‘jazz’ means ‘I dare you.’”

Those three monumental words inspired a tune, “I Dare You,” from the Jihye Lee Orchestra’s radiant new album Daring Mind, which came out March 26 on Motéma Music. Themes of pluck, nerve, and self-actualization soak into nearly every other title on the album—“Relentless Mind,” “Unshakable Mind,” “Dissatisfied Mind,” “Struggle Gives You Strength.” And, true to the album’s title, Lee’s career has been a series of wild leaps—from uprooting her life in South Korea to her work with masters like Ted Nash and Andy Farber at the BMI Jazz Composers Workshop to her current life as a New York City transplant.

“I wrote all the compositions after I moved to New York; it’s my New York life story,” Lee says of Daring Mind. “All of them are speaking about my stories, my thoughts or my feelings while living in New York [since] 2016. I think, mostly, it’s about my struggles as a musician and a human. There are compositions about friendship or love.” Specifically, she’s talking about “Suji,” a tribute to an old friend in Boston, and “GB,” the initials of an ex-boyfriend in South Korea. That relationship lasted long-distance for a while, before it became clear to Lee that her destiny was in America—as part of the jazz world—for life.

“Sometimes I can get insecure that I don’t write music like Count Basie. When people ask, ‘What is jazz?’ I don’t know the answer.”

RANDOM TALENT
Jihye Lee was born in South Korea. Besides an uncle who played the classical flute, hers was not a musical family. “My father and mom never really loved music, except the music that came from TV shows,” she says. No school she attended had an orchestra or band; Lee stresses that no support came from any corner of her community. All of which sounds unconducive to nurturing a musical mind, but Lee has an almost mystical perspective on the subject.

“I’m quoting [Fran Lebowitz], but talent is very fair,” she says. “Somewhere, maybe from heaven, it spreads. It can spread randomly. I liked that when I heard it. That sounds true to me because I don’t know how I got the musical talent or interest.” At five or six, Lee began clicking with music from TV cartoons and playing along with a toy recorder. “That was the only instrument I had, but the recorder was only in the key of C,” she remembers. “I had to develop my relative pitch; that’s how I educated myself.”

When Lee was nine, her parents gave her six months of piano lessons before the cost became prohibitive. She composed, in her words, “two very crappy songs” and dreamt up a notation system for her creations.

“I wrote very cheesy, corny, doesn’t-make-sense-at-all kinds of lyrics, and then I made notes only I could see—going up, going down,” Lee adds. “I’m curious what kind of musician I would be if I had a legitimate musical education when I was young—but I ended up like this! I didn’t think about anything. I just thought of a melody. I wasn’t extraordinary. But I knew I was talented and that I would become a musician for some reason. I think that belief led me through all [my] circumstances.”

In high school, Lee noticed a flyer in the restroom for a rock concert in what she calls a “smelly, nasty” basement club. Lee approached the girl who hung up the poster, and she brought Lee to the show. Despite the squalid conditions, she was hooked. “All these students were playing rock guitar and drums, and I said, ‘I want to do that!’ I actually wanted to be a singer at the time, but I was so shy that I said, ‘I want to play guitar!’”

Lee then picked up the instrument for a year, copying guitarists like Slash from Guns N’ Roses. But after a year, rote finger exercises grew stale, and she quit the guitar altogether.

All the while, what compelled her most wasn’t any particular instrument but the fundamental relationships between harmonies and rhythms. Lee’s early music education was at Dongduk Women’s University, where she earned a degree in voice performance. For a while, she found local success as an indie-pop singer. But Lee’s dissatisfied mind won out—and it led her half a world away, to New England.

“It’s funny because right before I moved to America, my life was pretty good,” she says. “I had good jobs, I was able to support my life. I had a lot of students; I’d made an album; I was gigging. But the musical environment wasn’t making me happy, so I needed to find something that could make me happy.”

By then, Lee was in her mid-twenties. She was undeterred in her decision to move to America. “I wasn’t a young student,” she says. “I had already developed my life, personality, and character, and my parents knew I wouldn’t listen to them.” So she boarded a plane to the United States with a couple of suitcases and moved into a college pad in Boston with two housemates.

PROGRESS IN MIND
After winning the two Duke Ellington awards, Lee felt emboldened to keep climbing the jazz ladder. She put together a band and made her live debut as a leader at the Shapeshifter Lab in New York in 2016. A year later, she released her first orchestral album, April, inspired by a tragic 2014 incident in Korea where a ferry traveling from Incheon to Jeju capsized and sank. One hundred and seventy people made it out alive, but more than 300—mostly students at Danwon High School—did not.

The news shook Lee to her core at the time. “The government didn’t properly take care of it,” she says. “All the people in Korea were mad, and I was one of them.” All through writing April, Lee noticed eerie synchronicities and coincidences. “Right before the ferry wreck, I was writing a composition called ‘April Wind,’” she notes. “The previous composition, which was my first, was called ‘Deep Blue Sea.’” Lee even realized her apartment number, 304, matched up to the number of the dead.

April received rave reviews; All About Jazz deemed it “thought-provoking and gut-wrenching all at once” and “simply unforgettable.” Despite this, Lee—true to the semi-obsessive creator’s nature—feels it could have been much better. “It has its own charm, but as a mature composer, I’m thinking, ‘Oh, I should have done that! I should have done that!’ I like the idea and concept, but I wish I would have paid more attention to the details and voicings.”

In 2018, Lee won the Charlie Parker Composition Prize at the BMI Jazz Composers Workshop Concert, an incubator for big-band leadership talent founded more than three decades ago by trombonist and educator Bob Brookmeyer. Darcy James Argue, who leads the 18-piece big band Secret Society, was on the prize’s judging panel that year. “Jihye had a very original and focused style that was different from everybody else who was writing for BMI,” he tells JazzTimes. “She had a clear idea in her own mind of what she wanted her music to be and a real voice very early on in her writing. That’s something I always find attractive in the music of any composer. It made me want to keep tabs on her as her career has developed, and I’m glad I did.”

Daring Mind grew out of Lee’s experience at BMI. The album consists of selections from a series of her compositions, the “Mind” Series; “Unshakable Mind” was the tune that won the Charlie Parker award, and “Revived Mind” was a BMI Manny Albam Commission. For the producer’s chair, Lee chose Argue. Trumpeter Sean Jones and trombonist Alan Ferber also played significant roles. Because the ensemble only had two days to record, time was the operative factor during the Daring Mind sessions.

“With any big-band recording, the biggest challenge is trying to keep an eye on the clock and keeping things moving forward and productive,” Argue says. “I always tell the leader that their job in the recording session is to conduct the band, and that’s a difficult enough job as it is. They need to keep focused on that aspect of the performance, [ensuring] they are communicative and rigorous and taking care of business as a conductor. Let me keep an eye on the clock.”

It’s a cold March Friday night in New York City, but the crowd inside the Village Vanguard crackles with warmth as it engages with the … END_OF_DOCUMENT_TOKEN_TO_BE_REPLACED

When you hear tenor saxophonist Mark Turner’s name in conversation, it seems to be frequently linked to the notions of mindfulness, precision, and fastidiousness. “That … END_OF_DOCUMENT_TOKEN_TO_BE_REPLACED

Jazz films have a tendency to let you know that they’re very much about jazz. The medium—and the clichés associated with it—can become a hook … END_OF_DOCUMENT_TOKEN_TO_BE_REPLACED 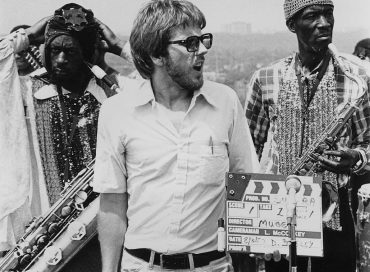 The last 10 years have seen a remarkable upsurge in the number of documentaries focusing on jazz—films about artists both deceased (Miles Davis, John Coltrane, … END_OF_DOCUMENT_TOKEN_TO_BE_REPLACED