Skip to content
Become a member and get exclusive access to articles, live sessions and more!
Start Your Free Trial
Home > Features > Jerry Pashin: A Talk With “The Legend” 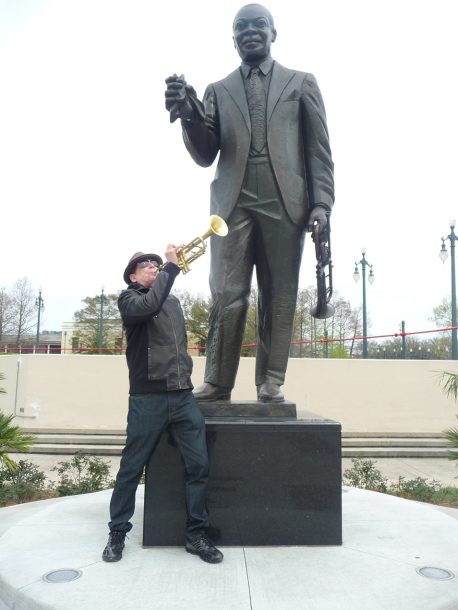 When Jerry Pashin was 16, his father brought him to see and hear Louis Armstrong and the All-Stars at the Lambertville Music Circus in Lambertville, N.J. It was June 1964 and Pops was fresh off his number-one single, “Hello, Dolly.”

“After the show,” remembers Jerry, “I lied my way backstage and spent about 10 minutes with Louis. If I knew then what I knew now, I would have kissed him. On stage and on record he was a god. Up close his age was apparent. He signed an autograph for me, which I still have.”

Always willing to speak with his fans, Armstrong asked the boy a series of questions: Do you play trumpet? Do you practice every day? Do you work on scales? Do you work hard in school? “He asked the questions a father would ask,” says Jerry. “He showed such a genuine interest in me. Louis was patient to listen to all that I had to say.”

After signing his autograph, Armstrong thanked the boy. “We shook hands and then Louis hugged me. He looked upward as he did so. I left, never to be the same.”

Retired music teacher and New Jersey trumpet legend Jerry Pashin is a true believer in the life force of jazz. “Through all of this, I learned how to listen. If you never learn to listen, you’ll never learn how to play.”

As an adult, Pashin was once approached by a psychic after a gig. “Turns out she had worked with various police departments to solve cases and was bona fide. She thought for a minute and said, ‘Did you meet Louis Armstrong?’ I freaked out. I told her the story of how I met Louis and how he hugged me and glanced up before I left. The psychic told me that Louis had spiritually blessed me and infused me with his creative powers.” Jerry shrugs. “No, I can’t play like him, but Louis instilled his work ethic and sense of flamboyance into me. He was so fatherly that I loved him then and love him now.”

Pashin began his 32-year music-teaching career in 1971 in the Matawan-Aberdeen (New Jersey) School District. “My first 28 years I worked exclusively in the elementary grades, where I taught band instruments and was responsible for presenting shows at holiday times and in the spring.

“I would teach in boiler rooms, cafeterias and closets. For most of my career, funds were tight so I wrote my own band arrangements. One of the first I wrote was ‘Hello, Dolly’ for fifth graders. The parents loved it. After 27 years I moved to middle school. I had concert band and a jazz group. I loved to write original tunes, usually some kind of blues. I made each student feel special. Eventually, I retired after 32 years and was honored by my students at a final concert at the end of the year. I placed over 60 former students in the field as teachers, performers, and one musical therapist. I currently play often with the Danny White Band. Danny is a former student I started in the fourth grade. He now owns a local music studio and is one of the best performers on the Jersey Shore.”

Today Pashin is an in-demand trumpeter. “When I play any gig I find the benefits threefold: first, have fun. Second, learn something each time you play. And thirdly, win the respect of the audience and your peers as well as self-respect. Do your best and remember that you are part of the group. When you solo you make a statement or tell a story. It’s the best therapy in the world. When I feel the other cats in the band feeling me, I know I have connected and it pushes me to greater intensity levels. When I see and hear the audience respond I want to give more, even when I have to dig deeper. It is much like an athlete. If my rib cage is sore by the time I leave, then I know I ‘done good.'”

A trip to New Orleans, the birthplace of jazz, in late February 2013 changed Jerry’s life. He and his wife, Susan, and son, Dan, are planning to return soon to “get a more intimate feel for the city and its culture … My trip to NOLA was a spiritual and artistic trip to Mecca. It was a six-day trip that was life-changing. We arrived there on a rainy Monday night in late February. We checked into the hotel about 7 p.m. and by 8 p.m. we were at Café Maison, a club on Frenchmen Street. I was there to play in an invitation-only jam. When I arrived, I introduced myself to Gene, the jam master of the night. He said, ‘You must be The Legend from Jersey.’ I was called up after the local cats got up. I stayed on stage for the next three-and-a-half hours! What an experience!

“The next day we went to Congo Square and Louis Armstrong Park. I could swear I felt ghosts all around me. I played at the base of the Satchmo statue. It was very moving.” A visit to the Buddy Bolden Memorial at Holt Cemetery also moved Pashin. “I played, but it was difficult. I felt as if I were at the village of my ancestors. I felt Buddy’s presence.

“Later that day we stopped at Preservation Hall. I noticed a guy there with a slide trumpet. I asked the guard if I could talk to him. He let my family and me through the gate. I told the trumpeter of my meeting with Satchmo and he enjoyed it. I asked if I could play a tune with the band the next night. I returned the next night and found out the guy I had talked to had been injured by stepping into a pothole, so I talked to the [Preservation Hall] group’s sousaphonist, Ronell Johnson, who I now consider a great friend. A little later, they called me up. I asked the band, ‘How about some “Basin Street Blues”?’ It felt natural, almost rehearsed … my finest moment! I was given a standing invitation to play with them any time I’m in town. After that time in NOLA we were all changed. I realized how so many people live in a myopic world. I can’t wait to get back.”

Pashin was hooked into the Café Maison jam session by Cris Duque, who leads a “fine New Orleans funk band” named Soul Project. “Cris is originally a Jersey boy,” says Jerry. “After Katrina he and a couple of his band mates were stranded in New Jersey. We had a block party to raise several thousand dollars to help them get through. I always told him I’d get to his town someday. At the Café Negril Cris brought me up, telling the audience that I was from ‘E Street, New Jersey.’ The people loved it. Cris and his family are now part of The New Orleans Habitat Musicians’ Village.”

Conceived by Harry Connick Jr. and Branford Marsalis, the Musicians’ Village, according to its website, “provides a home for both the artists who have defined [New Orleans’] culture and the sounds that have shaped the musical vernacular of the world.”

Jerry met his wife, Susan, when they were both teachers in Matawan, N.J. “She is my best friend and the rock of my life. Sounds like a song in there!” The couple’s son, Daniel, is a chef who had worked in some of the finest restaurants in New York City. “Dan shares a love of music with me and has turned me on to some great players like Hendrix, Kermit Ruffins and others. I’m always proud of him.”

From where did the nickname “Legend” spring? Turns out that someone with the nickname “The Boss” is involved. “I went to a benefit show at the now defunct Tradewinds, a club on the Jersey Shore. Word had it that Bruce Springsteen would be making an appearance. Soon after I arrived, Danny White, who was performing that night, came up to me and confided in me that the Boss would be there. Five hours later, Bruce made his way to the stage. It was definitely worth the wait. After the show Danny said, ‘Follow me,’ and led me to a dimly lit back bar. There he was, Bruce Springsteen. I was introduced and I must say that Bruce was gracious and humble. He thanked me for coming to the show.

“The next day it occurred to me that if I could place one of my students on the stage with the Boss, that made me a legend as a teacher. I loved to watch pro wrestling and guys with a career span of one week were legends. Ha! So I could be a legend, too. That day I told my kids, tongue in cheek, ‘You may call me Legend.’ It caught on. They loved it. When I moved to the Jersey Shore and hit clubs, I introduced myself as Legend and it caught on. Ten years later some people don’t know my real name. It is a fun thing. I’m a survivor so maybe that is what qualifies me to be a legend. It is most definitely my nickname.”

For the past eight years Pashin has played with the band Holiday Express. “We play 50 to 60 events during the holiday season on a volunteer basis. We play at soup kitchens, children’s centers, cerebral palsy centers, etc. After Hurricane Katrina, we flew down to New Orleans and played a few shows there. Among them was a Naval Base in Gulfport, Miss.—specifically to Seabees. I was excited because my dad was a Seabee. We played to almost 2,000 sailors. The response was overwhelming. The sailors jumped on the bandstand to sing with us. I called out to our leader, Tim McLoone, to hit B flat and follow me. I went into ‘Anchors Aweigh.’ The building rumbled. Guys who could not dance were doing pushups in the aisles. After the show, as we were loading into the bus, I was called out. I was given a civilian medallion of appreciation. Wow!”

So if you’re on the Jersey Shore—or in New Orleans in the near future—keep an ear out for the Legend. “In the future I have one main goal: to get better all the time. I’m a firm believer in fundamentals and self-discipline in the arts as well as sports. It’s okay to break the rules, but master them first.”

Although he’s a retired educator, Jerry Pashin still has something to teach us all: “Music is not a destination; it is a journey. Along the way you can only hope you meet some good people and that you can somehow help each other. Nothing gives me more satisfaction than playing good jazz with good people.”

OK, that’s funny, but it also implies a problem. People who dismiss the accordion as soon as they hear it, as soon as it triggers … END_OF_DOCUMENT_TOKEN_TO_BE_REPLACED