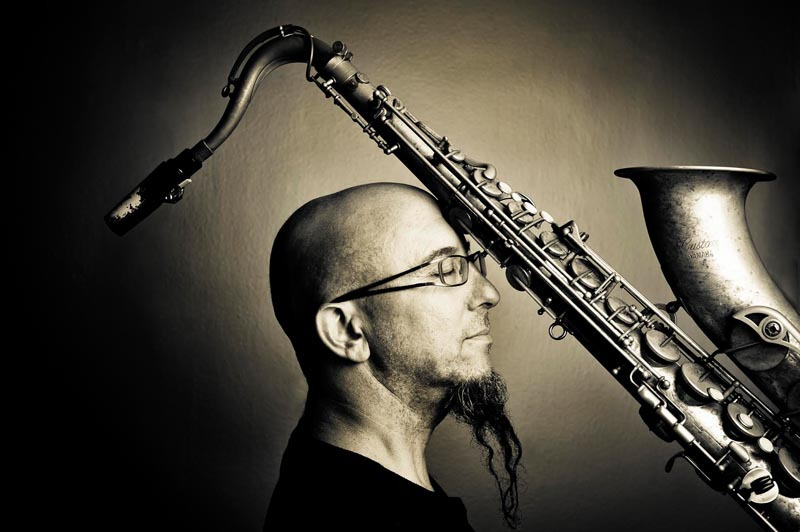 Jeff Coffin has played concerts in front of tens of thousands of fans with the Dave Matthews Band. But when he stepped onstage at the East Village club Drom in November, to celebrate the release of Side Up (Ear Up), his Mu’tet’s sixth studio album, the multireedist had a rare moment of performance anxiety. He sat down at the piano and proceeded to play an unaccompanied sonata.

“It’s scary every time I play,” admits Coffin, who is not a trained pianist. “I know that I’m going to mess something up, even though it’s very simple.”

The 49-year-old erstwhile reedman for Béla Fleck and the Flecktones composed the piece, “And So It Begins,” the opening track to Side Up, for two friends who got married at his Nashville home in 2013. The bride had been diagnosed with breast cancer two weeks before the wedding, but the couple went forward despite the uncertainty, and she is now cancer-free. “If the art is reflecting our lives, there will be mistakes. I always tell students, ‘Don’t even think about playing a perfect gig. Aspire to perfection; have an ideal. But you’re never going to reach it, and that’s OK,'” Coffin says in New York, munching on a pre-show snack of raw kale. “I come back to Roland Kirk. He says there are no wrong notes, only incorrect resolutions.”

In a more comfortable moment during the Drom show, Coffin took a cue from Kirk, effortlessly playing his tenor and alto saxophones simultaneously. “The word improvisation comes from a Latin root-improvises-meaning ‘unexpected’ or ‘surprise,’ and Kirk epitomized that,” says Coffin.

Adapting to the unexpected is the core mantra of the Mu’tet, which takes its name from the concept of mutation. For Coffin, all that remains constant is his goatee. “If you’re falling down the hill, how do we land on our feet? It’s going to be through listening,” Coffin says. “This band has some incredible listeners in it … able to get out of any jams we get into-no pun intended.”

Instead of playing the Drumitar, the guitar-shaped electronic drum machine Wooten invented, he opted for a modified acoustic kit. “I always wanted to get the bass drum on its side [slightly elevated, with the head facing skyward], because to me the most valuable real estate of the bass drum is out of reach,” Wooten says. “Futureman is known for doing electronic innovation, but when I get to the drums, you see me still heading to the future with that instrument.”

In creating Side Up, most of the mutations occurred at the harmonic level, with Coffin first composing the melody and form, then collaborating with the band on the conceptual and textural elements. “The way Chris and Felix hear is more vertical than I hear,” says Coffin. “So the way I’ve described it is that I have the bones and they put on the flesh.”

Coffin orchestrated one of the album’s most daring harmonic shifts on “Steppin’ Up,” based on the chord progression to “Giant Steps.” Underneath the stylistic recasting of an organ-driven New Orleans brass band, Coffin juxtaposes Coltrane’s dense changes with a modal bridge. The piece evolved from a master class Coffin gave at the Nashville Jazz Workshop on the notoriously difficult chopsbuster. “Everybody was frustrated and nobody sounded good. One girl was brought to tears,” Coffin recalls. “So I said, ‘Let’s do it like a funk tune. Let’s do it like a reggae tune. Let’s do it as a New Orleans second-line tune.'”

For Coffin, genre hybridization and odd time signatures stem from melody. “Mogador” incorporates tabla rhythms, while the funk tune “Scratch That Itch” employs pedal effects for what Coffin calls “electro-sax” and “space trumpet.” Rhythmically, the Latin groove “Low Hanging Fruit” is in 5, “The Scrambler” is mostly in 7 and “Yukemi” floats over nuanced polyrhythms.

Despite the complexity, however, Coffin strives for accessibility and lyricism. “When I read interviews with people like Trane and Ornette, they want to connect,” he says. “It’s not about trying to estrange anybody.” Coffin pays tribute to Albert Ayler on “Albert’s Blue Sky,” a gospel waltz that homes in on the avant-garde progenitor’s spiritual roots, as heard on the 1964 recordings that became the Black Lion release Goin’ Home. “I had heard about him being ferociously avant-garde. And I heard this record and thought, ‘This is some of the most beautiful music I’ve ever heard in my entire life. What are people talking about?'” says Coffin.

Still, Coffin can’t resist a challenge. “I’m just interested in what the saxophone can’t do,” he says. “I haven’t found anything yet. And I’m still looking.”

When you’re on TV, everybody knows you, or at least thinks they know you. Take Kevin Eubanks, who was on NBC’s Tonight Show five nights … END_OF_DOCUMENT_TOKEN_TO_BE_REPLACED

Jimmy Katz leads many lives. He is the preeminent currently active jazz photographer, and has shot more than 200 magazine covers and over 600 recording … END_OF_DOCUMENT_TOKEN_TO_BE_REPLACED

Take a look at Blue Note Records’ release schedule for 2022 and it’s hard to miss the significant percentage of electronic-oriented music. In March, the … END_OF_DOCUMENT_TOKEN_TO_BE_REPLACED