Bjørnstad, Mollestad and Brekken (from left) 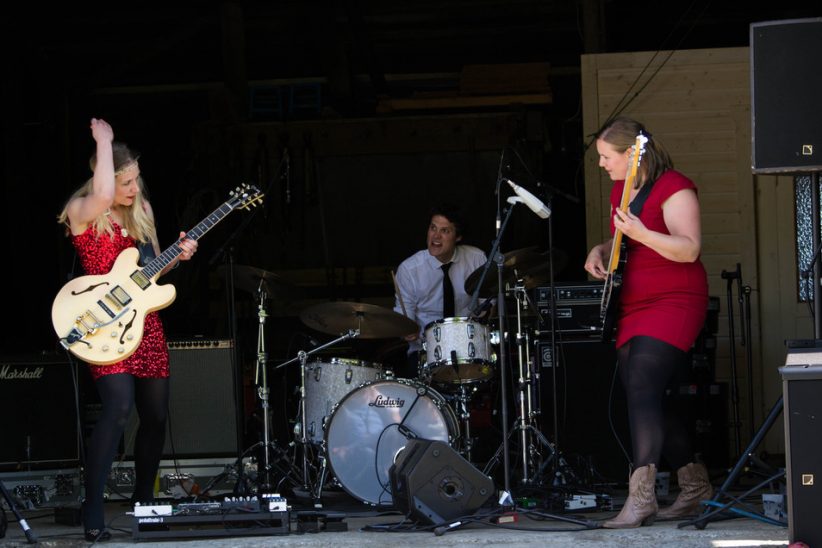 Predictions are for suckers, in music as in politics, but I’m prepared to say we probably won’t hear a heavier new track from a jazz combo this season than “In the Court of the Trolls.” The band in question is the Hedvig Mollestad Trio, from Norway, and the track appears on its fourth studio album, Black Stabat Mater (Rune Grammofon). With its convulsive snarl of chromatic riffs in 11/8 time, it’s a quaff drawn from the brackish well of prog-metal. But as the trio hurtles on, clearing room for an echoey, intrepid guitar solo, it also aligns with a jazz-rock axis. Hedvig Mollestad is the guitarist, in any case. She sounds like a holy terror.

That much hasn’t changed since Mollestad released her debut album, Shoot!, five years ago. Her trio, which has Ellen Brekken on bass and Ivar Loe Bjørnstad on drums, caught my ear then with its audacious style references: the loose swagger of early Black Sabbath; the density and prowl of peak Led Zeppelin; the expeditionary urge of Jimi Hendrix; the incantatory fervor of John McLaughlin. I didn’t find it a problem that all of these influences were fixed to a point in time: 1970, give or take a year. On the contrary, the specificity seemed a filter through which Mollestad could focus and project her ideas, which have more to do with the jazz-guitar tradition than might be immediately apparent.

In her interviews Mollestad, 34, bridges that gap without hesitation, citing the influence of Jim Hall, John Abercrombie, Pat Metheny and John Scofield, along with the acts mentioned above. She grew up with everyday exposure to jazz courtesy of her father, Lars Martin Thomassen, a well-regarded trumpeter on the Norwegian scene. Her mother, a teacher, played some guitar, and Mollestad gravitated to that instrument rather than the horn. She met both Brekken and Bjørnstad at the Norwegian Academy of Music, the elite conservatory in Oslo. They formed their trio in 2009, the same year Mollestad won the prestigious Jazz Talent Award at the Molde International Jazz Festival.

They found common ground in metal, a music with root currency in Norway, along with early psychedelic rock and fusion-all while stamping their rapport with the flexibility and inquiry native to jazz musicians. And while it shouldn’t be remarkable that Mollestad is a young woman shredding her way through an essentially macho-coded tradition, well, it assuredly still is remarkable, if maybe a bit less so in Scandinavia than in the States. Live reviews of Mollestad’s trio often include some passing but pointed nod to her appearance, as if underscoring an essential incongruity. Every now and again a writer notes that Brekken is a dynamo in her own right, leaving you to draw the conclusion: This is a take-no-prisoners, majority-female band.

So far I haven’t had the privilege of experiencing the Mollestad Trio in concert, which is one reason its other new release, Evil in Oslo (Rune Grammofon), serves such a vital function. Recorded at a pair of packed club gigs last year, it’s a double LP that cherry-picks highlights from the band’s first three albums. Side A features material from Shoot!-notably the enduring band anthem “Ashes,” which suggests a new spin on McLaughlin’s fiery work in the Tony Williams Lifetime.

As if to solidify that ancestral link, there’s also a live-wire version of “Laughing John,” from the band’s fine 2014 release, Enfant Terrible. Still, it’s not all McLaughlin all the time here. “The Valley” has a twang evocative of Bill Frisell, especially as Mollestad gets painterly with her pedal delay. The trudging, brutal riff of “Arigato, Bitch” more readily summons Tony Iommi, of Black Sabbath.

That’s the intended allusion on Black Stabat Mater, or at least part of it. As for the “Stabat Mater”-literally, “sorrowful mother”-it’s a Catholic hymn from the 13th century, concerning the anguish of Mary at the foot of the cross. That’s a theme ripe for the musical imagination, which helps explain why there have been so many notable treatments by composers ranging from Haydn to Dvořák to Arvo Pärt. The “Stabat Mater” has also been hijacked by bands working in the extreme subgenre of black metal, a fact that seems of obvious interest to Mollestad. The album opens with a workout called “Approaching,” hitched tight to a rhythmic overdrive, steroidal and furious. But the following track, “On Arrival,” works a far more abstract angle, wrangling feedback and noise to largely sculptural effect. It’s the most outwardly experimental performance by this trio on record, underscoring its spiritual affinities with metallurgic avant-weirdos like John Zorn, Raoul Björkenheim and Jamie Saft. A later track, “-40,” is a ghostly ballad that incorporates a toll of dissonant chords in tempo, with percussion limited to gongs and whooshing cymbals, like something out of the soundtrack to a noir-western.

These may be tantalizing glimpses of the path ahead for Mollestad and company: an itchier, more open-ended, less appropriative brand of badassery. The closing track, by Brekken, is called “Somebody Else Should Be on That Bus.” And while its core riff is nasty fun, and sets up some grade-A guitar squall, the tune feels like a cul-de-sac after the album’s other, more fully fleshed themes. Then again, “In the Court of the Trolls” isn’t a tune that goes anywhere in particular, other than straight for the jugular. Perhaps Mollestad has found a way to have her riffs and beat ’em, too. Or maybe she’s the troll presiding over this metaphorical court-playing to expectations, pushing some buttons, but refusing to fulfill anyone else’s idea of what is righteous.

When you’re on TV, everybody knows you, or at least thinks they know you. Take Kevin Eubanks, who was on NBC’s Tonight Show five nights … END_OF_DOCUMENT_TOKEN_TO_BE_REPLACED

Jimmy Katz leads many lives. He is the preeminent currently active jazz photographer, and has shot more than 200 magazine covers and over 600 recording … END_OF_DOCUMENT_TOKEN_TO_BE_REPLACED

Take a look at Blue Note Records’ release schedule for 2022 and it’s hard to miss the significant percentage of electronic-oriented music. In March, the … END_OF_DOCUMENT_TOKEN_TO_BE_REPLACED