Skip to content
Become a member and get exclusive access to articles, live sessions and more!
Start Your Free Trial
Home > Features > Jazz Educators Step Up to Face COVID-19’s Challenges

This year, JALC’s elite competition for high school bands, Essentially Ellington, turned 25, and for the first time in the festival’s history it declined to name a winner, instead celebrating the music and the top bands that participated. Todd Stoll, JALC’s vice president of education, said they had hoped to put on a live festival instead of going online. “Nothing really replaces mentorship in person,” he said. “And jazz is a communal art form. Just the concept of swinging is a group concept.”

Acceptance into the festival was based on recordings submitted by the bands in January, and in the absence of live performance, that wasn’t sufficient to identify which school had a superior band. In the past, schools that presented great recordings often didn’t place in the top three or four at the festival, Stoll said: “It’s like a snapshot in a moment versus the ongoing development of an ensemble, and Wynton [Marsalis] decided that this is not the year to do this.” There were also other considerations, like the equity issues that Whitaker raises. Wealthier school districts may have access to better recording and sound editing equipment, which would give them an advantage if recordings were solely used to judge their talent. “There’s all these things we try to equalize over the course of a year,” Stoll said. “We just decided to celebrate these kids who are in a situation of trauma and not choose one over the other.”

The education component of the festival was conducted online; daily workshops with each band were led by members of the Jazz at Lincoln Center Orchestra, who addressed performance issues that arose from reviewing the bands’ audition recordings. Another first was the addition of international bands to the event. This resulted in 18 finalist bands from the U.S. and five bands from (respectively) Cuba, Spain, Australia, Japan, and Scotland. “I think it was great for the kids to see other kids like them outside Tokyo playing Duke Ellington’s ‘Happy Go Lucky Local,’” Stoll said. “It gives them a feeling of community that’s much greater than I think they realize.”

In addition to the high-school competition, JALC’s Summer Jazz Academy also moved online. In past years, the event had drawn about 100 in-person participants; given the circumstances, Stoll and his staff anticipated that the online audience might reach 1,000. They were wrong. It grew to more than 8,000. The growth was driven in part by making course options more accessible to a larger swath of jazz enthusiasts. For example, courses were open to students starting at age 12, who could self-identify as anything from horn player to fan. About 20 percent were jazz lovers who just wanted to take a deep dive into the music. The rest were students between the ages of 12 and 21. Some classes were divided into beginner, intermediate, and advanced tracks; the jazz arranging class averaged between 1,500 and 2,000 students at a time.

Despite the success of these online efforts, Stall isn’t convinced that they’re the best option going forward. “Where was I going to teach 8,000 students about jazz at one time?” he said. “The drawback is you don’t know the depth of that interaction.” He sighed heavily. “This isn’t real. I’m not convinced this is going to sustain itself long-term because people yearn for that personal touch. There’s no substitute. Do you want to kiss your wife through the screen on your phone or do you want to kiss her in person?”

When Stanford University canceled on-campus summer events for 2020, it appeared that the 48-year run of the summer jazz workshop that began with Dizzy Gillespie and Stan Getz might come to an end. In normal times, the Stanford Jazz Workshop would coincide with the Stanford Jazz Festival; artists who played the festival in the evening would teach classes during the day. “The whole idea was to provide unfettered access to these great musicians,” said Ernie Rideout, the workshop’s marketing director. When the decision was made to take the workshop online this year even though the festival had been scrapped, the team was unsure about the outcome. “In the beginning we were petrified because we weren’t sure that we would be able to deliver an experience of similar quality,” Rideout said.

The 2020 camp ran for two weeks and attracted 400 students from as far as Europe, Japan, and Korea. Each student got a placement audition, so instructors knew what they were capable of and what needed improvement. They were placed in various music theory classes, musicianship class, and instrumental or vocal classes. This generated on average 150 Zoom events a day. The camp had 60 instructors, including saxophonist Joshua Redman (a frequent teacher there who also attended the camp in his youth), drummer Eric Harland, and pianist Taylor Eigsti.

Steven Lugerner is a graduate of the New School and plays saxophone and woodwinds. He first came to the Stanford Jazz Workshop as a high-school student, and became a camp counselor in college. Now, he’s camp director and manager of education programs. When the workshop went online, he wanted to maintain the morning gathering that set the tone for each day. He started showing archival video footage to introduce students to a wide range of jazz artists.

“I tried to curate historical black-and-white jazz performances,” he said. “The first week I showed [John] Coltrane playing ‘Afro Blue.’ It’s a 10-minute video, I played the whole thing. I didn’t intend for it to be such a heavy vibe, but that tune is heavy. People were into that. So I started every morning with a video that would spark the kids’ interest.” Lugerner was intentional about his choices; he wanted to expose students to Black artists, and women in general. Among the artists in the videos he shared were saxophonist Vi Redd, trombonist/composer Melba Liston, and one of Lugerner’s mentors, soprano saxophonist/composer Jane Ira Bloom, playing at Yale in the 1980s. “I wanted to make sure that all the kids watching that morning meeting saw themselves in that person,” he said.

To help the students improve their playing abilities and understanding of jazz, the faculty created nine different on-demand mini-courses that campers could log into and learn at their own pace. For example, drummer Cory Cox did a session on applying basic rudiments to different grooves. The drum patterns he played would switch every 60 seconds. “I was envisioning a Netflix for jazz education,” Lugerner said.

“I talk to people older than me and some of them are still hung up on ‘I like to move my student’s finger over the fingerboard on the bass,’ but we can’t do that anymore.” —Rodney Whitaker, Michigan State University

Rethinking the Studio (and the World)

In black-and-white photos documenting the recording dates for Miles Davis’ Kind of Blue, Davis, Coltrane, Cannonball Adderley, and Bill Evans are within arm’s reach of each other. In sync, listening, reacting, making music. This is how jazz has been produced since its creation. Now, driven by COVID-19 and the ever-expanding possibilities of the digital world, the New School in New York plans to adapt jazz recording to our current era.

According to the School for Jazz and Contemporary Music’s dean Keller Coker, the school is going to shift its focus away from live performance and expand its emphasis on recording as the basis for students’ work. Outlining the skills that he believes students will need to handle both the challenges and the current production trends in creating new music, Coker asked, “How do you take a jazz sextet and work together online to write original music and collaborate together and get that music recorded, and mix it and master it?”

Production classes will employ a cloud-based platform called Soundtrap, which enables multiple users to participate in a project. For example, a bassist can record a track that’s visible to everyone on the project; the drummer and other musicians can then add tracks until the recording becomes a fully formed piece of music. “Then the bass player may want to redo their part or the horn tracks,” Coker said. There are also online discussion rooms to go over musical details.

“It isn’t a way that jazz musicians generally work,” Coker acknowledged. “But it is a way that pop musicians and people composing for media such as film, TV, and video games do.” He added that digital production has been missing from the New School’s curriculum and that the school should have been emphasizing those skills before now because so many contemporary musicians use them—especially those who make money.

“I never want to make a hard sell to a student, but if there was ever a time to be in school, this is the time to be in school,” Coker concluded. “Students need training to be ready for the world in the way that it’s changed. And it’s likely that many of these changes are going to be permanent, or very long-term.”

Earl Newman wasn’t much of a jazz fan back in 1963 when he was hired to produce a poster promoting the Monterey Jazz Festival; the … END_OF_DOCUMENT_TOKEN_TO_BE_REPLACED

Jazz music really was a saving grace in my life,” says pianist, composer, and bandleader Helen Sung. She approaches the big statement with little ceremony, … END_OF_DOCUMENT_TOKEN_TO_BE_REPLACED

America’s most famous harpist is Harpo Marx: he of the curly mop of hair, sealed lips, and an overcoat full of props. When he sat … END_OF_DOCUMENT_TOKEN_TO_BE_REPLACED 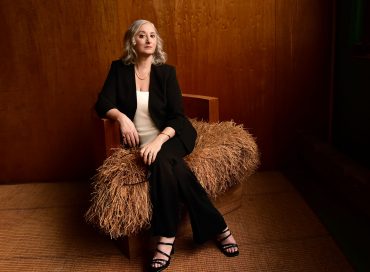 If you heed her peers and colleagues’ opinions, Renee Rosnes is the jazz equivalent of a “five-tool” baseball player: that rare athlete who possesses the … END_OF_DOCUMENT_TOKEN_TO_BE_REPLACED