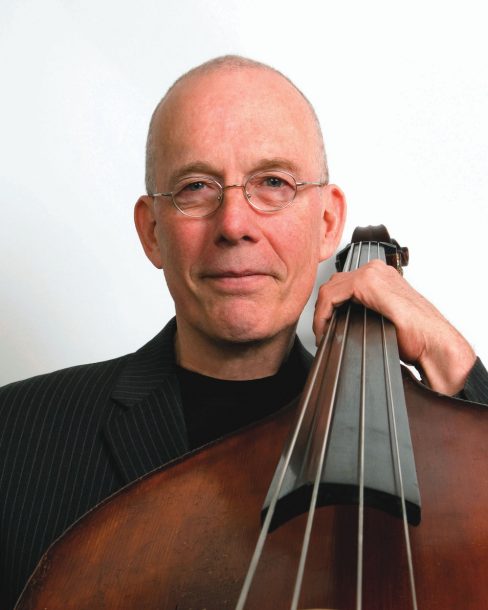 It was one for the books: 13 bass players lined up onstage in the showroom of the Holland America Line’s MS Oosterdam during the Jazz Cruise in October, to play an arrangement of “Sweet Georgia Brown” rechristened “Sweet Ray Brown” in honor of the departed bass giant. One of those 13 bassists was Jay Leonhart, for whom the moment had particular resonance.

“When I first heard the Oscar Peterson Trio with Ray and Herb Ellis, my future was decided,” says Leonhart. “I took up the bass violin seriously and never looked back.”

What drew Leonhart, who celebrated his 66th birthday in December, to Brown and the Trio was “the tremendous swing that band had. I had played with the Pier Five Dixieland Jazz Band in Baltimore, my hometown, and even played bass in rhythm sections behind Vic Dickenson and Ruby Braff, but my head was with the great, swinging jazz pianists like Oscar, Erroll Garner and early Nat ‘King’ Cole.”

Swing and/or rhythm have always been paramount in Leonhart’s music, just like the palpable joy in playing and performing that he easily conveys. Those qualities have made him a first-call bassist on the New York scene for decades; playing jazz, doing studio work and—a specialty he has honed over the years—accompanying singers.

But swing seems to have always been in his blood. He remembers dreading his classical piano studies as a youngster, but loving to play boogie-woogie rhythms on the piano and learning rhythmic, popular dance music by following the keys while playing piano rolls on a player piano at home.

“I took up banjo, guitar and mandolin and played duets with my older brother Bill on local Baltimore TV, but by the time I was 13 I wanted to concentrate on bass. I was playing behind trad-jazz and Dixieland musicians but didn’t know very much about jazz history. Then I met John Eaton, the pianist from Washington, D.C., and he was very helpful, filling in the gaps in my jazz knowledge.”

After some traveling with big bands and a couple short stints at music schools (including Berklee in Boston), at 21 Jay decided to hit the Big Apple. “But it was too early for me, living in sin city all by myself, even though it was easy to get cheap gigs and play in little bars. So I went back to Baltimore and took a job in my father’s insurance office for about five years,” he says. Leonhart also worked as a commercial pilot during that time in Baltimore.

In 1968, newly married to singer Donna Zier, he was ready to give New York City another go. “I learned to apply myself like a businessman working as a jazz musician, and soon I was meeting people who would hire me for little gigs, duos and trios. It was networking, although I didn’t think of it that way.” That led to work with Urbie Green, Buddy Rich, Mike Longo, Marian McPartland, the Thad Jones-Mel Lewis Orchestra and, in a notable duo that had a long, intermittent run at a small West Village club, guitarist Jim Hall.

But daughter Carolyn came along in 1971 and son Michael three years later, so Leonhart had a family to support and, more importantly, to keep together.

“I had offers to travel—Woody Herman was always calling me to join his band, and Les McCann wanted me to go on tour—but I kept turning them down. I just couldn’t do it. And I could earn more money in New York, with the session work and all, than I could playing jazz on the road. Especially since I could play electric bass too. I’d been playing it since I was a teenager, so I ended up backing pop singers as well. And when I did go on the road, it was with Tony Bennett, for really good money.”

It was in the 1970s in New York that Jay made an important friendship that would heighten his knowledge and appreciation of the jazz bass.

“Charles Mingus and I would meet almost every night and we talked about bass playing. Everybody said what a terror he was but to me he was the sweetest guy and he always encouraged me to play, try out new things. There was a definite similarity in rhythmic approach in what we were trying to do. He played more notes than me, but he also played very fine bass (rhythm) lines, which he wasn’t always given credit for. He could really kick a band.”

It’s telling that Leonhart would cite Mingus—best known as a bandleader, composer and virtuoso bass soloist—for his role in the rhythm section. For the rhythm section role is one Jay loves and thrives in. In recent years he’s held down the bass chair in trio recordings and/or performances by Roger Kellaway, Dick Hyman, Bill Charlap and Kenny Barron, as well as leading his own trio with pianists Ted Rosenthal or Benny Green, and guitarists Joe Cohn or Russell Malone. Not so coincidentally, the same trio instrumentation as the Oscar Peterson Trio that initially inspired him to undertake a life in jazz.

Leonhart continues to be a first-call bassist in New York, and with his children grown and working as musicians themselves—Carolyn is a singer and Michael blows trumpet, and both have toured as part of Steely Dan over the past decade—he’s able to take those small, cheap gigs in little bars and clubs again. “It’s good for your chops to play three or four hours a night in a duo or trio,” he says. And along the way, he’s been named—between 1975 and 1995—”The Most Valuable Bassist” in the recording industry three times by the National Association of Recording Arts and Sciences, the same folks who award the Grammys.

Sounds like quite a full jazz life, but that’s not the half of it. Or at least there is another half to it. Another aspect of Jay’s affection for rhythm has always been verbal. “I liked to find rhymes when I was a kid,” he says. “I wrote limericks, and later I wrote poems.”

When his kids were young and they watched Sesame Street, he started writing “Sesame-like songs,” but they were meaningful too. The poems/songs were autobiographical or observational, drawn from his experiences much like distillations from a diary or journal. “I started working things out on the piano, trying to understand how Steely Dan or Joni Mitchell or Dave Frishberg or Tom Lehrer wrote songs, so their influences came in,” says Leonhart.

By 1983, Leonhart had written enough songs to record an album, Salamander Pie (DMP), and by a stroke of luck, it was one of the first half-dozen jazz albums put out exclusively on CD. “For a short time, I was above Miles Davis on the Cash Box CD chart,” laughs Jay, “since audiophiles were collecting every CD that came out. And one magazine named my CD one of the two top ones of the year, along with one by Sting. Then everyone started putting out CDs and I assumed my rightful place.”

His songs have a wry comic edge. One of the best, “Me and Lenny,” is about a chance encounter on a plane with Leonard Bernstein and how a five-hour friendship, at least in Jay’s mind, is never again rekindled. It’s the kind of wistful moment that is close to universal in this era of chance encounters and fleeting relationships.

Leonhart has continued to write and record songs—and his songs have been recorded by many other singers, everyone from Audra McDonald and Karrin Allyson to Blossom Dearie and John Pizzarelli—and he’s also developed a one-man show, “The Bass Lesson,” where he appears singing and playing the bass. The pivotal song is “It’s Impossible to Sing and Play the Bass.”

For the last half-decade he’s also been collaborating with trombonist Wycliffe Gordon in a duo or trio (with pianist Eric Reed). The duo’s new CD, This Rhythm on My Mind (Bluesback), is now available. Both Gordon and Leonhart play and sing—”Jay has been pushing me to sing and write songs more,” says Wycliffe—with a little help from other musicians on only three of the 13 tracks, and some trombone and piano overdubbing on a couple of others. However, with both Jay and Wycliffe both scatting and singing, Jay often vocalizing along with his bass in the style pioneered by Slam Stewart and Major Holley, it is far from an austere duo recording. Originally Published April 1, 2007

At 95, Chicago-based guitarist George Freeman is among the world’s oldest active jazz musicians. Although he came of musical age in the 1940s and counts … END_OF_DOCUMENT_TOKEN_TO_BE_REPLACED

When you’re on TV, everybody knows you, or at least thinks they know you. Take Kevin Eubanks, who was on NBC’s Tonight Show five nights … END_OF_DOCUMENT_TOKEN_TO_BE_REPLACED

Jimmy Katz leads many lives. He is the preeminent currently active jazz photographer, and has shot more than 200 magazine covers and over 600 recording … END_OF_DOCUMENT_TOKEN_TO_BE_REPLACED