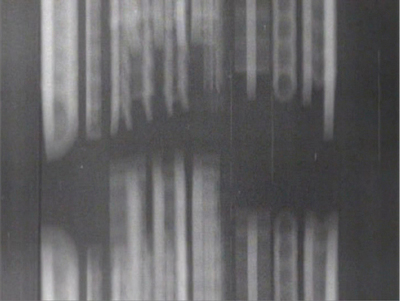 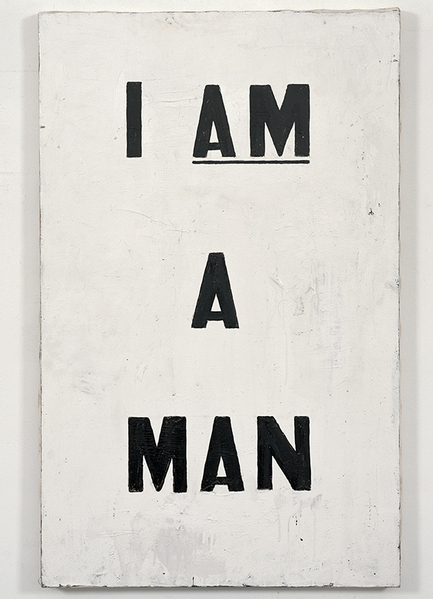 Jazz artist Jason Moran says he spends some serious time taking in visual art at New York’s museums. This Wednesday, March 23, at 8 pm, he’ll be at the Whitney, but not just to cruise the galleries. Moran will be improvising a variation on the score he composed for The Death of Tom, a short video work created by visual artist Glenn Ligon, many of whose paintings, prints, drawings, and sculptural installations make up “Glenn Ligon: America,” retrospective exhibition showing at the museum through June 5.

Moran’s performance will accompany a showing of this additional Ligon work, in the tradition of silent film screenings. In fact, The Death of Tom began as recreation of the final scene of Thomas Edison’s 1903 silent film Uncle Tom’s Cabin directed by Edwin S. Porter. Ligon, whose work often makes use of literature and popular culture, portrayed Tom. The nature of the piece changed when the artist discovered that, due to a developing error, some key footage was playing back as blurry abstract shapes and patterns. No stranger to experimentation with abstract forms, Ligon decided this version could prove evocative in its own right, particularly with the right kind of score. Ligon and Moran will discuss the project immediately following Wednesday’s performance, in a conversation moderated by pianist and public radio host, Terrence McKnight.

Reached by email, Moran answered some questions in advance.

What initially drew you to this project? Were you already an appreciator of Mr. Ligon’s work?

I have known Glenn’s work since the mid-90s and was fortunate enough to meet him in 2006. We have always talked about a variety of things including Thelonious Monk. He titled a show at an art gallery in London BRILLIANT CORNERS, and I knew that I must talk to Glenn about Monk. We talked, and it was also during the time I began working on my Monk tribute, IN MY MIND: Monk at Town Hall 1959. So, he made a painting for IN MY MIND, which we projected onto a screen behind the band. My repayment to him was for his first foray into film.

He told me about his commission to make a film for the Toronto Film Festival. He decided on the subject of Thomas Edison’s film version of Uncle Tom’s Cabin, particularly Uncle Tom’s death scene. Glenn told me about the process and how he would like me to add a score to it. We also had been talking about the song NOBODY by the minstrel singer Bert Williams, and how this song might be a point of departure musically. I was all in, as I had begun playing NOBODY with The Bandwagon because Glenn hipped me to it a year before this conversation. I’ve long been a fan of Glenn’s conceptual nature, and how he pulls emotions out of words. It’s black magical.

It sounds like the film is some somewhat imagistically abstract. What sorts of resonances does it have for you?

When Glenn sent the footage, there were going to be three screens of images. And one of his screens is the failed footage (footage shot with an old camera that was not developed properly), which is the abstract screen. The other two screens were to show video of the process of Glenn, kind of a behind the scenes. So, I could see the action in the Death of Tom scene clearly, all of the action, the entrances, exits, etc. Once I understood the action, I then decided to record the music by only looking at the failed footage, footage that looks more like shadows. I played to the shadows, each time focusing on small aspects of the song NOBODY. Once I sent Glenn the score, he decided to do away with the documentary footage and only show the failed footage, which I thought was a stroke of brilliance.

The film really parallels his painting process as well: the repetition, the abstraction, the weight, the font, the spacing. Personally, this is the kind of work that I love doing: the digging in the crates, the reassessment of culture, particularly African-American culture, the sonic aesthetics of social atmospheres, etc.

You’ll be improvising a new accompaniment to a film you’ve already scored. Will you be drawing from a framework, or vocabulary you’ve developed for the project, or will you try to approach this project fresh?

I’ll be improvising, but also playing from the score that I originally attached to Death of Tom. The film is about 20 minutes, so I think after a while, a new path might unfold for the piece, and I’ll most likely test something new under the film.

How does performing at an art museum differ from performing in other venues?

Well, I love performing in museums because it is like my second home. I spend as much time in museums as I do in jazz clubs. When I’m home, I’m going to see friends and their works in galleries, or museums, or in performances on the street, etc. And have over the years been spending as much time with visual artists as I have with musicians. What I like about museums is that the visitor to a museum is not necessarily looking for “entertainment” per se. There is an intention as they walk through the door, an intention that is to be challenged by the work, or to be confirmed by the work. So, if someone comes to a museum to hear music, there’s real intention there. People often stumble into a jazz club, looking for something to do any late evening of the year. But you just don’t stumble into a museum and say, “where is the jazz show?”. So, I think the audience that listens to music in a museum listens with a sense of focus, and I can feel that from my vantage point.

When you’re on TV, everybody knows you, or at least thinks they know you. Take Kevin Eubanks, who was on NBC’s Tonight Show five nights … END_OF_DOCUMENT_TOKEN_TO_BE_REPLACED

Jimmy Katz leads many lives. He is the preeminent currently active jazz photographer, and has shot more than 200 magazine covers and over 600 recording … END_OF_DOCUMENT_TOKEN_TO_BE_REPLACED

Take a look at Blue Note Records’ release schedule for 2022 and it’s hard to miss the significant percentage of electronic-oriented music. In March, the … END_OF_DOCUMENT_TOKEN_TO_BE_REPLACED