Skip to content
Become a member and get exclusive access to articles, live sessions and more!
Start Your Free Trial
Home > Features > Jamison Ross: Give the Singer Some 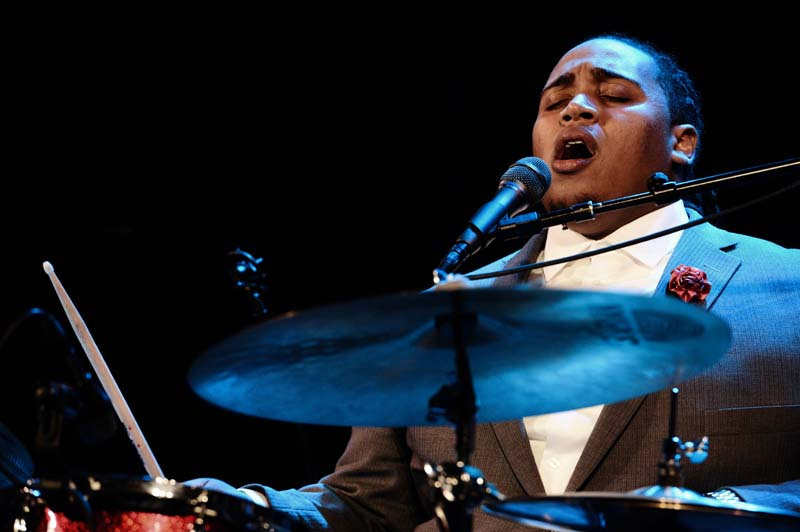 There’s a moment on Jamison, the Concord Jazz label debut from drummer Jamison Ross, where a series of soft, stop-and-start drum rolls ebb and flow to anchor his warm tenor’s wordless, almost devotional vocal melody. Together, his drums and voice create motifs that linger into the next number. In a way, these two tracks represent the heart of the album.

“Jazz [Aubrielle Ross] Interlude” was written for Ross’ daughter. She was born shortly before he cut the album-his first recorded foray into playing drums and singing simultaneously-and he sees a parallel between what she represents and what it means to combine two previously separate artistic sides of himself. In both cases, he says, “I’m bringing two worlds together.”

“Having a child … changed the relationship between me and my wife. It also heightened our love for each other. At the same time, we had a third person that was in that love,” says Ross, 27. He’s seated in a quiet restaurant in his adopted hometown of New Orleans, nursing a tall glass of ice water. Braids cascade over his large frame as he speaks, openly and without hesitation, occasionally fluttering his hands to drive home a point. “The concept of Jamison is me bringing this rhythmic nature as a drummer together with this vocal nature,” he says. “But also in my life I’m bringing together so much at this point in time-and-creating who I am as an artist.”

An in-demand musician who’s toured extensively with vocalist Carmen Lundy and keyboardist Jon Batiste, Ross has long defined himself as a drummer, both professionally and in school. But he grew up singing in his grandfather’s church in a predominantly African-American section of Jacksonville, Fla., and that part of him remains imprinted on his musical DNA.

In 2012, Ross won the Thelonious Monk International Jazz Drums Competition, earning a new level of recognition and a recording contract with Concord. For his first album as a leader, he figured he’d sing on a couple of tracks since he’s always approached music from a melodic standpoint, writing the melody of a song first and letting it develop from there. Beyond that, he planned to make the drum record he knew Concord expected. “But I was like, man, that’s not really what sums me up as a musician,” he says. Ross discussed his concern with the label and, after agreeing to start with a demo showcasing his vocals, got a green light to proceed as he wished. “Next thing you know,” he says, “we recorded at Esplanade Studios and there it was: I sang on 10 of the 12 tracks.”

Those tracks range from standards like a soulful take on “My One and Only Love” to a slowed-down, opened-up version of “Bye, Bye, Blues,” which he says emphasizes the song’s “Ray Charles come-home-baby-like storyline.” Ross wrote originals like the inward-looking “Emotions” with his usual focus on melody and a determination that each song should in some way “get to the blues,” a lesson he learned while studying under pianist Marcus Roberts at Florida State University’s jazz program. “Unlike many drummers, Jamison understands music beyond the role of the drums,” Roberts wrote. “He can see the whole musical picture and use that knowledge to create very imaginative drum parts.”

Growing up in Jacksonville, Ross’ first instrument was the organ, after which he picked up a variety of others while continuing to sing. “[The musicians] controlled the atmosphere there. We embodied the spirit and the mood,” he recalls. “That spirit of where I grew up is how I hear music today. I hear it not in the form of notes and tones [but] in the form of emotions and power and a certain type of conviction, a certain message.”

While studying jazz drums in creative and performing-arts program, Ross appeared in Chops, the 2007 documentary about his high school band’s appearance in the Essentially Ellington Festival. After graduation, he declined an offer to attend Berklee in favor of FSU’s jazz program, where he forged lasting relationships with musicians like guitarist Rick Lollar and pianist Chris Pattishall, both of whom appear on Jamison.

In describing the dynamic of the band that appears on the album, both Lollar and Pattishall emphasize the importance of their shared experience in the small but intense FSU program. “The record is the culmination of a lot of years on bandstands and practice stands together,” Lollar says.

“That band has a unique sense of camaraderie and fellowship,” adds Pattishall.

The influence of Lundy, who gave Ross his first break as a touring jazz musician, is audible too, though in a higher-level way. “She’s taught me that it means more to do what you love, so that at the end of the day what you’ve done can speak for itself,” he says. “You may be dead and gone one day, but people can look back … and understand a mythology of who you were.” As for Ross’ mythology, it’s still being written. “This album is the beginning,” he says.

At 95, Chicago-based guitarist George Freeman is among the world’s oldest active jazz musicians. Although he came of musical age in the 1940s and counts … END_OF_DOCUMENT_TOKEN_TO_BE_REPLACED

When you’re on TV, everybody knows you, or at least thinks they know you. Take Kevin Eubanks, who was on NBC’s Tonight Show five nights … END_OF_DOCUMENT_TOKEN_TO_BE_REPLACED

Jimmy Katz leads many lives. He is the preeminent currently active jazz photographer, and has shot more than 200 magazine covers and over 600 recording … END_OF_DOCUMENT_TOKEN_TO_BE_REPLACED