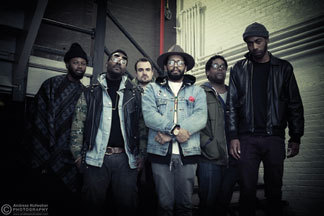 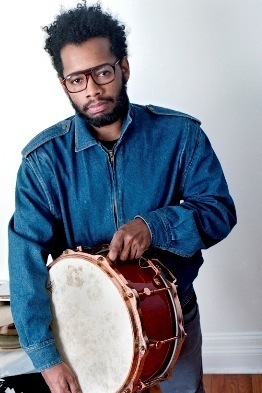 Jamire Williams, the rare drummer on the jazz scene these days who’s heavily invested in leading his own band, says that he plays “social music.” This makes sense-every band is a social unit, and he’s clearly concerned with societal problems. But the 28-year-old’s group, ERIMAJ, goes in the opposite direction: It’s antisocial music, or at least reticent. This puts it on relatively untrodden terrain in contemporary jazz, and gives it the bite of something fresh.

If you’ve heard much of Frank Ocean, the laconically ruminative singer who’s trying to teach R&B fans how to see deeper into their own hearts by staring at their shoes, then you’re already on your way toward figuring out what ERIMAJ is all about. The band’s recently released debut album, Conflict of a Man (Don’t Cry), which features yearning vocals from Chris Turner on most tracks, scans like a diary full of regretful sentences that never find their way to completion. More than anything, you hear the sound of someone scraping for meaning in a world where digitization and corporatization leap forward unbounded. What suffers in this environment, among much else, is the wellspring of spirit that ought to feed art.

“For me, it’s definitely a spiritual thing, the battle between being true to yourself and artists just conforming to the mainstream,” says Williams, a Houston native who moved to New York City in 2002 and has since worked in bands led by Jacky Terrasson, Dr. Lonnie Smith, David Weiss, Robert Glasper and Christian Scott. “A lot of stuff in our generation is just corrupt, man. … That’s the conflict. ‘Choosing Sides,’ the last song on the album, is the apex of it: What are you going to do? Are you going to choose to keep being creative or are you just going to conform to what the masses want you to do?” With that much dogma behind it, Conflict of a Man might reek of gravitas; you can imagine it declaring, loud and strident, “I am pure.” But with ERIMAJ, you get a man who’s earnestly questioning his own ability to stand up when forces outweigh him. He’s also losing confidence in the people surrounding him.

Good thing, then, that Williams has put together an ensemble that inspires trust. ERIMAJ is a loose collective, and Williams builds different assemblies for different gigs. On the album, the core group includes Williams on drums, Turner on vocals, Corey King on trombone, Jason Moran on piano and keyboards, Matthew Stevens on guitar and Vicente Archer on bass. Conflict of a Man‘s opening tune, “Unrest (Journey to the Land of Milk & Honey),” starts with a grave and almost lieder-like Rhodes passage from Moran-soft tones with heavy burdens-and you find yourself paying attention to each note as it lands. (The opening strain sounds unmistakably like the beginning of “Everything in Its Right Place,” which kicks off Radiohead’s seminal Kid A. It makes you realize that all the clearest points of reference for ERIMAJ-Radiohead in the 1990s; J Dilla; Jack DeJohnette’s records in the ’60s and ’70s-were themselves trailblazers.)

As “Unrest” unravels, Williams and Stevens and Archer, all on acoustic instruments, wander into the picture. Over the course of three and a half quick minutes, they build a quivery rubato landscape. Nothing else on Conflict of a Man is quite as mercurial, but the eeriness and doubt that “Unrest” establishes never leave over the course of the record’s 50 minutes, even when Williams wields punchy beats that could hold their own on a Maxwell record.

Both on record and live-two very different things for ERIMAJ-the group’s cohesiveness and distinctiveness are enough to make Williams arguably the most promising drummer-bandleader to emerge since Brian Blade. He notes that for most drummers, bandleading is “kind of like an afterthought. … People are just putting out records to put them out.” He adds, “I’ve always had a strategy and a goal that I wanted to get to.”

Performing at the Charlie Parker Jazz Festival in Harlem in August, just a few days after the release of Conflict of a Man, Williams assembled a four-piece iteration of ERIMAJ, without Turner. Moran wasn’t playing, either, but he’d come to the festival as a spectator, so he sat in on a reworking of Fats Waller’s “Ain’t Misbehavin’.” He played a piquant solo, and afterward the band held the residue on its tongue; all eyes turned to Stevens, but he didn’t go in for a solo. Instead, he dug deep for a few wobbling tones in the low register and let the whole band keep stirring. After about two minutes of this the tune ended, still cathartic and unresolved.

At another point in the set, Williams called “This Night, This Song,” Tony Williams’ spectral tale of unrequited love in 11. It seemed like a bold move, considering it’s among Conflict‘s most vocals-dominated tunes. Unconcerned, Williams pulled his vocal mic up close and sang the whole thing as he played, in a high tenor not unlike Tony Williams’ candid singing on the 1971 recording. He wasn’t always on key, but he was clearly happy to be holding the spotlight in unmistakable terms. This was the drummer’s band; no matter who’d written them or who sang on the record, or how much conflict was wrapped up inside them, those words were coming from him.

“The Detroit Way,” according to author Bill Harris, who’s written extensively about jazz, is a tradition of schooling rising Detroit jazz musicians on the rudiments … END_OF_DOCUMENT_TOKEN_TO_BE_REPLACED

Tenor saxophonist Julieta Eugenio was recently reminded of the distinct pleasure one can derive from masters of her chosen instrument. While cooking at home and … END_OF_DOCUMENT_TOKEN_TO_BE_REPLACED

Everything about Israeli-born tenor and soprano saxophonist Eli Degibri is a celebration. You can hear that in his sideman gigs with Herbie Hancock and Al … END_OF_DOCUMENT_TOKEN_TO_BE_REPLACED

It’s a cold March Friday night in New York City, but the crowd inside the Village Vanguard crackles with warmth as it engages with the … END_OF_DOCUMENT_TOKEN_TO_BE_REPLACED