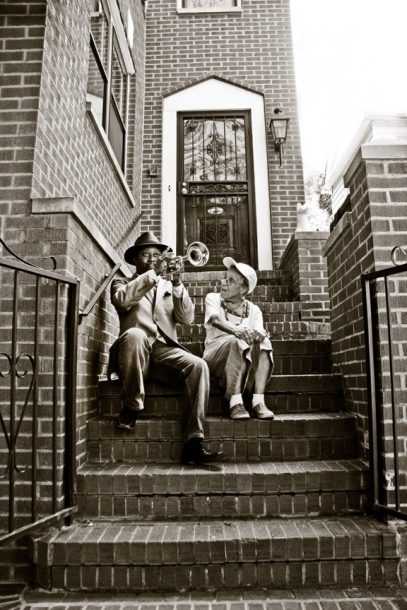 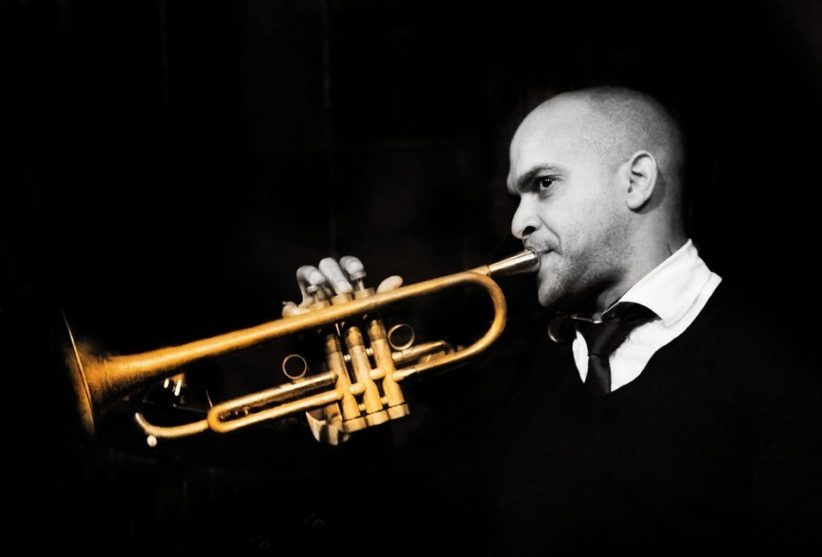 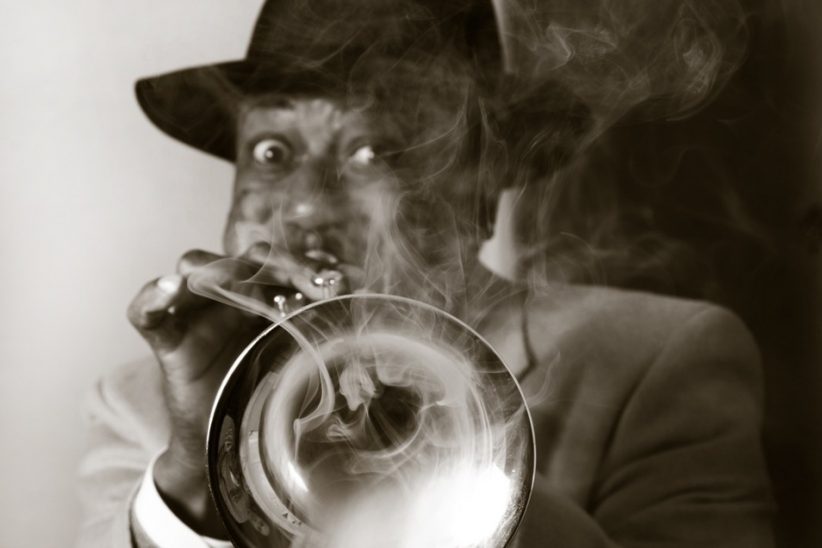 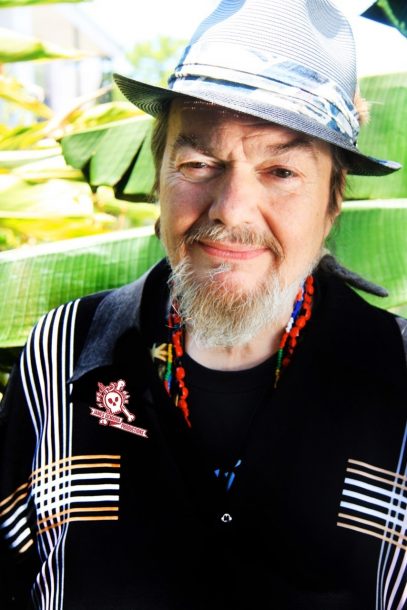 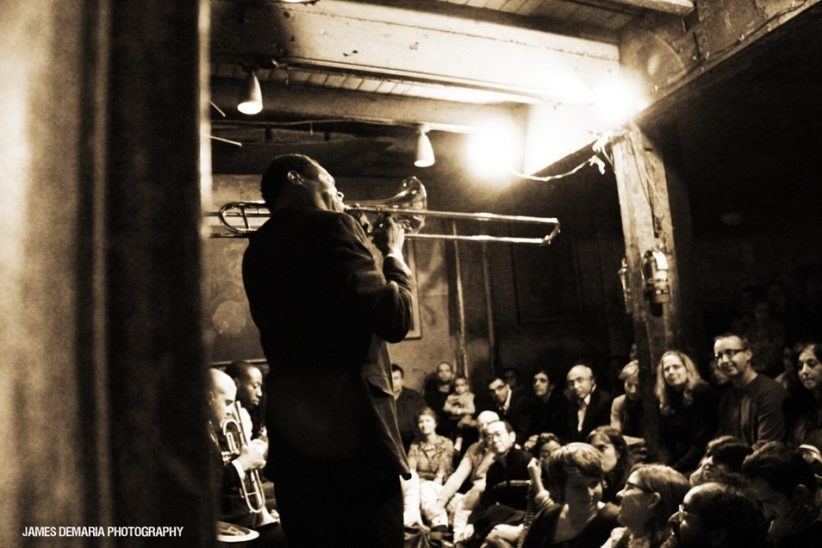 This writer has had the pleasure to watch the director’s cut of James Demaria’s new film Trad. If you possess love in your soul for the music of New Orleans, you will find this film to be a poignant, passionate, and extremely powerful glimpse into the city, its music and its musicians. And if New Orleans has tragically never been on your radar, after viewing Trad it will be.

Filled with interviews with musicians such as Kidd Jordan, Irvin Mayfield, Dr. John, Carl Leblanc, members of the fabled Boutte clan and the gifted saxophonist (and the film’s co-producer) Calvin Johnson Jr., Trad is a loving, honest look at what it means to play music in New Orleans. Its many live shots, including one in Preservation Hall, are absolutely thrilling.

“I’ve had an obsession with New Orleans since the ’90s,” says Demaria. “I have lived there twice and watched it evolve. Change is good, but forgetting the people and customs that came before us is the American way to do things—and it’s tragic. New Orleans is alive. Its music personifies the city and its wonderful people. I want to remind people that they don’t need to live somewhere and take over. Sometimes it’s better to just blend in and appreciate the magic around you. In Trad, music is the magic.”

How did Demaria choose the artists who appear in Trad? “The people that I chose to be in the film (and work on the film) are the perfect representation of what’s special about New Orleans music,” he says. “Calvin Johnson represents the lineage and hope for the future. Kermit Ruffins is the cool cat factor. Dr. John is the hoodoo man reminding you that what comes around goes around. Moreover, people like Kidd Jordan, Irvin Mayfield, Carl Leblanc and the Boutte clan are the real faces of the city: humble and eccentric geniuses.”

Calvin Johnson Jr. (whose superlative album Native Son [CD Baby] has found a new home in this writer’s CD player) comes across as wise and insightful as he is young. “Calvin also happens to be one of my best friends,” says Demaria, “and a seriously talented and caring person. He’s all about his family and his city. We’ve been through it all over the past two years while working on this project, and I don’t think we’ve ever had an argument. Calvin is passionate and a real professional, and that’s why he’s the co-producer of this film.”

In addition to being a filmmaker, Demaria is also a gifted photographer. “I was a photographer for 20 years, so many of my heroes lie in that realm: Irving Penn, Richard Avedon and Helmut Newton, to name a few. They taught a suburban kid an art form he could connect with. My other heroes have always been musicians, but I don’t have a smidgen of musical talent. However, I do know what I like, and that ranges from Louis Armstrong to the Sex Pistols.”

How about movie directors? “I love anyone who portrays New York City in the ’70s and ’80s—especially Martin Scorsese and his peers. I like seeing New York City when it still had a soul, before the Times Square of my youth became sanitized and lower Manhattan devoid of character. Also, cable series such as The Sopranos and The Wire are so good these days (that) people like David Chase and David Simon rank high on my list, too.”

Like many a lucky lad, Demaria had a father who dug the big bands. “My dad loved big band and swing music. I loved the Glenn Miller types, but when I heard Louis Prima I was hypnotized. His energy was insane—kind of like my Italian dad. These guys are lovable and kooky with a frenetic energy that never burns out.

“And then there was Pops. Oddly enough, I fell in love with [Louis Armstrong]’s voice first and horn second. In my later years, I’ve put him up on a pedestal with guys like Bob Marley as musical prophets whom I turn to in times of need. My wife is into Coltrane and [Miles] Davis, but I’m strictly a New Orleans jazz guy. That’s where my love of the place started, and that’s where it still lives. Being at a place like Preservation Hall and seeing the band start to burn it up is like watching a machine crank its gears until the whole engine is roaring with wild abandon. Magic.”

How did he become a filmmaker? Says Demaria, “Being a filmmaker is something that I always wanted to get into. Initially, I was interested in being a director of photography. But then I realized that I’m really bossy, and people tend to listen to me, so I set my guns on the director position. My first film, Treme Life, gave me some street cred. The second, The Key to Me, got my work on television. I’m hoping the third [Trad] will make an impact on some of the people who seem to think it’s OK to forget the past. Not everything needs to be changed. Learn it. Love it. Hell, form a band and have some fun. But don’t show up from the Midwest and tell native New Orleanians what they should do to make their city and their art better; them’s fighting words.”

What are the greatest challenges facing a 21st-century filmmaker? “My only challenges in being a filmmaker are finding money and finding people who care like I do,” he says. “A good friend gave me some advice once: As a filmmaker, it’s your job to make people give a shit about what you care about. They never will to the extent you do, but if they are the money people they will respect your integrity and help you get your work done. And don’t be ashamed to annoy people—which I do really well.”

Demaria’s right-hand man over the past five years is a lanky dude named Trevor Ayer. “Trev is a film and music fanatic, and while certain people have abandoned me and my efforts over the years—because it’s more about soul than money—Trev has stuck right by my side. He would take a bullet for me—yes, he would—and the feeling’s mutual. Trev has a fantastic eye and always gets the shot, even when there’s no money to pay him. Just give the man some McDs and a blanket and he’s up for anything, especially when he believes in the cause. I will always be in his debt.”

Much is afoot in this filmmaker’s life: “The future plans for James Demaria Productions are currently underway. There is a nonprofit in New Orleans called Trumpets Not Guns. Its founder is a wonderful couple named Lisa and John Grillot. They have like a hundred kids and 20 dogs and are scratching away at different businesses to make it all work. Yet, they care enough to make sure a kid in the bad part of town who needs an instrument for a school performance gets what he or she needs.

“We are working on a project with Northwest Catholic High School in Connecticut to bring 40 kids and a whole wagonload of musical instruments down to the Crescent City. Some of the instruments will go to an after-school program at the Ellis Marsalis Center, whereas others are going to the Craig Charter School in the historic Treme neighborhood. We’re trying to take Trumpets Not Guns to the next level and bring some goodies to other cities such as Detroit, which has its own claims on musical history and could also use a helping hand. And some magic…” Originally Published March 9, 2015

In its near-century of excellence, The New Yorker has been home to more than its share of tops-in-their-field contributors. There’s E.B. White, with his luminous … END_OF_DOCUMENT_TOKEN_TO_BE_REPLACED

Put a “the” in front of a name and it acquires historical heft. The Thelonious Monk who entered New York City’s WOR Studios as Halloween … END_OF_DOCUMENT_TOKEN_TO_BE_REPLACED

On the enchanted evening of August 16, 1958, Ella Fitzgerald took to the stage of the legendary Hollywood Bowl. There, with a lustrous orchestra conducted … END_OF_DOCUMENT_TOKEN_TO_BE_REPLACED

Be careful what you wish for.  By the beginning of 2020 guitarist Mary Halvorson, one of the most acclaimed musicians of her generation, was also … END_OF_DOCUMENT_TOKEN_TO_BE_REPLACED