Skip to content
Become a member and get exclusive access to articles, live sessions and more!
Start Your Free Trial
Home > Features > Jack Sheldon: Keeping His Chops Up 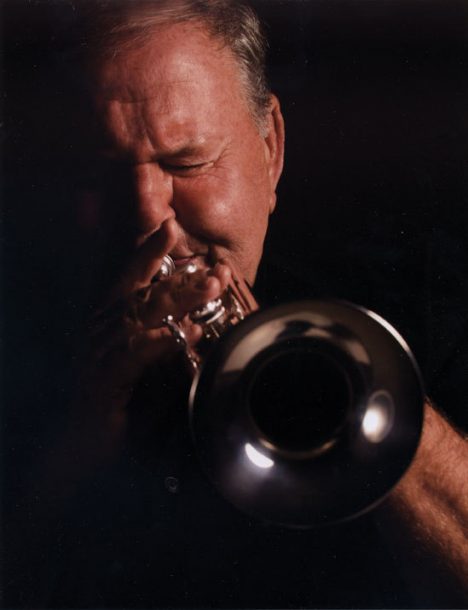 Three days before his 79th birthday on Nov. 30, 2010, Jack Sheldon was his usual sardonic, wickedly whimsical self. Seated amid his Jack Sheldon Orchestra, a round mound of melody and rhythm surrounded by some of Los Angeles’ finest players, he was doing what he’s done for the past five decades: keeping the jazz flame burning bright with his articulate bebop trumpet playing and between-tunes gag lines. “They sang ‘Happy Birthday,'” Sheldon says a couple days after that Catalina Bar & Grill performance. “But they didn’t give me a birthday cake.” Then, allowing a couple of beats to pass for perfect timing, he adds, “But I’m so fat, I don’t need any cake.”

A comparison of his current image with photos of the slender, striking Sheldon of the ’50s argues in favor of the trumpeter’s assessment: He has indeed increased his avoirdupois over the decades. But his trumpet playing is as trim and appealing as it was when he was a boon companion of such West Coast icons as Art Pepper, Chet Baker and Gerry Mulligan.

Sheldon claims he’s on track to do something about the weight. “I swim a lot,” he says, “but I’m still not too svelte—right now. But I’m planning to go into training in January. I’ll work with weights and running and swimming. That’s about it. I’m too fat. I haven’t been warned about my weight by a doctor, not yet.”

Then comes the punchline: “People on the street just come up and warn me about it.”

Although Sheldon was born in Jacksonville, Fla., he’s been a dedicated Los Angeleno since he was 15. “I liked the West Coast from the very beginning,” he says. “The weather and everything else are just right for me.” His mother, Jen Loven, taught showbiz greats how to swim at her Jen Loven Swim School in Hollywood. Sheldon, as a result, has been a dedicated swimmer for most of his life. And his daughter Jesse is following in her grandmother’s wake, he says, “teaching all the movie stars and their kids.”

The 1950s in Los Angeles were Sheldon’s 20s, and, influenced by the sound, spirit and humor of Dizzy Gillespie, he quickly became one of the primary figures in the West Coast jazz of the period. “There actually weren’t so many of us, at the time,” he recalls. “Now there are a million jazz guys out here, and they all play great. But what we were doing back then, back in the ’50s—that was different. We knew we were doing something special.”

Surviving as a jazz musician, however, required more than local gigs at places like Gene Norman’s Crescendo and the occasional recording session. In the late ’50s Sheldon toured extensively with some of jazz’s greatest big bands. “We’d go from the West Coast to the East Coast, depending on who we were playing with,” he remembers. “Benny Goodman, Stan Kenton. One time, when I was with Goodman, we played opposite Count Basie at Basin Street East. And once he sat in with the Goodman band. That was something. There’s nobody like Basie.

“I loved working with Kenton,” he continues. “Usually I just played with him off and on. But once, in one continuous stretch, I played with him four months steady, every night. The playing part of it was fine—there were five trumpets, and I didn’t have anything demanding to play, not really. I mostly just did the solos. But four months on the road? Man, that was enough of the road for me. And I loved getting back to California.”

Unlike many other California jazz artists, being based in Los Angeles rather than New York wasn’t a detriment to Sheldon’s career. To the contrary, his highly visible presence around L.A. earned him an endless list of high-profile credits as well as film- and TV-related work—off- and onscreen. It’s his lyrical trumpet that is heard playing Johnny Mandel’s “The Shadow of Your Smile” in the 1965 film The Sandpiper. His section playing can be heard in the themes for Peter Gunn and The Munsters, among many other shows. And Sheldon is fond of his playing on the soundtrack for the 1991 romantic comedy The Object of Beauty, just one more of his myriad film-score appearances. His purely musical collaborations encompass such stellar names as Gillespie, Dexter Gordon, Curtis Counce, Shelly Manne, Frank Sinatra, Mel Tormé, Tony Bennett, Peggy Lee, Zoot Sims, Henry Mancini, Marty Paich, Tom Waits and dozens of others.

Over the years, Sheldon’s quick-witted onstage commentary—often tinged with the risqué double-entendres that became part of his repertoire during a long run of Playboy Club appearances—became a fundamental aspect of his performances. Hanging out with such edgy, jazz-influenced comics as Lenny Bruce and Mort Sahl further enhanced his already adept comedic skills, fostering Sheldon’s careers as musician, funnyman and actor. His long résumé of film and television appearances includes co-starring roles in the sitcoms The Cara Williams Show (1964-65) and The Girl With Something Extra (1973-74), as well as the starring role in his own sitcom, Run, Buddy, Run, from 1966-67. Fans of Dragnet‘s late-’60s run might also recall the trumpeter. “Jack Webb used to come into a club where I was working,” says Sheldon. “He was a big jazz fan and a great guy, and I said, ‘Hey, lemme work on your show sometime.’ So he put me to work all the time.”

Even as a singer Sheldon became part of America’s cultural mainstream: His voice should be instantly recognizable to Gen-X kids who grew up with the educational TV series Schoolhouse Rock! Sheldon sang the whimsical description of how Congress works titled “I’m Just a Bill,” and portrayed the train engineer on the “grammar rock” song “Conjunction Junction.” Years later he did a parody of his own voice on a Family Guy episode, singing “Vagina Junction” for a sex-education send-up.

Sheldon’s television career peaked with a 18-year run on the Merv Griffin Show that stretched from the ’60s into the ’80s. He recalls the relationship with Griffin and the show warmly, a job that allowed him to use almost all of his skills: playing trumpet, singing and telling jokes. Typically, Sheldon characterizes this important period with humor. “It was great in a lot of ways,” he says. “But mostly because I got to sing, too, which was another whole money thing. Working the show was good money, already. But it got even better when I’d appear on camera on the show and sing and talk, and make more money.”

Throughout his acting assignments, Sheldon’s trumpet work continued to play a significant role in the West Coast jazz scene. A firm believer in the importance of practicing his instrument, he managed to find time and opportunities to keep up his chops. “When I’m doing good,” he says, “I practice every day. Usually, if you play hard and play more, that builds it up. When I was doing a TV show or a movie, I always practiced when we weren’t shooting. There’s always a lot time while they’re fixing the lights and everything. And sometimes, like when I put together my big band for the [1991] movie For the Boys, we’d play on the set when they were taking breaks in the filming. Bette Midler and James Caan were in that, and they loved it.”

The band Sheldon assembled for that WWII period piece became the foundation for the big band he still leads. Although only one or two of the original players remain, most of the musicians in the current lineup have been with him for many years. With a book of arrangements written primarily by Tom Kubis, with significant contributions from Bill Holman and others, the Sheldon big band is a shining light in Southern California’s surprisingly expansive catalog of large jazz ensembles. “We can only work with the big band once in a while, given the economy,” says Sheldon. “Mostly I’m performing with my California Cool Quartet. And since everybody works so much these days, I have about four different versions I can use, with guys like Joe Bagg and Mitch Forman on piano, Bruce Lett on bass, Dave Tull and Ray Brinker on drums. Great guys, all of them.

“Then I’ve got my organ trio, featuring Joe Bagg. I love that group, because it opens up so much room for me to play.”

Although Sheldon, who is divorced, has had to endure the deaths of two of his four children—his daughter Julie to an airplane crash, his son Kevin to cancer—he generally presents the demeanor of a contented guy.

But he still likes to keep some complaints in reserve, for joke-related purposes if nothing else. “Mostly I’m pretty happy,” Sheldon concludes. “I don’t really have anything to complain about, but I find stuff. I don’t drink, not for 20 or 30 years. I’m real healthy now.

“Except, like I said,” he adds with a grin, “for being too fat. And even that’s gonna change soon.”

Tenor saxophonist Julieta Eugenio was recently reminded of the distinct pleasure one can derive from masters of her chosen instrument. While cooking at home and … END_OF_DOCUMENT_TOKEN_TO_BE_REPLACED

Everything about Israeli-born tenor and soprano saxophonist Eli Degibri is a celebration. You can hear that in his sideman gigs with Herbie Hancock and Al … END_OF_DOCUMENT_TOKEN_TO_BE_REPLACED

It’s a cold March Friday night in New York City, but the crowd inside the Village Vanguard crackles with warmth as it engages with the … END_OF_DOCUMENT_TOKEN_TO_BE_REPLACED

When you hear tenor saxophonist Mark Turner’s name in conversation, it seems to be frequently linked to the notions of mindfulness, precision, and fastidiousness. “That … END_OF_DOCUMENT_TOKEN_TO_BE_REPLACED