Skip to content
Become a member and get exclusive access to articles, live sessions and more!
Start Your Free Trial
Home > Features > Jack DeJohnette Returns to His Roots In Chicago 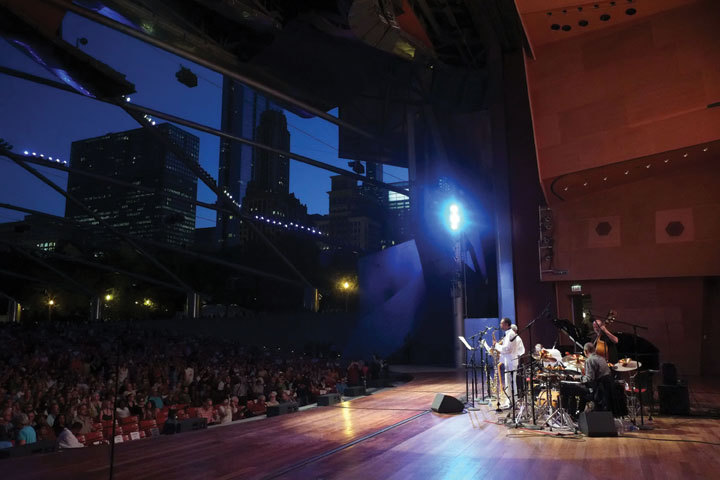 Jack DeJohnette, on drums, and Chicago legends at Millennium Park in August 2013

Aug. 29, 2013 was officially Jack DeJohnette Day in Chicago, as decreed by the mayor and announced by a city official from the stage before the Windy City-born drummer’s opening performance at the 35th Chicago Jazz Festival. DeJohnette maintained his composure as the official read the proclamation. But when she handed the document to him, he got a bit weak-kneed.

“Oh, wow!” he said, rocking back and staring up at the sky. As huge an honor as it was for him to be named an NEA Jazz Master last year, you got the feeling this award from his hometown meant even more to him.

You don’t often catch DeJohnette off-guard. As the 71-year-old has demonstrated over the decades, there is no musical situation he can’t command, from leading his experimental Special Edition bands to anchoring Keith Jarrett’s long-running Standards Trio to pursuing ethnic avenues with Danilo Pérez to revealing his considerable, classically trained skills on piano. DeJohnette is equally effective playing with superhuman speed and strength or showing off an uncommon light touch.

Performing in Millennium Park, the new permanent home of the Chicago Jazz Festival following its many years in Grant Park, DeJohnette drew upon the full range of his skills in leading one of his most illustrious ensembles. Dubbed Special Legends Edition Chicago, the band featured a rare reunion of legends from Chicago’s Association for the Advancement of Creative Musicians: pianist Muhal Richard Abrams and reed players Roscoe Mitchell and Henry Threadgill. Also featured was one of Chicago’s best and most prolific veteran bassists, Larry Gray.

DeJohnette’s stated intention in assembling this particular group was to reconnect with his musical roots. Though he never was a member of the AACM, he was an integral part of the free-jazz scene in Chicago in the early to mid-’60s, out of which that influential South Side collective emerged.

As documented in George Lewis’ history of the AACM, A Power Stronger Than Itself, DeJohnette was among the established local players who participated in Friday afternoon sessions with Threadgill, Anthony Braxton, Malachi Favors and other music students emerging from Woodrow Wilson Junior College. DeJohnette actually introduced Mitchell to Abrams at a 1963 rehearsal of Abrams’ fluctuating Experimental Band, a precursor to the AACM.

Even as DeJohnette’s ultra-special Special Edition celebrated the past at the Chicago Jazz Festival, there was little nostalgia in its fiercely relevant sounds. The set began with “Chant,” a Mitchell piece from the late ’70s whose progression from stately, pastel-toned minimalistic lines to intensely charged, bagpipe-like invocations couldn’t have been more gripping. On Abrams’ “Jack Five,” DeJohnette created a nifty prelude by running a hand-held mic under and above the hi-hat and cymbals to capture percussive overtones. He later rocked the piece, which found Threadgill in harder-edged form on alto than he has been lately, with a popping bass drum solo.

Throughout, DeJohnette was in his element with his polyrhythmic accents, booming tones and, on Mitchell’s “Think,” mallet strokes. The chamber-like piece opened with the composer on bass recorder, Threadgill on bass flute and Gray on cello. DeJohnette’s featured composition, “Museum of Time,” was a beaut, lifted by Abrams’ bluesy rolling figures and eloquent open attack and the richest harmonies of an evening dominated by overlapping melodies and counterpoint.

There were one or two hitches in the performance, but they were dealt with handily. One of the most interesting aspects of the concert was how, even as it showed off the styles and tonal approaches of the individual members, the center held firm. As a band, Special Legends Edition Chicago created a lucid, unified, layered sound that got deeper as the show progressed. Gray’s contribution as propulsive force and lyrical voice shouldn’t go overlooked: After all these years, both he and DeJohnette deserve honorary memberships in the AACM.

The performance was recorded by ECM, which released this year’s superb Special Edition box set (featuring Arthur Blythe and David Murray). One can only hope that with an album to promote, this not-to-be-missed ensemble will reconvene.

When you’re on TV, everybody knows you, or at least thinks they know you. Take Kevin Eubanks, who was on NBC’s Tonight Show five nights … END_OF_DOCUMENT_TOKEN_TO_BE_REPLACED

Jimmy Katz leads many lives. He is the preeminent currently active jazz photographer, and has shot more than 200 magazine covers and over 600 recording … END_OF_DOCUMENT_TOKEN_TO_BE_REPLACED

Take a look at Blue Note Records’ release schedule for 2022 and it’s hard to miss the significant percentage of electronic-oriented music. In March, the … END_OF_DOCUMENT_TOKEN_TO_BE_REPLACED