Skip to content
Become a member and get exclusive access to articles, live sessions and more!
Start Your Free Trial
Home > Features > International Jazz Day 2015: A Report From Paris 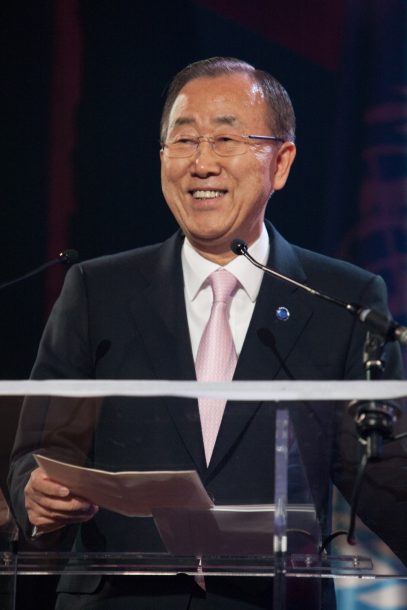 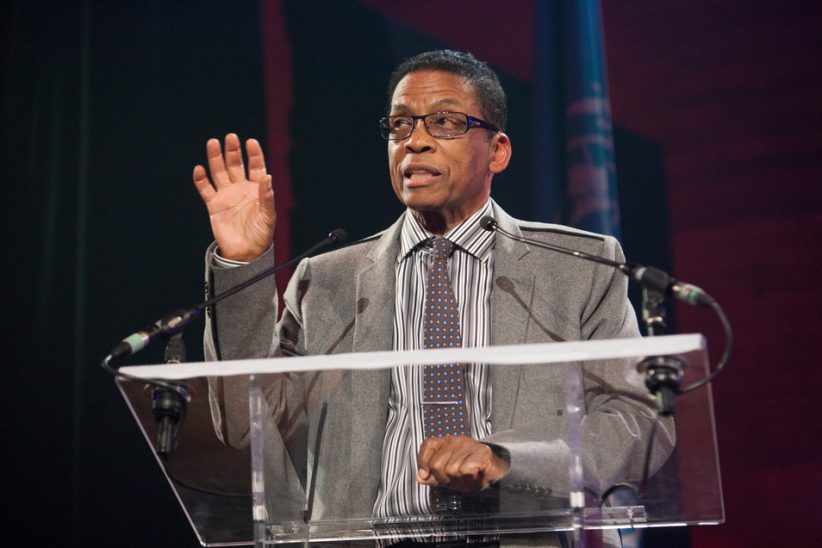 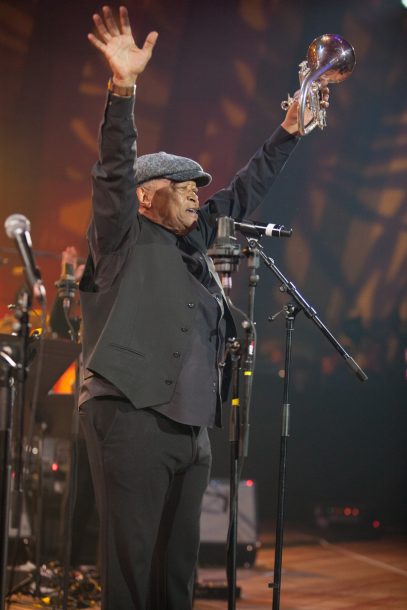 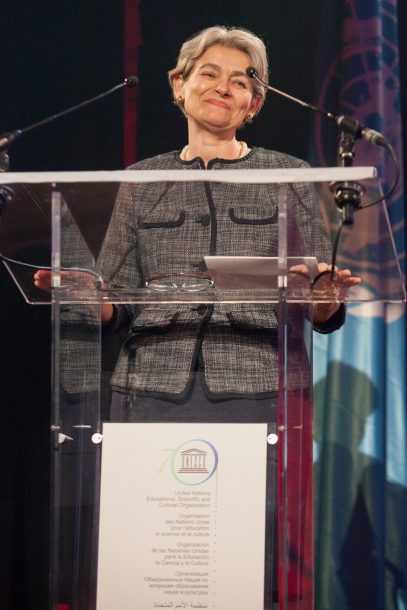 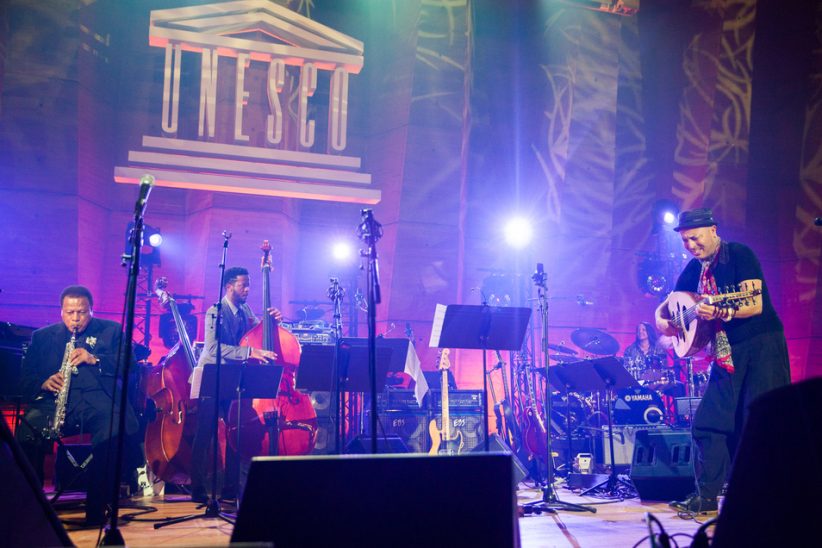 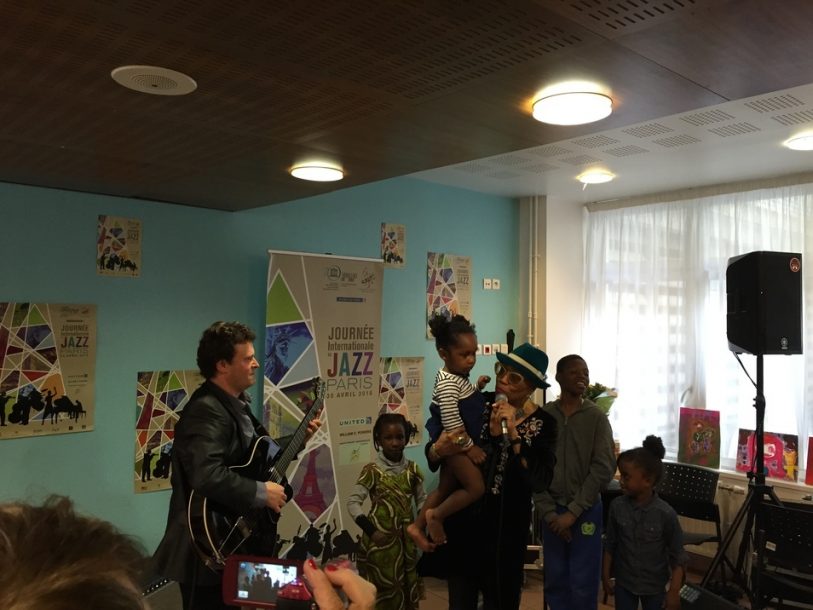 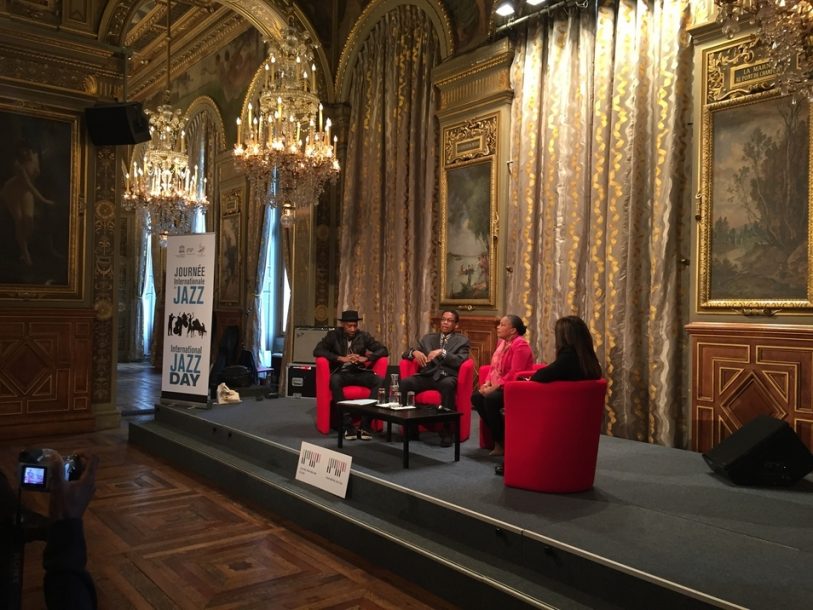 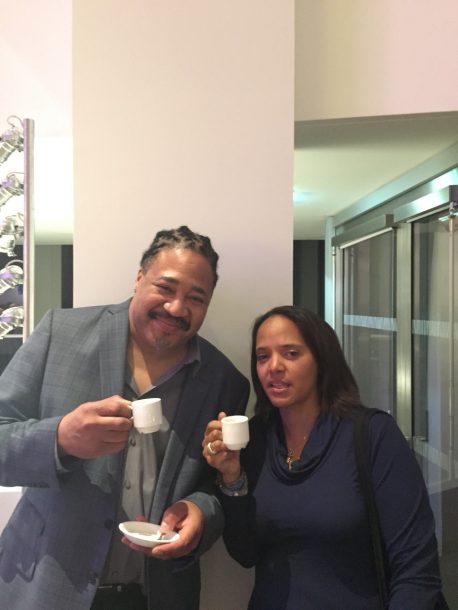 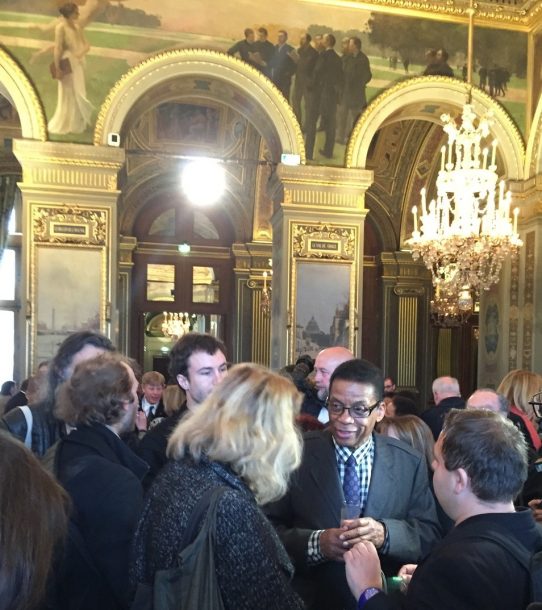 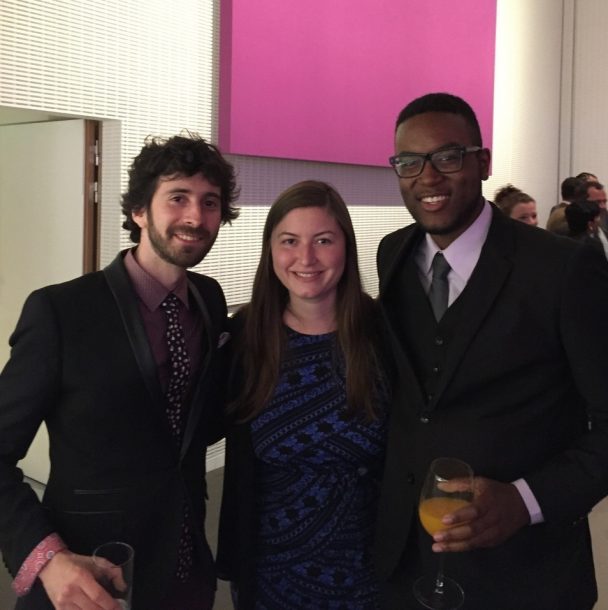 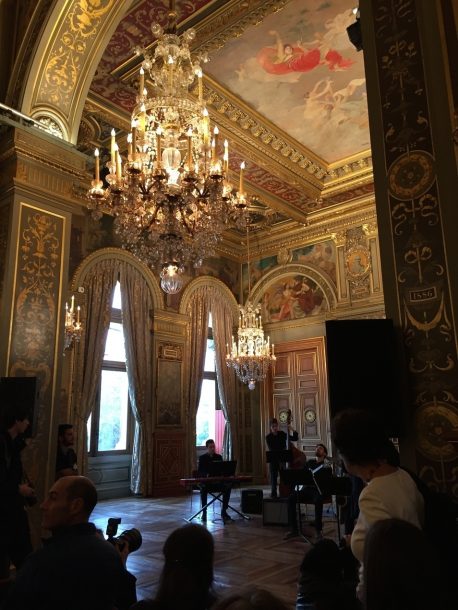 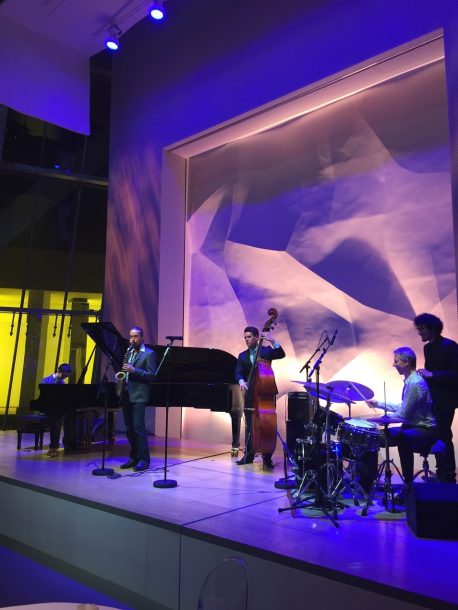 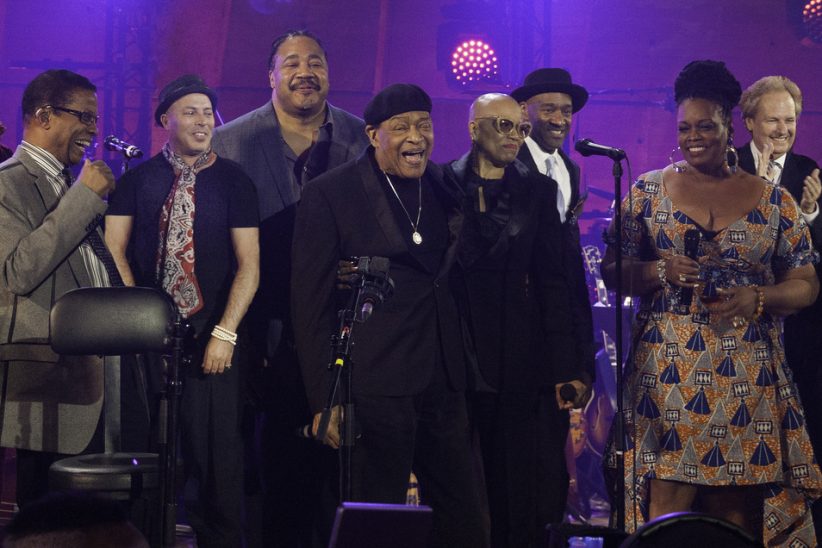 It’s no surprise that Ban Ki-moon listens to jazz. On April 30, the Secretary-General of the United Nations took the stage at the fourth annual International Jazz Day All-Star Global Concert at UNESCO headquarters in Paris to declare his support for the art form. “When you hear jazz, you learn the secret to solving any problem. You just have to improvise,” he said, underscoring the diplomatic mission of the celebration. “You just have to improvise.” Ki-moon then quoted the lyrics to “April in Paris.”

A mist hung over the City of Light, but despite the light rain, Paris was abuzz with syncopation for a 24-hour blue period, the culmination of Jazz Appreciation Month. Spearheaded by Herbie Hancock, UNESCO Ambassador for Intercultural Dialogue and Chairman of the Thelonious Monk Institute of Jazz, the global celebration united 196 countries in honoring America’s richest cultural export. In Paris, the 2015 host city, public performances, jam sessions, master classes, roundtable discussions, a boat cruise and film screenings provided a rhythmic backdrop across the city long considered the European capital of jazz.

“It’s possible to build bridges among disparate societies implementing the principles and ethics of jazz,” Hancock said. “Often, it’s just a few inches of earth geographically separating nations that are millions of miles apart philosophically, ethnically, religiously and culturally. We can find mutual understanding and common ground through jazz.”

At the welcome ceremony Thursday morning at Paris’ city hall, Mayor Anne Hidalgo awarded Hancock the Grand Vermeil Medal, the city’s highest honor in the arts. The 75-year-old NEA Jazz Master has ensured that for at least one day a year, diplomacy swings; for Hancock, International Jazz Day brokers the ultimate détente, offering a model of embracing dissonance and finding unexpected resolutions, a skill he learned from Miles Davis.

Six months after joining Davis’ second great quintet, Hancock played a performance of “So What” that was indelibly etched in his memory. “Miles was at the peak of his solo, and I played this chord that was so wrong. I wanted to slip under the piano,” Hancock recalled during a panel discussion at City Hall. “Miles took a breath and played some notes that made my chord right. I was so dumbfounded that I couldn’t even play for 30 seconds.” Years later, the master harmonizer realized the deeper significance of Davis’ effortless reaction to what might have otherwise been an experiment in modal harmony gone awry. “Miles didn’t judge what I played. I did. Miles accepted it, and he just heard it as something beautiful. It was that egalitarian idea-égalité-that’s the whole spirit.”

UNESCO Director-General Irina Bokova urged the diplomatic community to take that cue. “In times of change and uncertainty, we need the spirit of jazz more than ever before,” Bokova said, “to nurture freedom and dialogue, to create new bridges of respect and understanding, for greater tolerance and cooperation.”

Festivities began on April 29 at the home of U.S. Ambassador to France Jane Hartley, with a performance by the Thelonious Monk Institute Jazz Performance Ensemble featuring Dee Dee Bridgewater, followed by drummer Sangoma Everett. On Thursday, Bridgewater played a duo performance with guitarist Sylvain Luc at the Centre D’Herbergement de la Mairie de Paris, CHU Crimée, a women’s center for single parents from underprivileged backgrounds. With brio and élan, the multilingual chanteuse sang “Autumn Leaves” in French, dancing with the children and even engaging in playful call-and-response vocals.

Highlighting the social justice mission at the heart of International Jazz Day, Hancock took part in a panel discussion with UNESCO Artist for Peace Marcus Miller and French Minister of Justice Christiane Taubira. Miller grounded the discussion in the roots of jazz in slavery and the U.S. civil rights struggle. “The history is in rhythm,” Miller said of the spirituals W.E.B. Du Bois referred to as “The Sorrow Songs” and the funk of James Brown. “The words weren’t necessarily telling you the story. The music was.” In Congo Square in New Orleans, the generally acknowledged birthplace of jazz, playing music was officially banned before the Civil War out of fear that slaves could communicate through that harmonic and rhythmic code. Congo Square was one of the locations where the first International Jazz Day was held. Taubira hears the sound of protest in the backbeat. “Jazz is a kind of resistance,” she said. “We have to keep on fighting. Never, never give up.”

For Miller, jazz can be a part of that fight for universal human rights. “We just play notes, but we can help. We go to places in the world where it’s very difficult for world leaders to communicate. Cultural differences, ideological differences-we step right through all of that,” Miller said. “As jazz musicians, we can be the front line.”

For Miller and Hancock, on the geopolitical stage and at a concert hall, the bandstand signifies a demilitarized zone, the great equalizer where intercultural exchange transcends borders. “If you’ve got it, you’ve got it. We’re not going to hold you back. That’s democracy,” Miller said. “If you look at the stage tonight, it’s people of all different colors, men, women-it doesn’t matter. They’ve all got it.”

At the UNESCO concert, Masekela, the legendary South African trumpeter and former political exile whose dulcet tones helped topple apartheid, sang the propulsive 1987 anthem “Bring Him Back Home (Nelson Mandela),” evoking the spirit of protest that is interwoven into the fabric of jazz history. “Don’t burn the country down like other people do when they get their freedom, but instead let us build this country together with those who oppressed us before,” Masekela said before inciting the audience to clap in unison. “Let us forgive, but never forget, and never again in the future of this land will one group of people ever get to dominate others again.”

It was more than a history lesson. This year’s event, which coincided with rioting in Baltimore, a divisive debate over same-sex marriage in the U.S. Supreme Court, and a devastating earthquake in Nepal, carried an undertone of political urgency, but Hancock couched the gravitas of the polemic in a decidedly major key, using jazz to “turn poison into medicine.”

As all the performers came on stage for the concert’s finale, John Lennon’s “Imagine,” infusing the utopian ballad with a wealth of rhythmic diversity, it was a cathartic moment of peace made lyrical.

Jazz diplomacy has a longstanding tradition, dating back to 1955, when the U.S. State Department dispatched Louis Armstrong on his first diplomatic tour, prompting New York Times Stockholm correspondent Felix Belair to claim that “America’s secret weapon is a blue note in a minor key.” In 1986, Amnesty International’s Conspiracy of Hope tour raised millions, spread human rights awareness and influenced policymakers. In 1999, Daniel Barenboim and Edward Said founded the West-Eastern Divan Orchestra, a Middle Eastern youth orchestra that uses music to promote a peaceful solution to the Arab-Israeli conflict. The White House has a history of deploying the universal language of jazz to surmount the Tower of Babel effect both domestically and internationally. Richard Nixon brought Duke Ellington; Jimmy Carter brought Cecil Taylor; Bill Clinton, who Hancock recently dubbed the “commander in chief of swing” when the former president received the Thelonious Monk Institute’s Maria Fisher Founder’s Award, brought himself. But Clinton has a contender for most jazz-friendly administration-at the UNESCO concert, Hancock announced that the 2016 International Jazz Day will be hosted by Barack and Michelle Obama at the White House.

After a marathon schedule of performing, public speaking and shepherding the proceedings, Hancock attended the after-party and informal jam session at the Louis Vuitton Foundation, the Frank Gehry-designed postmodern building that resembles the hull of a ship pointing skyward. Embodying esprit de corps and tireless dedication to the cause, Hancock sat at the piano and improvised a five-minute sonata, building from clustered polyrhythmic voicings across all 88 keys toward a climax in a virtuosic evocation of the blues. It was a symbolic affirmation of everything International Jazz Day stands for; not just a sound, but a movement.

“I’ve seen and experienced musicians from opposing sides, enemy nations, unite to create the most beautiful music and tell the sweetest stories,” Hancock said. “Let’s celebrate International Jazz Day each April 30, but let us pledge to follow its values and reasons for existence every single day of the year.”

When you’re on TV, everybody knows you, or at least thinks they know you. Take Kevin Eubanks, who was on NBC’s Tonight Show five nights … END_OF_DOCUMENT_TOKEN_TO_BE_REPLACED

Jimmy Katz leads many lives. He is the preeminent currently active jazz photographer, and has shot more than 200 magazine covers and over 600 recording … END_OF_DOCUMENT_TOKEN_TO_BE_REPLACED

Take a look at Blue Note Records’ release schedule for 2022 and it’s hard to miss the significant percentage of electronic-oriented music. In March, the … END_OF_DOCUMENT_TOKEN_TO_BE_REPLACED