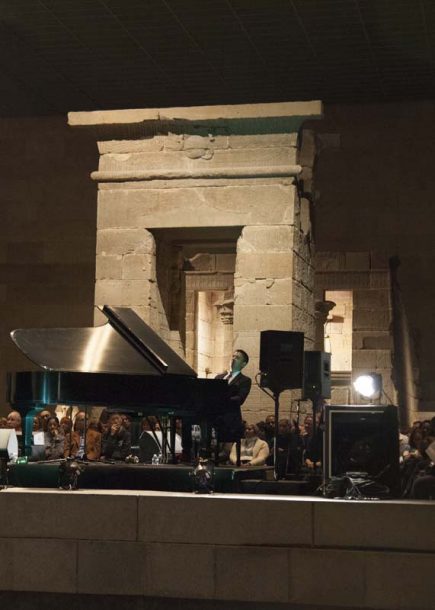 Iyer performs at the Met's Temple of Dendur, March 2015

In early 2014, when Limor Tomer, the general manager of concerts and lectures at the Metropolitan Museum of Art, was homing in on her choice for the museum’s next artist-in-residence, she came across an article about Vijay Iyer in the New York Times. In a piece about Iyer’s “Multiple Worlds”-musical, political, cultural-writer Nate Chinen suggested that “[t]here’s probably no frame wide enough to encompass the creative output of the pianist Vijay Iyer.” As Tomer recalled, “I said, ‘That’s it! I’ve got the frame, and that’s the Met Museum.'”

Immediately upon taking charge of the Met’s live programming three years earlier, Tomer started shaking up the prestigious if staid musical agenda of an institution long considered the pinnacle of American high culture. Jettisoning much of the museum’s schedule of classical chamber music and solo recitals, she broadened the scope of the Met’s venerable concert series, and sought out cutting-edge contemporary performers to engage with the museum’s collection during year-long residencies.

In a post on the “Met Museum Presents” blog announcing Iyer’s appointment, Tomer took pains to present him not as the jazz musician who breaches the citadel of art, but as an artist who transcends the old, rigid musical categories. Iyer’s selection was the result of a very specific set of criteria, including “his stature within his field, diversity of work, collaborative curiosity and relationship with material culture,” Tomer said. The consensus, arrived at in consultation with various museum colleagues, was simply that “Vijay ticked all the boxes.”

Envisioning his role at the museum, Iyer, 44, also focused on the opportunity it provided to explore the multifarious facets of his musical identity. “I didn’t have to be one kind of person, not just ‘the guy who played jazz,'” he said. “It’s not that I had an overall vision of what to do, it’s more that I didn’t have any sense of limits.”

After kicking off his residency with a trio performance in the shadow of the Met’s Temple of Dendur in March 2015, Iyer offered a Veterans Day performance of “Holding It Down: The Veterans’ Dreams Project,” a visceral multimedia exploration of the post-9/11 lives and dreams of Iraq and Afghanistan war vets which he debuted in 2013. It was a choice that spoke to Iyer’s commitment to bringing his deeply held political principles into the cloistered confines of the Met.

As for engaging directly with the museum’s vast repository of art and artifacts, it wasn’t surprising that Iyer would be drawn to its musical instrument galleries. So a month before the “Veterans’ Dreams” performance last November, he gave an impromptu concert on the museum’s prized Thomas Appleton pipe organ. Although he had never actually sat down at the keyboard of a pipe organ before, Iyer was game to give it a try-after all, he had watched a YouTube clip on “How to Play the Organ.”

While this event should have been just the first in a series of forays into the museum’s collections, Iyer’s residency was suddenly swept up into what would be the most significant event in the Met’s 2016 calendar. Following the recent relocation of the Whitney Museum to a new building in Lower Manhattan, the Met arranged to take over that institution’s previous home, a modernist gem designed by Marcel Breuer, as an exhibition space for modern and contemporary art. Since the Met Breuer, as it was dubbed, was scheduled to open on March 1, during the final phase of Iyer’s residency, Sheena Wagstaff, the chairman of the Met’s Department of Modern and Contemporary Art, recruited him to organize a marathon inaugural celebration.

Tasked with putting together a month-long program of musical collaborations during regular museum hours, eventually titled “Relation: A Performance Residency by Vijay Iyer,” the pianist decided to “treat it kind of like a party and invite all my friends,” he said. It turned out to be an impressive guest list, including Iyer’s triomates, Stephan Crump and Marcus Gilmore; the novelist, critic and photographer Teju Cole; jazz stalwarts Rudresh Mahanthappa, Steve Lehman, Tyshawn Sorey and Craig Taborn; the provocative rapper Heems; the multi-hyphenate performer Jen Shyu; and many others. Between live sets Iyer organized a series of “media breaks,” comprising screenings of a film he had scored, Prashant Bhargava’s Radhe Radhe: Rites of Holi, as well as a sound installation by Mendi + Keith Obadike.

A March 1 press preview for the Met Breuer provided the first opportunity to find out how Iyer’s residency would play out. The title “Relation,” he said, was a reflection of his belief that there could be “a different view of the center of things-that there is no center, only relations; everything exists in relation.” As if designed to provide proof of this thesis, the audience for the day’s first performance was treated to a master class in sympathetic communication. For more than an hour, Iyer and the tenor saxophonist Mark Turner engaged in an improvisational dialogue, built around a medley of jazz standards, that gradually melded two independent voices into a single seamless statement.

Over the next two weeks, Iyer and a wildly diverse cohort occupied a compact gallery located at the rear of the museum lobby, playing between four and six sets a day. By March 18, the Met Breuer’s official opening after a series of member previews, the events had established themselves as an integral part of the museum experience. Just as with any other exhibition, visitors displayed varied degrees of engagement. Some entered the dimly lit space and left after a few minutes, curiosity satisfied; many others claimed one of the 60 seats and remained, deeply immersed, until the final notes faded.

One of the highlights of Iyer’s residency was “Blindspot,” a multimedia project with Teju Cole, along with Linda Oh on bass and Patricia Franceschy on vibraphone. For 45 minutes, Cole read from a piece he’d written about his recent life on the road-from New York to Nairobi, Bali to Birmingham and beyond. As a series of his distinctive anti-“travel photo” snapshots were projected on the rear wall of the gallery, Cole explored the concepts of “blurred boundaries,” “signs” (both recognized and overlooked) and the “power of what is not seen.” As Cole’s words and images cycled through time and space, the trio’s soundtrack kept intuitive pace throughout its many shifting moods.

But it was a program titled “Thums Up” that best fulfilled another of Iyer’s goals for his Met Breuer residency: “bringing the energy of the street into the building.” Named for an Indian soft drink marketed by Coca-Cola, the performance featured the Pujabi-American rapper Heems (a.k.a. Himanshu Suri), whose incantatory monolog mixed autobiographical references to his Queens, N.Y., birthplace, ambivalent allusions to his cultural heritage, his predilection for certain controlled substances and shout-outs to his literary heroes. Backed by Iyer on piano and synth (along with a couple of South-Asian samples), Rafiq Bhatia on electric guitar and drummer Kassa Overall, it was a powerful expression of the hyphenated-American identity in the Age of Trump.

The climax of the Met Breuer’s opening festivities was the late-March premiere of an original Iyer composition commissioned in honor of Nasreen Mohamedi, a 20th-century Indian artist who is the subject of the museum’s first one-person exhibition. Like Mohamedi’s complex yet minimalist paintings and drawings, Iyer’s 50-minute work, a duet with the pioneering avant-garde trumpeter Wadada Leo Smith, explores the intersection of artistic creativity and spirituality. (A CD of the seven-movement piece, titled a cosmic rhythm with each stroke and recorded in the studio, was released on ECM in March.)

Asked if there was anything else planned for the remainder of his Met residency, Iyer responded, “That’s all that’s scheduled, but I have the feeling that once you check in [to the Met Museum’s orbit], you can never leave. This won’t be the last we see of each other.”

When you’re on TV, everybody knows you, or at least thinks they know you. Take Kevin Eubanks, who was on NBC’s Tonight Show five nights … END_OF_DOCUMENT_TOKEN_TO_BE_REPLACED

Jimmy Katz leads many lives. He is the preeminent currently active jazz photographer, and has shot more than 200 magazine covers and over 600 recording … END_OF_DOCUMENT_TOKEN_TO_BE_REPLACED

Take a look at Blue Note Records’ release schedule for 2022 and it’s hard to miss the significant percentage of electronic-oriented music. In March, the … END_OF_DOCUMENT_TOKEN_TO_BE_REPLACED