Skip to content
Become a member and get exclusive access to articles, live sessions and more!
Start Your Free Trial
Home > Features > Home & Away with Gerald Cleaver 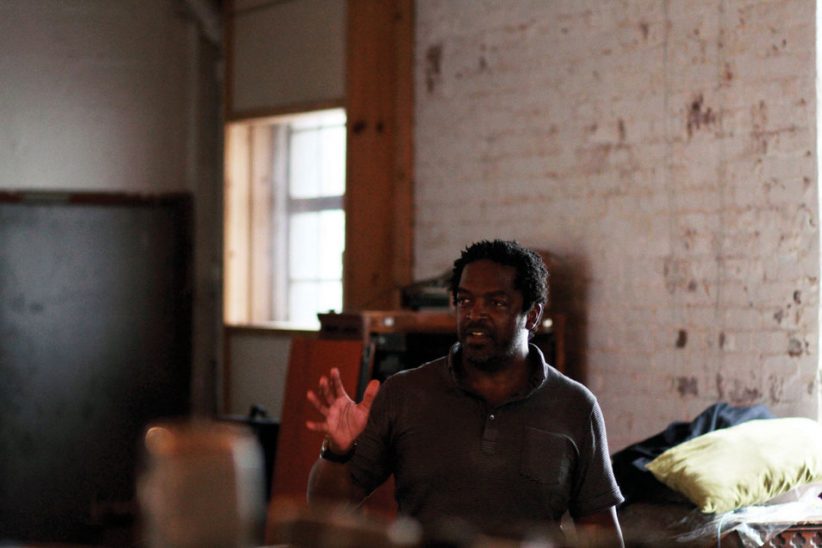 “I know it’s wacked to say this about someone playing now, someone of your own generation, but I think Gerald Cleaver is one of the greatest drummers in jazz history.” This is the view of Matthew Shipp, a fine pianist not known for a great caution with words. If other colleagues don’t state it so boldly, their admiration for Cleaver is just as deep and genuine. They know, as many listeners do, that the story of jazz and improvised music in the last 15 years would not be the same without the artistry of this 50-year-old Detroit native.

“[Guitarist] Joe Morris and I like to joke that you could have a band playing and you could take Gerald and drop him through the roof and he would come right in [playing the right thing], even if he didn’t know the people or the band,” Shipp remarks. “I’ve seen him be himself in so many different situations. He never ceases to amaze me with the beauty of his sound.”

What accounts for Cleaver’s flexibility and unerring instincts? “Detroit was so wide open,” the drummer recalls. “You weren’t constrained by cliques and such. You could play free, you could be swinging, you could do wedding gigs. I had a lot of different interests and I was able to enjoy all of them without interference. The way I play now is basically the way I played then, only I’m 30 years older.”

Cleaver has thoroughly blurred the distinction between avant-garde and straightahead playing. He’s versatile, but not in the sense of merely getting the job done. Rather, he views these streams as a common language that informs his own outlook as a leader-from the elegant and seasoned swing of his Violet Hour quintet to the wailing, electric, rock-infused attack of Black Host, his latest project.

Sadly, Cleaver had to rush back to Detroit and postpone our first scheduled interview: He had just found out that his sister died of a heart attack. His brother, shockingly, had died of complications from a stroke just one month earlier. (Cleaver is the youngest of seven siblings, from two marriages.)

Family is a recurring theme on Cleaver’s albums, making these losses all the more palpable and wrenching. Gerald Cleaver’s Detroit, his 2008 release with Violet Hour, is inspired by his hometown and the seasoned elder drummers (“extended uncles”) who guided him. His gripping Be It As I See It (2011), with the band Uncle June, is an appreciation of his parents and loved ones. It includes a poetry recitation by his wife, vocalist Jean Carla Rodea, and his father, the noted Detroit drummer John (“Johnny”) Cleaver Jr.

Plunged into mourning, Cleaver would nonetheless push forward, leaving for Europe the following week. “Working through life’s difficulties and issues,” he says, “music has definitely served a very therapeutic use and allowed me to give thanks to people.” He explains that “May Be Home,” the closing track on Black Host’s debut, Life in the Sugar Candle Mines (Northern Spy), is “meant to express the experience of life’s nadir. ‘Charles Street Quotidian,’ from Be It As I See It, is dealing with the exact opposite. I’m very interested in connecting myself to the full range, onstage and off.”

Gerald Cleaver was born on May 4, 1963. He lives in Brooklyn with Rodea; they married in 2008, inspiring Cleaver’s song “22 Minutes (The Wedding Song).” “My dad is from Springfield, Ohio,” Cleaver says, on the phone from his parents’ house in Detroit. “His people are from Kentucky. My mom was born in Greenwood, Mississippi. Her family migrated to Memphis and then on to Detroit by the time she was 11.” The theme of the Great Migration, the African-American exodus from the South, runs deep throughout Gerald Cleaver’s Detroit.

When you’re on TV, everybody knows you, or at least thinks they know you. Take Kevin Eubanks, who was on NBC’s Tonight Show five nights … END_OF_DOCUMENT_TOKEN_TO_BE_REPLACED

Jimmy Katz leads many lives. He is the preeminent currently active jazz photographer, and has shot more than 200 magazine covers and over 600 recording … END_OF_DOCUMENT_TOKEN_TO_BE_REPLACED

Take a look at Blue Note Records’ release schedule for 2022 and it’s hard to miss the significant percentage of electronic-oriented music. In March, the … END_OF_DOCUMENT_TOKEN_TO_BE_REPLACED