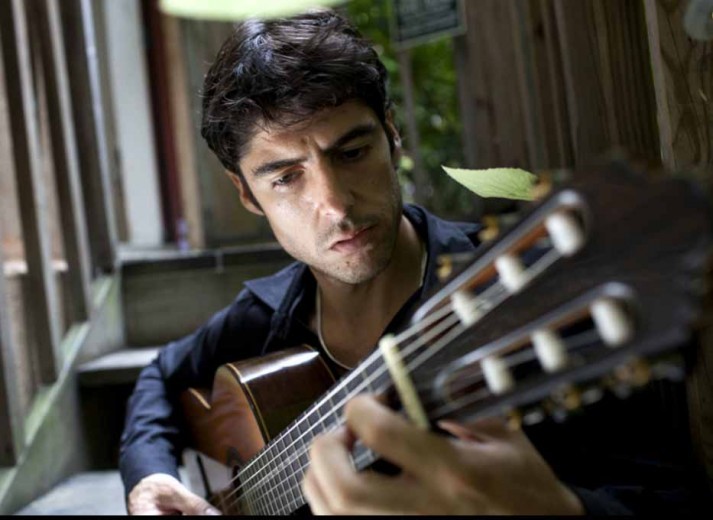 Before a rehearsal for Tales (Sunnyside), acoustic guitarist Diego Barber’s exceptional duo encounter with pianist Craig Taborn, both protagonists went for a run. “I’d circled Prospect Park, which is 3.4 miles,” Taborn recalls. “I asked Diego how far he’d gone. He said, ‘Not so long, just 20 miles,’ or something to that effect. He was chipper and ready to play. That’s when I realized what I was dealing with.”

A resident of Manhattan’s Alphabet City since 2007, Barber started running in 2010, completed his first half-marathon two months later, and subsequently completed a full marathon in under three hours. Rather than the New York streets, he prefers the rugged upstate terrain of the Catskills or even the high elevations of Utah and Colorado, where he traverses 50 or 100 miles at a stretch. “After 10 hours on the mountains, it’s like you are on drugs,” says 35-year-old Barber, a native of Lanzarote, the easternmost branch of the Canary Islands. “Every step is different-sometimes you’re on an incline or a descent, sometimes it’s rocky or smooth. When I run, I think about music. I am the conductor.”

Barber evokes these kinetic sensations palpably on “Kilian’s Mountains,” the 25-minute opening track of Tales, inspired by the incomparable Catalonian ultra-runner Kilian Jornet Burgada, whom he met and befriended in Utah in 2012. Soon thereafter, Barber personally “profiled” the 100-mile Western States Endurance Run, which Jornet won in 2011, then made several trips to Colorado with “my bad guitar-$100; I’d wake up, practice, run and compose.”

As it unfolds, “Kilian’s Mountains” portrays the multiple environments a runner encounters along the path. Within the ebb and flow, episodes of dialogue precede solo etudes and calm trance feels portend sweeping fortissimo climaxes. “I think in a minimalist way, because I love how repetition can make you feel after a while,” Barber says. The work is heavily scored, but he welcomes “crazy improvisations inside the form, where you don’t know if we’re improvising or if it’s 100-percent composed.”

Barber incorporates elements of atonality and electronica into “Cipres” and “Eternal 7.” The former piece references DJ Hugo Cipres, his cohort on last year’s 411, on which they sample, splice and reassemble lines by tenor saxophonist Seamus Blake and beats from drummer Ari Hoenig, both participants on 2011’s blowing-oriented The Choice. The subject of “Eternal 7” is soccer megastar Raúl González Blanco, whose glory years for Real Madrid CF transpired while Barber attended Madrid’s Conservatorio Profesional de Música Arturo Soria as a classical guitar student. There, Barber met the iconic guitarist Ricardo Gallén-composer of the new album’s closer, “Im Park (To Diego Barber)”-who later taught Barber at Salamanca Conservator and imparted to his student the notion of “playing classical guitar without limitations.”

After beginning electric guitar at 10, Barber sought to match such virtuoso shredders as Joe Satriani and Steve Vai. But at 16, Barber, whose parents opposed sending him to music school in the U.S., decided to study classical guitar. In a year, he learned enough to pass the audition for Arturo Soria, joining a peer group trained primarily on the instrument since pre-adolescence. “I suffered a lot,” he says of his learning process. “I am really competitive, but the change was hard. It’s like playing piano and violin. In Madrid I’d go to master classes and everyone knew from my positions and sound that I was coming from electric guitar. I fought to change all my technique 100 percent, so no one could know.” He holds up four fingers. “It’s like I have four violins, four voices; each finger can work independently at separate things.” Throughout Tales, Barber sets himself the challenge, Taborn remarks, “of opening up possibilities for his instrument.”

“Part of my secret is that I come from electric guitar,” Barber says. “The classical guitar doesn’t give me anything good for the electric, but the electric gives me good things for my own music.”

As he speaks, Barber is anticipating six weeks of concerts-some featuring Bach and Scarlatti, some featuring original music-and master classes in Germany, Spain and the Canary Islands. “I will play them perfectly,” he says. “But I think guitarists are the worst classical musicians. We don’t know what’s happening but we repeat like birds, as though we are machines.”

He recalls a moment during his postgraduate tenure at Salzburg’s Universität Mozarteum: “I made two mistakes playing a Scarlatti and couldn’t sleep. Another time at a concert, I discovered myself waiting for the guitarist to make a mistake. This is not music.” He makes a cutting motion toward his ropy forearm. “I have friends who have hurt themselves. That’s when I decided to come to New York, to see the new music, to learn jazz.

“I don’t enjoy playing classical music as I do my own music, playing jazz, playing with Craig. If Bach were here, he would play his music in different ways. When the jazz musician plays classical music, the articulation and dynamics are not perfect. I love it. I’m sure Bach would love it, too.”

Put a “the” in front of a name and it acquires historical heft. The Thelonious Monk who entered New York City’s WOR Studios as Halloween … END_OF_DOCUMENT_TOKEN_TO_BE_REPLACED

On the enchanted evening of August 16, 1958, Ella Fitzgerald took to the stage of the legendary Hollywood Bowl. There, with a lustrous orchestra conducted … END_OF_DOCUMENT_TOKEN_TO_BE_REPLACED

Be careful what you wish for.  By the beginning of 2020 guitarist Mary Halvorson, one of the most acclaimed musicians of her generation, was also … END_OF_DOCUMENT_TOKEN_TO_BE_REPLACED

Guitarist Will Bernard bears the bittersweet blessing of virtuosic skill and eclectic taste, making his music a perpetual delight and yet hard to categorize. Maybe … END_OF_DOCUMENT_TOKEN_TO_BE_REPLACED