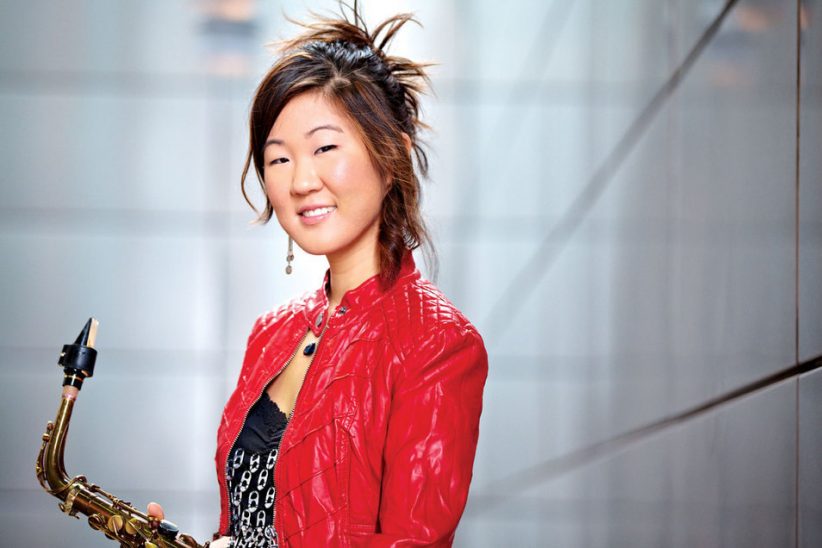 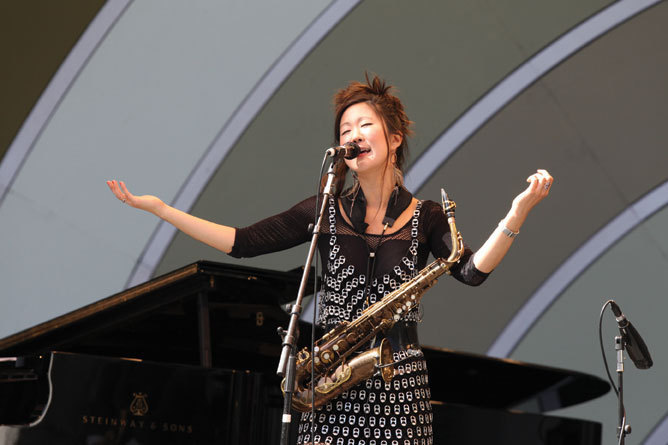 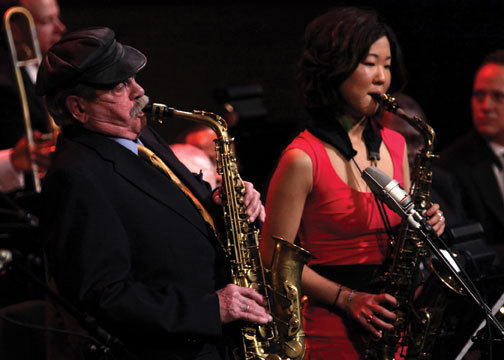 Grace Kelly with Phil Woods at Jazz at Lincoln Center, 2012 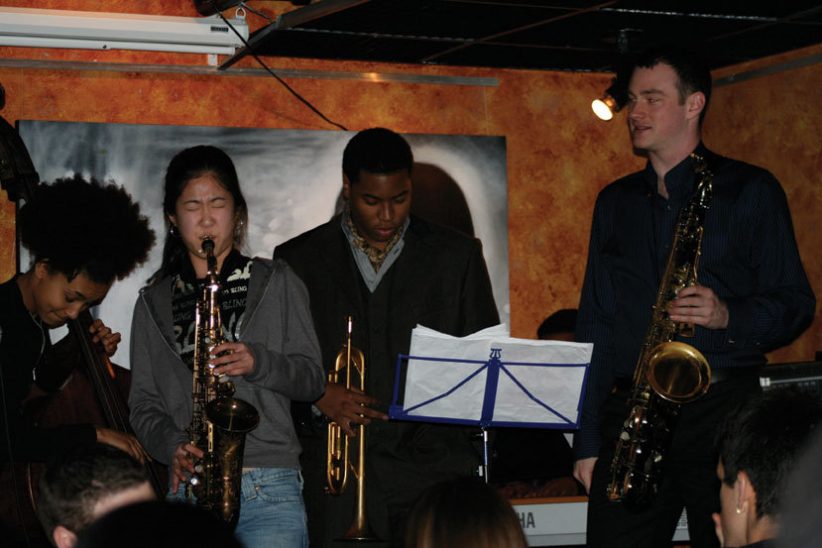 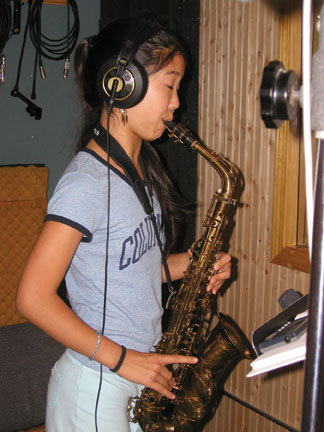 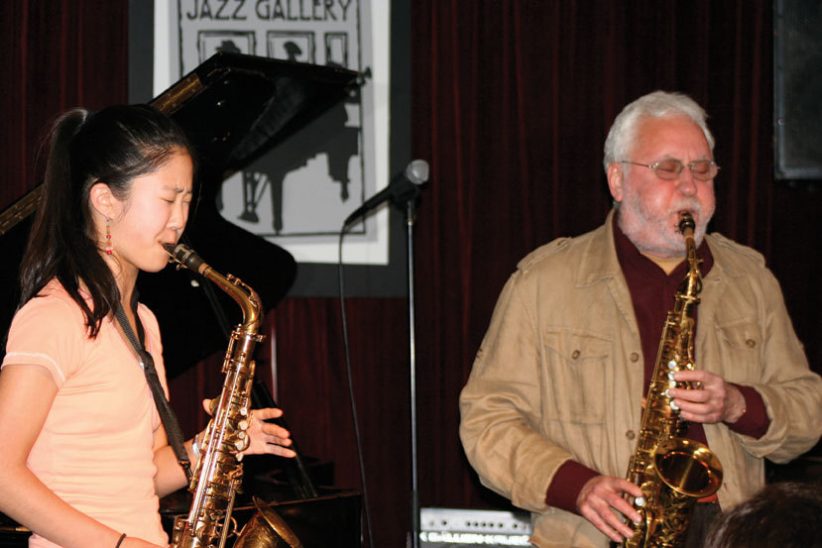 Grace Kelly with Lee Konitz in 2006

There’s a clip on YouTube from the alto saxophonist and vocalist Grace Kelly’s first gig ever. It’s June 2002, she’s 10 years old, and she’s in a Borders bookstore, duetting with an adult pianist on “Besame Mucho.” The saxophone, too heavy for her to hold while standing, rests on a pillow; she’s sitting on its case. She doesn’t improvise, and there’s nothing virtuosic going on, but her playing is strong: big, confident and in tune. A jazz star is born.

In November 2011, Kelly, then 19, issued her first music video, for the original song “Sweet Sweet Baby.” In it, she twirls in a field; lays in a hammock with her dog, Asher; and plays her horn while encircled by people holding hands. Save for some tart alto and shimmering electric piano, the track and its video are decidedly pop-focused: more MTV-or what MTV used to be-than JALC.

But by the end of 2011, Kelly had played with the Jazz at Lincoln Center Orchestra. And recorded collaborative albums with saxophonists Phil Woods and Lee Konitz. And scored players like drummer Terri Lyne Carrington and trumpeter Christian Scott for her other LPs. And played at the Newport Jazz Festival. And toured the world. In some ways, Kelly, who relocated from the Boston area to Los Angeles earlier this year, had exhausted the jazz life before she could legally drink.

At a concert in June at the Levoy Theatre in Millville, N.J., the multiple personalities of Grace Kelly were in full effect. With her hair up and big earrings hanging down, and garbed in a loud, funky, chainmail-like dress, the 21-year-old Korean-American saxophonist led her bandmates-trumpeter Jason Palmer, guitarist Pete McCann, bassist Evan Gregor and drummer Mark Ferber subbing for Jordan Perlson-through New Orleans rhythms (“Filosophical Flying Fish”), singer-songwriter fare (“Eggshells”), smooth-jazz interpretations (Bill Withers’ “Ain’t No Sunshine”) and straight-up swing (a duet with Gregor on “Bye Bye Blackbird”).

In between songs, she talked a fair amount and bantered with an audience member. Parts of the night were precious-she shimmied while soloing during “Fish” and improvised lyrics about being in Millville during “Blackbird”-but the seriousness that often sucks the life out of jazz performances was missing from Kelly’s routine. It was a refreshing take on what a show from a jazz quintet could be, at once indicative of old-school showbiz values and newer, pop-infused attitudes about what jazz needs to do to reach the uninitiated.

During a post-gig interview in the basement of the Levoy, I ask Kelly about the quote on her website where she says she’d like “to stay in jazz but also do different things, bigger arrangements, like Stevie Wonder and George Benson.” “I think that what’s exciting to me is musicians who push the music forward. And it’s happening in every way and any way,” Kelly tells me. “For me, I’ve always loved pop music and jazz, so someone, for example, like Stevie [Wonder], he’s pushed so many boundaries with chordal brilliance, and melodies, and at the same time has made ’em extremely, um, what’s the word?”

“Accessible,” interjects her stepfather and manager Bob Kelly, who sat in on the conversation.

“Accessible,” she repeats. “And it touches me. And I think it’s great that, you know, you can take jazz to this place where people can also sing along with it, and connect with it on that level. And I think I’m just naturally … I lean towards that part of moving the music forward, because as a little girl, you know, I was listening to great pop music as well, and singing along to these songs. So to see how jazz can be melded into that, to me, is the next progressive step. Because the other thing is, like, I love playing bebop and traditional jazz but I also feel like it’s important to make a mark as an artist and continue pushing it forward. And as a young person who listens to a wide variety of things, I think it’s only fitting to come up with what I listen to, you know?”

And yet Kelly has been fusing pop and jazz from the start. Growing up in Brookline, Mass., Kelly-born Grace Chung-found the piano first, then the clarinet, but settled on saxophone at age 10. Less than two months later she was performing at Borders, and just two years later, at age 12, she released her first album, Dreaming. Like each of her subsequent seven discs, it’s out on PAZZ-pop and jazz or peace and jazz-Productions, the label she cofounded with Bob. And like her current and future work, 2004’s Dreaming doesn’t stop at jazz. There are standards, but also a Beatles tune and “On My Way Home,” the first song Kelly ever wrote. A pure pop piece, “Home” is about pining for, seemingly, a lover and the end of a stint on the road. Kelly penned it when she was 7.

Guitarist Will Bernard bears the bittersweet blessing of virtuosic skill and eclectic taste, making his music a perpetual delight and yet hard to categorize. Maybe … END_OF_DOCUMENT_TOKEN_TO_BE_REPLACED

At 95, Chicago-based guitarist George Freeman is among the world’s oldest active jazz musicians. Although he came of musical age in the 1940s and counts … END_OF_DOCUMENT_TOKEN_TO_BE_REPLACED

When you’re on TV, everybody knows you, or at least thinks they know you. Take Kevin Eubanks, who was on NBC’s Tonight Show five nights … END_OF_DOCUMENT_TOKEN_TO_BE_REPLACED