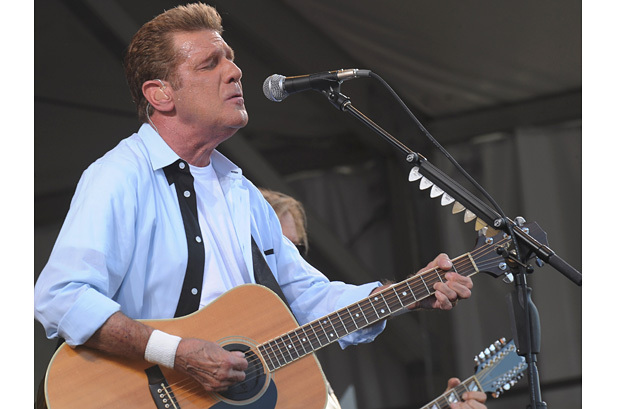 Among the myriad rock stars who have, for better or worse, navigated late-career forays into the Great American Songbook, 63-year-old Glenn Frey can legitimately claim his new standards project, After Hours (Universal), has been percolating for two decades.

In the early ’90s, the Eagles frontman, who also earned solo success with megahits like “The Heat Is On” and “Smuggler’s Blues,” was briefly co-owner of an Aspen restaurant. His business partner, Broadway producer Fred Mayerson, envisioned a classy joint that was, says Frey, “dress-up, martinis and jazz.” The task of filling the music quotient fell to Frey. “I bought all the records you could think of that fit-Ella, Louis, Billie, Tony, Frank, Sarah, Ray. The restaurant didn’t last long, but I had about eight hours of music that I listened to all the time.”

Years later, in 2000, Frey joined the celebrity fray at the annual AT&T Pebble Beach National Pro-Am. “Up there,” says the L.A.-based Frey, “Clint Eastwood is king. About two weeks before the tournament, you’d get a letter that said, ‘Mr. Eastwood requests your presence at the AT&T tournament volunteer party. Please perform one of your familiar hits and another song from the [Great American Songbook].’ So I went back to my eight hours of music. Turns out that Tony Bennett and I have similar registers. I did ‘I Left My Heart in San Francisco’; then, the next year, ‘I Wanna Be Around’; and ‘The Good Life’ the year after that.” That third year, Frey was dining with fellow tournament mainstays Huey Lewis and Michael Bolton and, he recalls, “Michael says to me, ‘Your voice sounds very comfortable with this type of material. Maybe you should do an album.'”

Between Eagles tours and other gigs, it took another eight years for Frey to carve out adequate time to do the album the way he wanted. He recruited multi-instrumentalist Richard F.W. Davis and pianist Michael Thompson-both longstanding veterans of Eagles tours and recordings-as co-producers, arrangers and bandmates. Another Eagles stalwart, drummer Scott Crago, and bassist Reggie McBride were added as the core rhythm section. Additionally, two tracks feature the producers’ longtime friend and colleague, horn player Bill Armstrong, in what turned out to be one of his last sessions. After Hours is dedicated to his memory. “I wasn’t interested in just showing up and singing for three days,” Frey says of the recording process. “I learned from making records with the Eagles that the amount of time you invest in something always shows.”

Adds Davis, “There are other situations where it seems like someone just went out and got a fake book, which is not Glenn’s approach at all. One of the wonderful things about doing [the album] at the pace we did is that we had plenty of time to play with it. It wasn’t just, ‘Well, let me pull out my six most interesting sounds, and one of them will have to work.’ … It’s great to hear Glenn take his time and sing music that has so much subtlety.”

Though the results are strongly reminiscent of Willie Nelson’s 1978 gem Stardust, with an understated Frey demonstrating remarkably affecting tenderness, he cites Linda Ronstadt’s trio of mid-’80s albums with Nelson Riddle as “the standard for me. Those albums are seamless-damn near perfect.” He intentionally avoided listening to like-minded discs from contemporaries like Rod Stewart, Carly Simon and Boz Scaggs, but did check out their playlists to avoid duplication. “I didn’t want to make obvious choices,” he notes. “The two Dinah Washington songs-‘I’m Getting Old Before My Time’ and ‘It’s Too Soon to Know’-aren’t the most recognizable tunes. I also always wanted to do ‘The Look of Love’ and [Brian Wilson’s] ‘Caroline, No.’ I just figured the record is about me singing romantic love songs, with the exception of ‘Route 66,’ and the guy in that song loves to drive and give directions, so it’s a love song for him!”

The album’s one original, the title track, dates further back than Frey’s short-lived Aspen nitery. “It’s from 1984,” he explains. “It was intended for my second [solo] album, The Allnighter, but somehow never made it onto the record. In my mind, that song takes place from 6 o’clock at night until 6 the next morning.” Neither Thompson nor Davis had heard the song before, but, says Davis, “It was completely the right thing; the perfect closer for this project.”

It was Thompson’s idea to hire Alan Broadbent to write orchestral arrangements. “My task was to add strings to the rhythm tracks that Mike Thompson and Richard Davis had already laid down,” says Broadbent. “The hard work was done and I could use my imagination to enhance the various moods that Glenn was trying to express. … He puts his feelings where his voice is. I have a lot of respect for him.”

Earlier, during the song selection process, Davis had challenged Frey and Thompson to “think of the slowest, steamiest track they knew.” Davis’ own choice was Shirley Horn’s “Here’s to Life.” Frey was immediately taken with Horn’s performance and added the song to After Hours. When introduced to Broadbent, Frey mentioned Horn’s recording, noting how well she interacted, as both vocalist and pianist, with the bass player. To which Broadbent replied, “Well, no. She sang on that recording, but I played the piano.”

“How serendipitous is that,” says Frey, concluding that, “the greatest two days in the entire process were getting to sit in the control room and watch 22 string players and a couple of flutes and French horns lift my songs to heaven. At the end of the second day, I addressed the orchestra and said, ‘What you’ve done to this material is beyond my wildest dreams. I’ve been a rock ‘n’ roll star for most of my adult life, but today I am a musician.'”

When you’re on TV, everybody knows you, or at least thinks they know you. Take Kevin Eubanks, who was on NBC’s Tonight Show five nights … END_OF_DOCUMENT_TOKEN_TO_BE_REPLACED

Jimmy Katz leads many lives. He is the preeminent currently active jazz photographer, and has shot more than 200 magazine covers and over 600 recording … END_OF_DOCUMENT_TOKEN_TO_BE_REPLACED

Take a look at Blue Note Records’ release schedule for 2022 and it’s hard to miss the significant percentage of electronic-oriented music. In March, the … END_OF_DOCUMENT_TOKEN_TO_BE_REPLACED