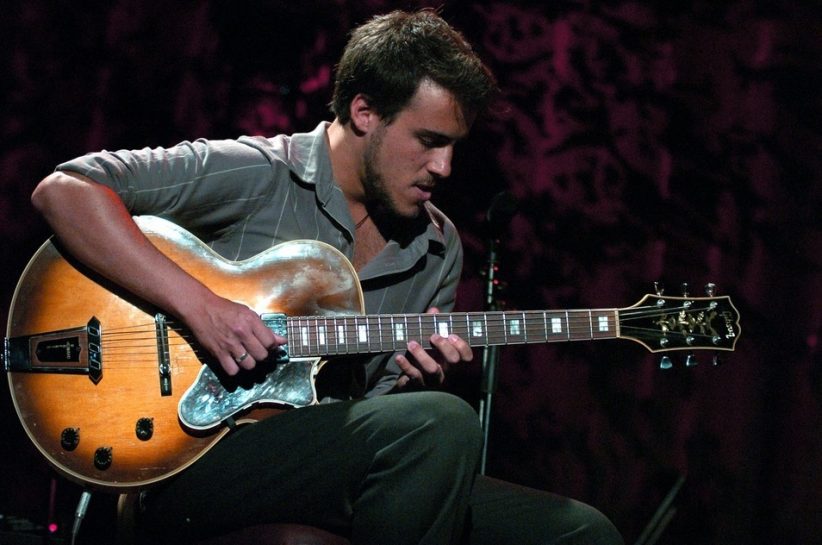 In the eyes of Israeli guitarist Gilad Hekselman, life is simple. Based in New York since 2004, the 30-year-old guitarist believes he was invited to contribute a track to the star-studded compilation Everybody Wants to Be a Cat: Disney Jazz, Volume 1 because, on the night one of the album’s producers first heard him, he was playing through his “good amp.” When a musician friend who had never composed before asked Hekselman, “How do you write a song?,” he began crafting a tune with her on the spot. That burst of creativity became “Dreamers,” the assertive, acoustic-guitar-driven cut that crops up near the end of Hekselman’s fourth and latest album, This Just In (Jazz Village).

And This Just In, which features bassist Joe Martin, drummer Marcus Gilmore and, on three tracks, tenor saxophonist Mark Turner, includes five tantalizing pieces that conclude in under a minute. Dubbed “Newsflashes,” those entries mimic the improvs that Hekselman and Gilmore naturally get into during sound checks while waiting for Martin to set up. Though Hekselman’s ax work in general is dazzling and intricate, a sense of modesty and transparency is at the warm, expansive heart of This Just In.

Since leaving Israel for the Big Apple, Hekselman has played with great New York-based musicians like drummer Ari Hoenig and tenor saxophonist Joel Frahm. But his deepest musical bonds have been with Martin, who plays on all of Hekselman’s albums, and Gilmore, who drums on the last three. The trio’s synergy is undeniable, and readily apparent: On the title track from This Just In, for instance, Hekselman’s determined, bubbling lines unspool and levitate over Gilmore’s magnetic encouragement and Martin’s humble rumbling.

“Throughout the years, we developed a language; I think we have a strong thing going,” says Hekselman. “We have a band sound. That’s what I keep hearing from people that hear us play. It’s like, ‘Wow, there’s something different about it, because you guys have this band sound.’ And yeah, I mean, it’s Joe Martin and Marcus Gilmore-they’re incredible. They’re so good within or outside of my band as individuals. And they have a special hookup going on between themselves, too, which I’m proud to announce that I was the first one to initiate. But now a lot of bandleaders call them to be their band, and it’s a beautiful thing.”

One of those bandleaders is Turner. But the saxophonist has gotten more than a rhythm section from Hekselman: He’s taken away the experience of working with someone whose sounds inhabit the same universe as his. “I feel like [Hekselman’s music is] part of the language that I’m involved in,” says Turner. “Whereas there are other bands where you might play as a sideman and the language is further away from your center. And Gilad’s is close.”

For Turner, though, Hekselman is more than a kindred spirit. He’s also a leader who understands how, when it comes to directing musicians, less is more. “I think he knows himself well enough, and he’s comfortable enough with himself and what he does, to allow other people to do what they do,” explains Turner.

“Hex” is concerned with freedom, sure, but also design and concision. Inspired by some of his favorite albums-Abbey Road, The Blues and the Abstract Truth, At the Pershing: But Not for Me-the guitarist kept This Just In short and sweet, and gave it a loose but meaningful concept (it’s supposed to mirror a news broadcast). “In general, when you structure anything-you structure a solo, you start to structure a show-I think about how to keep it interesting and have some kind of sense of direction,” says Hekselman. “I also wanted to keep the album kind of short. … I kept it at 50 minutes. And that was important for me too. … I noticed that the albums I always come back to [as a listener] are always short. Most of them are usually, like, 40 minutes. And they have a structure. It’s not just a bunch of tunes. So I try to learn from that.”

He’s also learned from Turner. At a clinic one time, Hekselman heard someone ask the saxophonist, “What do you think about when you play?” Turner’s answer was an idea that influenced the guitarist’s own philosophy. “‘I just try to make the music sound better,'” Hekselman remembers Turner saying. “‘I try to see what the music needs and try to follow that.’ And that should be the one commandment of the jazz musician.”

When you’re on TV, everybody knows you, or at least thinks they know you. Take Kevin Eubanks, who was on NBC’s Tonight Show five nights … END_OF_DOCUMENT_TOKEN_TO_BE_REPLACED

Jimmy Katz leads many lives. He is the preeminent currently active jazz photographer, and has shot more than 200 magazine covers and over 600 recording … END_OF_DOCUMENT_TOKEN_TO_BE_REPLACED

Take a look at Blue Note Records’ release schedule for 2022 and it’s hard to miss the significant percentage of electronic-oriented music. In March, the … END_OF_DOCUMENT_TOKEN_TO_BE_REPLACED