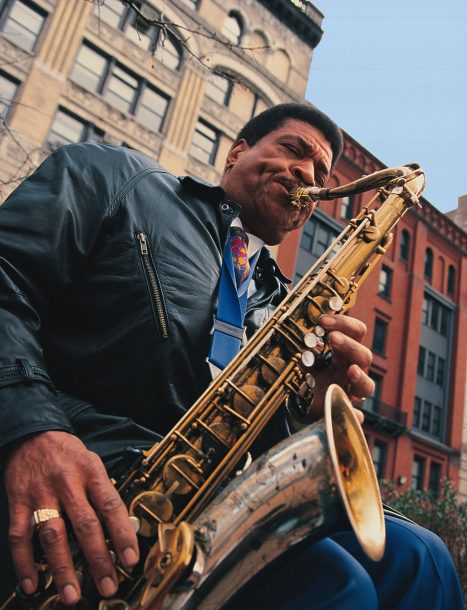 I catch George Coleman cooking, and for once, it doesn’t involve a saxophone.

“Oh yeah, I’m cooking dinner for my daughter,” he says into the phone. Nothing elaborate; at least not as elaborate as the Coleman family’s penne arrabiata featured in the recipe anthology Jazz Cooks (Stewart, Tabori & Chang). “I’m making some fried chicken, pinto beans, corn,” says Coleman. “I use variations of other recipes, just like in music. It’s like Charlie Parker said, ‘There’s nothing new under the sun’; everything’s a variation of something else.”

Coleman stirs that particular theory a bit more, folding in a few specifics: “My music is a mixture of everything: a little bit of Latin, slow ballads, a little bebop, funky blues, even a little tongue-in-cheek Dixieland. On our new album [Tribute to Rodgers & Hart on Telarc] we play ‘My Favorite Things’ in a sort of free bag, like Coltrane did, but it’s a little bit different; we incorporate some of his harmonic ideas, but we don’t use them in a vamp, the way he did.” Instead, Coleman and pianist Harold Mabern recast Coltrane’s open-ended harmonies within the tune’s original structure, and this much-worked song becomes, amazingly, once again fresh.

The decision to tackle the Rodgers & Hart songbook stems from a 1997 concert honoring Rodgers, at which Coleman’s quartet shared the stage with the Carnegie Hall Jazz Orchestra. That concert helped remind him of the many and varied tunes written by Rodgers, who sometimes gets lost in the shuffle of the great American songwriters. (Rodgers’ music carried, cajoled and captured the innovative lyrics of his more flamboyant partner Lorenz Hart, whose tragic life traditionally grabs the spotlight.) The experience of exploring Rodgers’ music “really opened my eyes,” Coleman says, “you’d be surprised at all the things he’s written.”

How appropriate: most people are surprised at all the saxophone George Coleman has played, and continues to play. At 63, he too tends to gets lost in the shuffle-in this case the shuffle of his contemporaneous saxophonists. Perhaps this has to do with the timing of his most famous professional association: Coleman joined the Miles Davis Quintet in 1962, with the shadow of John Coltrane still hovering over the tenor chair, and then left when the final component of The Band of the ’60s arrived, in the person of Wayne Shorter. Or perhaps it has to do with other decisions Coleman had made in his career; he admits to having been “a little bit too contented, more laid-back than some of my more aggressive contemporaries, and that can be detrimental to one’s career.”

Whatever the reason, Coleman lacks the name recognition of many other reedmen-but not among other saxophonists, who speak of him with respect verging on awe. With exquisite command of tenor, alto, and soprano saxes, he gives each horn its own persona. On any of them, his technique bears study: like a cat, his solos lope effortlessly until suddenly erupting in a well-timed, dynaflow surge of efficient energy. In addition, his place in jazz history will remain secure as long as one can buy or hear such albums as Miles Davis’s In Europe and Herbie Hancock’s Maiden Voyage, on which Coleman’s cooly elliptical title-track improvisation-the very first solo heard on that disc-remains a defining moment of 1960s jazz.

The period itself remains a defining highlight of Coleman’s life, even though he has had his share of them. The first came when, at the behest of his high school band master, Coleman got to arrange a couple of Ray Charles tunes for a concert starring Charles himself. It happened in Coleman’s hometown of Memphis; years later, when Charles passed through town again, he asked whatever had happened to that teenaged arranger, and was startled to learn that the saxist he had heard with Miles was one and the same.

Coleman credits Memphis with fostering his inclusive approach to music: “The environment was very fertile. I grew up in the R&B era and basically because of geography, being from the south, that was the first music I became involved with. But I was also hearing a lot of bebop, and along with that, I picked up a lot of harmony from the music teachers in Memphis, most of whom were piano players. So it all fused together; it just incorporated itself, and by the time I joined B.B., at the age of 20, I had everything in there.”

“B.B.,” of course, means B.B. King, in whose band the young alto man began playing tenor as well; after that came an influential stint in Chicago, home of such great tenor men as Gene Ammons, Johnny Griffin, Eddie Harris, and John Gilmore, all of whom left their mark on Coleman after he arrived in the late 1950s. He went as part of a “Memphis mafia” that included pianist Mabern, saxist Frank Strozier, and trumpeter Booker Little; “We sort of invaded Chicago all together,” he recalls; “as a result, they began to know who we were. That was a great transition [from the south].” Two years later, Coleman moved to New York, where he became part of first Max Roach’s band and then Miles’. In each of them, his ferocious, omnivorous improvising gained a demanding but welcome showcase.

“That has to be somewhere near the pinnacle,” he says, describing that period, “although as long as I’m on the planet, I’m always going to be trying to get to the top, and I don’t think I’ve reached there yet. You know, back when I was a kid, I studied all the time; now, when I teach, I’m thinking that since I know all this stuff already, maybe I ought to start taking it further.”

That doesn’t mean any disrespect for the past. Listening to a handful of his past recordings-such as a series made with Chet Baker in the mid-’60s (now available on such Prestige CDs as Stairway To The Stars and On A Misty Night, both of which contain the music from two LPs)-Coleman has no problem appreciating his own work, even as he looks for new projects. And when he occasionally listens to Maiden Voyage, he remembers the immediacy and excitement of the first rehearsal for the session.

“This was all new, all original music, and that stuff was complex; we rehearsed it the day before, but you’d forget it overnight. What I hear now is how great it came out for the time we had to do it. Everybody was reading the charts, reading the chord progressions, but the harmony made such great sense, and Herbie had written the music so well. Especially ‘Dolphin Dance;’ it was structurally kind of weird, with all those ‘slash’ chords [such as a B/C chord-written as B-slash-C], and you had to interpret that right off the bat. But we recorded no more than two takes of all that stuff.

“I recently played that tune for the first time in about 15 years, and in retrospect I think I probably couldn’t have done any better on it than I did then. Young minds.”

Today, the mind may be older but the fingers and heart remain young (thanks in no small part to the strong exercise regimen Coleman has followed since his 20s). It remains to be seen whether the familiarity of Richard Rodgers’ music can reach out to an audience that knows Coleman’s stylistic successors and inheritors better than they know Coleman himself. For now, he simmers steadily on the back burner, where the tastiest dishes so often lurk.

Guitarist Will Bernard bears the bittersweet blessing of virtuosic skill and eclectic taste, making his music a perpetual delight and yet hard to categorize. Maybe … END_OF_DOCUMENT_TOKEN_TO_BE_REPLACED

At 95, Chicago-based guitarist George Freeman is among the world’s oldest active jazz musicians. Although he came of musical age in the 1940s and counts … END_OF_DOCUMENT_TOKEN_TO_BE_REPLACED

When you’re on TV, everybody knows you, or at least thinks they know you. Take Kevin Eubanks, who was on NBC’s Tonight Show five nights … END_OF_DOCUMENT_TOKEN_TO_BE_REPLACED