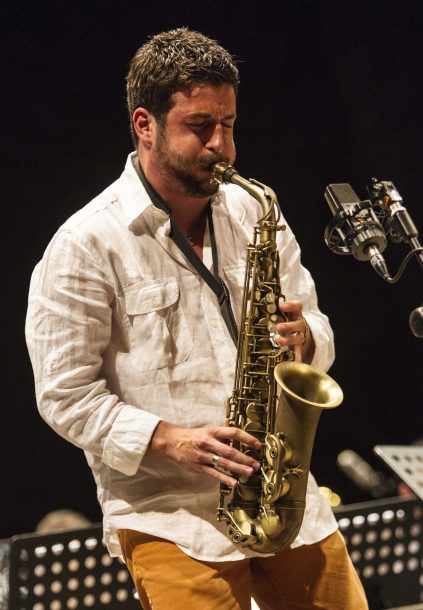 Child prodigies in jazz are most often pianists. But when Francesco Cafiso was 14, he was good enough on alto saxophone to tour Europe with Wynton Marsalis. In 2005, just after his 16th birthday, he made A Tribute to Charlie Parker with an Italian orchestra. He used the original arrangements from Parker’s two LPs with strings from 1950, but improvised new solos containing lines of flawless elegance, in wave upon wave. The project confirmed two things about Cafiso: He was a virtuoso and a conservative. By 2011, when he released Moody’n through Verve and was still playing (brilliant) bebop, some critics began to worry. In an art form that prioritizes innovation, Cafiso seemed to be mired in history.

After Moody’n, he went quiet. There were no new recordings, and he cut way back on his busy touring schedule. In 2014, word began to get out that Cafiso was up to something. Some of those who heard him at the Umbria Jazz Festival in July of that year were startled (and puzzled) by his new band, his new repertoire and his new saxophone language. By late 2015, with his appearance at the Belgrade Jazz Festival, and especially with the release of a new three-CD set, 3, it became clear that the old Cafiso was gone, and a new one was on the loose.

“The basis is introspection,” Cafiso, now 26, said in an interview in Belgrade. “I told myself to look inside. I had an urge to break with my past. For three years I almost quit performing. This period gave me new eyes to see every step in music: composing, arranging, improvising. 3 is kind of like a photograph of what I am now.” The project has been released in three versions: a regular three-CD pack; a lavish box with amenities including a beautiful 64-page hardcover book; and a “deluxe edition” adding vinyl LPs.

Cafiso has never been known as a composer, but 3 contains 29 new compositions. The music he has been performing in public for over a year comes from the second CD, La Banda. “I was inspired by a photo of Sicily taken by Luca Parmitano from the International Space Station,” Cafiso says. “It brought back emotions, images and sounds of my homeland.” La Banda is like no jazz that has been played before. There may be suggestions of Carla Bley, and Nino Rota’s circus music for Fellini films, and perhaps Charles Mingus. But marching down the middle of La Banda is a rowdy Sicilian street band. (The marching band is a foundation of Sicilian music.) The parade steps sound ethnic and unfamiliar in a jazz context, but the primal energy is infectious. When Cafiso catapults out of the ensemble, soaring then circling back to blast open the songs, there is no name for his passion but jazz.

In Belgrade, Cafiso played the music of La Banda with his quick, tight touring sextet. (Trombonist Humberto Amésquita and trumpeter Giovanni Amato are two names to remember.) On 3, he uses up to 17 instruments including cellos. Pieces like “Nocturne” and the two rapt versions of “Sicilia” reveal a surprisingly sure touch with narrative texture, from someone who had never before composed and arranged for large ensemble. But the first CD in the set, Contemplation, is even more unexpected. It was recorded in London with pianist Mauro Schiavone, bassist Linda Oh, drummer Marcus Gilmore and 33 members of the London Symphony Orchestra. In arrangements by Cafiso and Schiavone, themes expand, contract and evolve as they pass through sections of the ensemble. “Ingegno” and “Enigmatic Night” start as spare melodic centers and gradually become turmoil. It is a rush when Cafiso enters and injects his saxophone voice, rasping and keening, into the orchestra’s seething midst.

The last CD, 20 Cents Per Note, is the least unusual, a session for jazz quartet with Schiavone on piano, Marco Panascia on bass and Nasheet Waits on drums. Cafiso wrote nine diverse, dynamic new tunes. Here and throughout 3, it is striking how Cafiso’s saxophone playing has changed. He is no longer the orderly traditional improviser with the pretty, singing tone. His new freedom makes him wildly unpredictable. Thoughts are broken off and replaced as he leaps between deep honks and high cries, in intervallic jolts. He sometimes seems to treat the alto like a tenor, but he has said, “It is the spaces between the alto and the tenor that I’m after.” Cafiso’s new raw lyricism could only come from someone who spent his early years mastering the Charlie Parker aesthetic. It comes from deep within himself, yet he describes it in the practical terms of a working musician: “I got a new saxophone. I changed from a Selmer Mark VI to a Selmer Reference 54. The new saxophone is more rigid. It doesn’t respond immediately. In looking how to adjust my playing to this new instrument, I found my new sound.”

Child prodigies are rare. More rare are artists with the nerve to reinvent themselves.

In its near-century of excellence, The New Yorker has been home to more than its share of tops-in-their-field contributors. There’s E.B. White, with his luminous … END_OF_DOCUMENT_TOKEN_TO_BE_REPLACED

Put a “the” in front of a name and it acquires historical heft. The Thelonious Monk who entered New York City’s WOR Studios as Halloween … END_OF_DOCUMENT_TOKEN_TO_BE_REPLACED

On the enchanted evening of August 16, 1958, Ella Fitzgerald took to the stage of the legendary Hollywood Bowl. There, with a lustrous orchestra conducted … END_OF_DOCUMENT_TOKEN_TO_BE_REPLACED

Be careful what you wish for.  By the beginning of 2020 guitarist Mary Halvorson, one of the most acclaimed musicians of her generation, was also … END_OF_DOCUMENT_TOKEN_TO_BE_REPLACED