Skip to content
Become a member and get exclusive access to articles, live sessions and more!
Start Your Free Trial
Home > Features > Flip Phillips: Ever Green 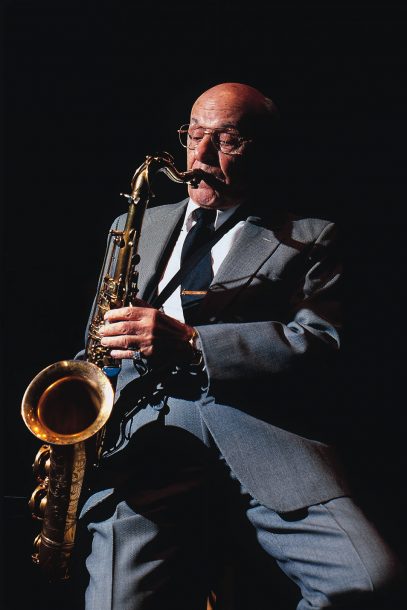 Whether Flip Phillips invented the expression or picked it up somewhere is hard to say, but in 1994 , commenting on his age, he said, “You learn not to buy any green bananas.” That pessimistic prognosis has proved unjustified. Phillips just passed his th birthday with all colors flying, and a new album, swing is the thing, to show for one of the most indefatigable spirits in jazz.

Swing Is the Thing features two guest tenor players, Joe Lovano and James Carter, and a dream rhythm section of guitarist Howard Alden, pianist Benny Green, bassist Christian McBride and drummer Kenny Washington. It does indeed swing, but more to the point, it contains some of Phillips’ gorgeous balladry, the big-shouldered big-toned kind of melodic sweep that is uniquely his.

Always one of the commanding tenor players, Phillips came to prominence with Woody Herman in the period of 1944 to 1946, what is usually called the First Herd, the fiery “Caldonia” band with Pete Candoli, Ralph Burns, Neal Hefti, Sonny Berman and other spirited players. Herman had been leading what at first was a co-operative band that recorded with Decca. Phillips was with the band that recorded for Columbia. Much has been made of the fact that it wasn’t really the First Herd, but that’s what it’s called, and arguing against is futile.

“My cousin, Frank Reda, gave me my first clarinet back in 1927,” Phillips says. “I studied with him for a while. He was a great saxophone and clarinet player, and I really looked up to him.”

Phillips played dates around Brooklyn, then in 1940 and ’41 worked with Frankie Newton Sextet at Kelly’s Stable in New York, after which he switched full time to tenor saxophone- “the most beautiful instrument in the world,” he calls it-and worked with Larry Bennett at the Hickory House. For a time he was with Russ Morgan’s band. But it was his work with Woody Herman that made Phillips a household name to the serious jazz fans.

He contributed more to that band than just great tenor solos; Phillips was a force within it. Ralph Burns remembers: “I wrote the introduction to ‘Apple Honey.’ Flip did the first part, Neal Hefti the bridge. It was a head arrangement, but it all came together.”

Phillips says, “‘Northwest Passage.’ Woody and I used to play that together. I’d show the saxes the lines. The trumpet would make something up; the trombones would make something up. It became a big arrangement. A lot of the tunes were made that way. All the riffs in the saxophones were mine. ‘Goosey Gander.’ All the sections would contribute, and when it came out, it was beautiful. There were nights it was just wonderful!”

The nickname Flip grew naturally, although it may have helped that he was a constant prankster. The whole Herman band was that way, encouraged in the wildness of their ways by their leader. And in Phillips’ case his natural ally and closest friend in the band was trombonist Bill Harris.

Harris’ practical jokes were notorious. At one time he acquired a store mannequin, a dummy he dressed up in a band uniform and seated beside him, holding a trombone. He would have arguments with that dummy, according to Phillips, shouting at it, “You come in when I come in!”

Phillips says, “When the trombone section would get up to play, Bill would kick the dummy and say, ‘Get up, get up!’ And it would just sit there.

“But the biggest thing with that, I was part of. We were in Detroit. And Bill and I were on the fifteenth floor of the hotel, holding the dummy in a window. The dummy was trying to commit suicide. And Sonny Berman was down on the street. The street filled up with people, yelling, ‘Stop, don’t do it.’ And Bill and I were holding him back.

“Well, we threw him out the window. You should have heard the screams. When he came down, Bam! Sonny Berman picked him up and took him into the hotel. The fire department came, the police came, and we split. That band did crazy things like that.”

But its time was ending. Indeed, the entire big-band era was ending, and in December of 1946, eight of the bands, including those of Benny Goodman, Harry James and Woody Herman, broke up. But a new format for jazz was developing, primarily on the initiative of Norman Granz: the touring jazz concert, presenting the music in small groups (the jazz festival still lay in the future). Phillips, along with Harris, became one of the regulars with Granz’s Jazz at the Philharmonic. He toured America and Europe with JATP through 1957, worked with the Gene Krupa Trio, and with the Benny Goodman band.

Phillips and Harris both decided to settle in Florida, where they co-led a group that, while little known nationally, was, according to Phillips, one of the best groups he ever played in. Phillips took residence in Pompano Beach, Fla., where he still lives.

“The group Bill and I had was wonderful,” Phillips says, “but it lasted only a year. Bill got cancer.” Harris died in 1973.

For a time Phillips was semi-invisible. He managed an apartment house, played only part-time, and seemed to be on his way to being forgotten. Then in 1970, he made an appearance at the Colorado Jazz Party, the first of many. This was followed by other festival appearances and a Woody Herman alumni performance at the Newport Jazz Festival in New York in 1972. He returned to playing full-time in 1976, and hasn’t been absent from the scene since then. He has been a regular on the Floating Jazz Festival cruises on the S.S. Norway.

Phillips met his second wife, Miyoko, in Japan. “We call her Miki. I was touring there with Jazz at the Philharmonic in Japan in 1953. She came to this country in 1954, and she saw me play in 1977.

“My first wife had Alzheimer’s, and that’s worse than cancer or leprosy. It’s the meanest of all ailments, and there’s nothing you can do about it. Miki helped take care of her. My [first] wife loved her. Finally I had to put my wife in a home and she died, and, later on, Miki and I married. She’s a wonderful woman.

“She thinks this [new] album is the best thing I’ve ever done.”

Howard Alden says: “Flip is one of my mentors. He sets such an example of playing 150 percent, all of the time, and that record date was no exception. No compromises, no apologies for what he’s doing. He just plays his heart out. It was a thrill to be on this date with him.

“I first played with him on some of the early jazz cruises on the S.S. Norway. I got to play with him a lot on those cruises, and got to know him quite well. I played a gig in Chicago with him for a week, and I’d go by his room every day and learn his lines.

“And the rhythm section on this new album was a real treat. Kenny Washington I’d played with a few times before and he was just wonderful. Benny Green was so great on piano, so perceptive and concerned with whether he was playing the right things for Flip. Of course, all he had to do was just play. It’s the way Flip is.”

I have a five-disc player and I just hit random and whatever comes up comes up. But I usually play anything by Andrés Segovia. And Art Tatum-everything.

Phillips has played the same Selmer Balanced Action tenor sax since 1939. He uses an Otto Link #8 mouthpiece with a Rico Royal #3 reed.

Flip Phillips’ 85th was celebrated in style at The March of Jazz 2000, sixth in the series of annual jazz parties hosted in Clearwater, Fla., by the enterprising Arbors Records label and its president, Mat Domber, who wisely lets the musicians (in this case, Phillips) make the artistic decisions. Listing even a portion of the cast suffices to show what stuff this party was made of: Trumpeters Jon-Erik Kellso, Randy Sandke, Jack Sheldon, Clark Terry, Joe Wilder; reedmen Kenny Davern, Ken Peplowski, Bob Wilber, Phil Woods; pianist Dave McKenna; guitarist Howard Alden; bassists Jay Leonhart, Michael Moore; and drummer Butch Miles. The all-female quintet Five Play performed as a unit, but its members were also deployed individually, while the Yoichi Kimura Trio from Japan made just a single appearance. Honored non-playing guests were Billy Bauer, Milt Hinton (to whom the assembled bassists paid tribute and were rewarded by a brief speech by Milt and a chorus of “Old Man Time”) and Jerry Jerome, temporarily sidelined by a recent operation.

Everyone was there for Phillips-Alden and Miles, on tour with a History of Jazz package and the Basie band, respectively, took leave to participate- and the sets involving the birthday boy had a special glow, not least the saxophone party on the final Sunday afternoon, on which he uncorked a solo on “Jumpin’ at the Woodside” that was the essence of vintage Flip. Then Five Play saxophonist Anat Cohen knocked everybody out with a gutsy, swinging tenor turn, while fellow Five Play reedist Karolina Strassmayer demonstrated why Woods (a brick throughout) joked he would break her fingers. The trumpet party, organized by champion sit-down comic Sheldon, was special: he made everyone play and sing the blues, and while this yielded no vocal surprises from himself and Terry (who earlier played a deeply moving slow sixteen bars on “I Can’t Get Started”), it was special kicks to hear spontaneous warbling from Kellso, Sandke and Wilder(!), who also played some lovely flugelhorn.

One could go on and on, citing McKenna’s unique swing, Leonhart’s very special ode to Hinton, Wilber’s “Hommage à Sidney Bechet,” Davern’s “Wabash Blues,” Parrott’s intonation and swing, Moore’s “Lotus Blossom” and Alden’s “See You in My Dreams.” But it would be positively sinful to omit the Alden-Peplowski Duo’s “Panama,” a truly remarkable demonstration of chops and creativity. In all, a party that did justice to its celebrant, affirming the joy in making swinging music his name has always stood for.

Tenor saxophonist Julieta Eugenio was recently reminded of the distinct pleasure one can derive from masters of her chosen instrument. While cooking at home and … END_OF_DOCUMENT_TOKEN_TO_BE_REPLACED

Everything about Israeli-born tenor and soprano saxophonist Eli Degibri is a celebration. You can hear that in his sideman gigs with Herbie Hancock and Al … END_OF_DOCUMENT_TOKEN_TO_BE_REPLACED

It’s a cold March Friday night in New York City, but the crowd inside the Village Vanguard crackles with warmth as it engages with the … END_OF_DOCUMENT_TOKEN_TO_BE_REPLACED

When you hear tenor saxophonist Mark Turner’s name in conversation, it seems to be frequently linked to the notions of mindfulness, precision, and fastidiousness. “That … END_OF_DOCUMENT_TOKEN_TO_BE_REPLACED