Skip to content
Become a member and get exclusive access to articles, live sessions and more!
Start Your Free Trial
Home > Features > Fight the Big Bull: An American Band 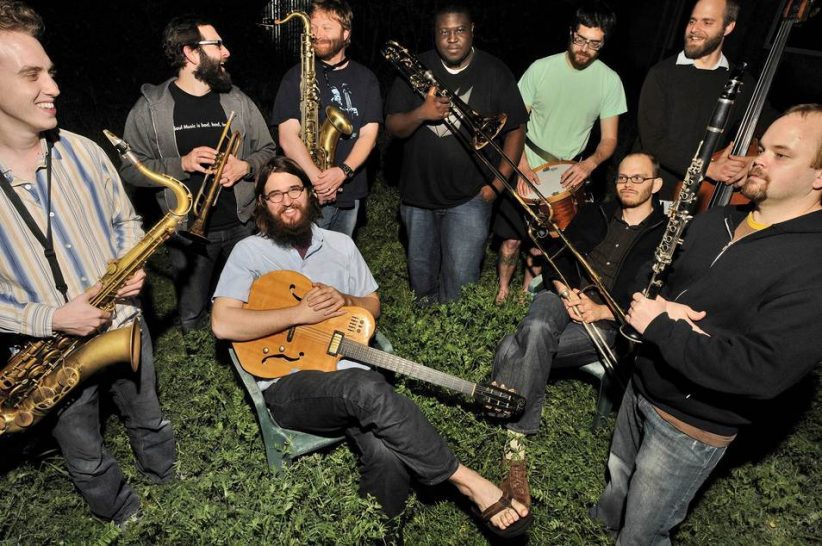 Leading a 10-piece ensemble that incorporates swing, rock, folk and free jazz in Richmond, Va., admits composer-guitarist Matt White, “can be like creating music in a vacuum.” So when Fight the Big Bull’s debut CD, Dying Will Be Easy, began to garner accolades, White and his bandmates felt they’d proved a point. “I wouldn’t say we have a chip on our shoulder,” White says, “but we’re here, we’re creating music, and we’re confident that what we’re doing is unique. I think that’s really kept people together.”

Originally intended to be a demo, Dying Will Be Easy caught the ear not only of Clean Feed Records, who released it in 2008, but of two of White’s biggest influences: saxophonist Ken Vandermark and slide trumpeter Steven Bernstein, both of whom have gone on to collaborate with the band. Bernstein, in fact, performs and contributes two compositions and an arrangement of the Band’s “Jemima Surrender” to Fight the Big Bull’s second album for Clean Feed, All Is Gladness in the Kingdom. “His music is really inspired by my music, but it’s also inspired by many of the things that inspired me,” Bernstein says. The two met when White, freshly graduated from Virginia Commonwealth University, e-mailed Bernstein and received a terse reply: “Call me.”

“I’m not a big typer,” Bernstein laughs, but he saw something special in the younger composer’s work. “Music schools are putting out kids every day who have knowledge but don’t have that extra thing. This guy already has whatever that mysterious thing is, the magic part of music.”

As for the shared inspirations that Bernstein speaks of, White rattles off an extensive and wide-ranging list. “All this music that comes out of the blues and the African-American folk traditions is a huge influence on me,” he says. “Blues music, gospel music, the New Orleans traditions, both the first wave of New Orleans jazz and early R&B, proto-funk music. Reggae is a big influence even though that’s probably a pretty buried reference point.”

He continues to trace a lifeline of influences leading through Duke Ellington to Carla Bley to the Band and beyond: “Growing up I listened to Chuck Berry and the Beach Boys constantly. In a way, I feel like Fight the Big Bull is a really avant-garde version of Chuck Berry and the Beach Boys. That might sound weird, but in my mind I can hear that, a very blues-based music with big arrangements and kind of fucked up.”

As a 27-year-old guitarist, it’s not surprising that White looks toward rock music even while working in a jazz milieu. “I was reading this interview with Duke Ellington,” he recalls, “and he talked about swing music being the music of his youth and how much that really pumps him up, and I feel that way about a handful of rock music. That’s the music I grew up on and I think it’s important to embrace that and not try to fake like swing or bebop or whatever was the music that really informed my early development, because it wasn’t.”

Those influences are also bearing fruit in collaborations that White and FTBB are undertaking with their peers. The band recently recorded I Mean to Live Here Still, a collaboration with San Francisco-based singer-songwriter David Karsten Daniels, and this fall will undertake a recording and performance series with experimental indie-rockers Megafaun and Bon Iver. “I met those guys playing in rock bands up and down the East Coast,” White says. “There were probably 15 people at the show and no one knew who either of us was, and now [Bon Iver frontman] Justin Vernon is a global indie-rock icon. Megafaun are expat jazz kids who play weird Americana indie-rock free jazz, which is almost what we do, but on different sides of the spectrum. So it’s been really natural. I can bridge the cultural gap, because I can just hang out with those guys and have a great time, but I can also be really nerdy about horn scores.”

“I knew Matt through an earlier project,” says David Karsten Daniels, “but when I heard his new band I immediately had the feeling of wanting desperately to make a record with this group of musicians I heard playing so powerfully-sounding so dirty and alive. I think that Fight the Big Bull, while able to be very exacting and subtle, have a unique ability to tap into something very animalistic.”

Expanding beyond the core of FTBB, White envisions starting his own record label centered around a house band, producer, arranger and songwriters, but with a diverse array of styles. He sees the band’s position in Richmond, away from the larger meccas of jazz and rock music, as akin to the Memphis sound of Stax Records, or the Muscle Shoals Studio in Alabama, beacons for artists who wanted to tap into their specific regional sounds. “I think we have that a little bit,” White says, “a unique aesthetic where people are coming to us with cool projects. I like what we have going on here. I can’t speak for my whole future, but right now I think there’s enough positive momentum and things really happening here that I’m committed to staying for the foreseeable future.”

In its near-century of excellence, The New Yorker has been home to more than its share of tops-in-their-field contributors. There’s E.B. White, with his luminous … END_OF_DOCUMENT_TOKEN_TO_BE_REPLACED

Put a “the” in front of a name and it acquires historical heft. The Thelonious Monk who entered New York City’s WOR Studios as Halloween … END_OF_DOCUMENT_TOKEN_TO_BE_REPLACED

On the enchanted evening of August 16, 1958, Ella Fitzgerald took to the stage of the legendary Hollywood Bowl. There, with a lustrous orchestra conducted … END_OF_DOCUMENT_TOKEN_TO_BE_REPLACED

Be careful what you wish for.  By the beginning of 2020 guitarist Mary Halvorson, one of the most acclaimed musicians of her generation, was also … END_OF_DOCUMENT_TOKEN_TO_BE_REPLACED