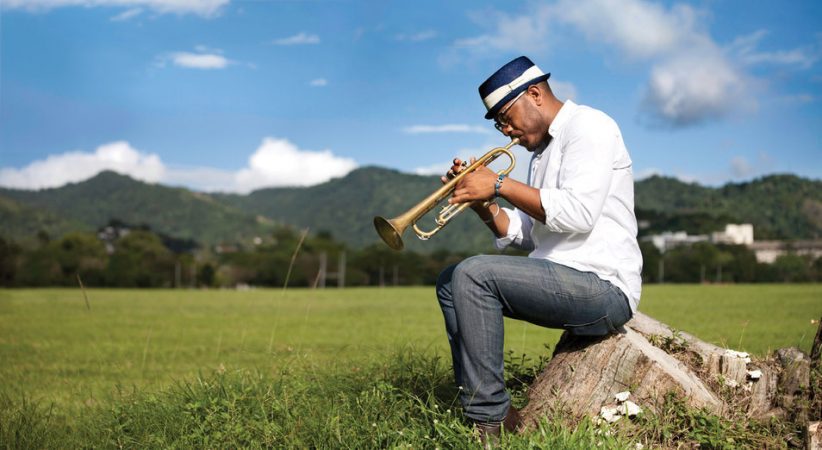 Nobody would call Port of Spain, Trinidad, to Lansing, Mich., a classic path to jazz stardom, but Etienne Charles has turned that journey into an exceptionally rewarding one. He didn’t know a lick of jazz when he came to the States to attend Florida State University and now, at age 30, is an acclaimed jazz trumpeter and jazz faculty member at Michigan State University.

“It is a bit strange, being in Michigan,” Charles said before a benefit performance at Chicago’s Logan Center for the Arts, a spiffy new facility near the University of Chicago. “Where I grew up, it’s hot all year. People are always trying to dance there, so the music dances. In Michigan, it’s a bit cold and gray, but being in the Midwest has forced me to grow outside of everything I know, culturally.”

That’s saying something. The personable Charles, who spends part of the year in New York-he lives not in the city, but Hempstead, Long Island-is one of jazz’s great cosmopolitan travelers. On his acclaimed fourth album, Creole Soul, he treats jazz to an amazing range of ethnic styles. Without missing a bop or rocksteady beat, he ranges from Monk to the Mighty Sparrow, from the Jamaican reggae of Bob Marley’s “Turn Your Lights Down Low” to the Haitian Creole of the Dawn Penn hit “You Don’t Love Me (No, No, No).”

Charles’ half-dozen originals are equally varied, reflecting an uncommon ease not only in blending sounds but also making them his own. “My mentor, Marcus Roberts, told me to put every aspect of my life into my music,” he said. “I don’t worry as much as I once did of what people think Caribbean jazz is supposed to be.”

Roberts, who taught Charles at Florida State, marvels at his protégé’s global vision: “For his age, he has a rare gift for knowing what his roots are while still being interested in seemingly unrelated things. He uses fresh harmonies and modern jazz techniques to give his folk vision new meaning and identity.”

“I was like Marcus’ valet, his assistant-I followed him everywhere,” said Charles, who also attended the Juilliard School of Music and the Henry Mancini Institute. “When I completed an assignment to write a suite of music, he said we should record it. I said, ‘We?'”

The result was Charles’ debut, Culture Shock, featuring Roberts on piano. It was released in 2006, the year he also won the National Trumpet Competition. Folklore Kaiso and Creole Soul followed, all on his own label. The albums feature a recurring cast of players including saxophonist Jacques Schwarz-Bart and a pair of Thelonious Monk Competition winners, pianist Kris Bowers and bassist Ben Williams.

Charles’ great-grandfather and grandfather were folk musicians, the latter specializing in parang on the cuatro, a lute-size guitar. His father, a land surveyor and United Nations commissioner, deejayed and played steel drums in the popular Phase II Pan Groove Orchestra. At 10, Etienne received his first trumpet from a Toronto uncle who played saxophone. At 12, having already started playing horn in his own groups, he performed alongside his father in Phase II at carnivals. The steel band’s leader, “Boogsie” Sharpe, who played with Monty Alexander, provided a link to the great Jamaican jazz pianist, who mentored Charles.

Charles also became exceptionally close with noted Trinidadian-American percussionist Ralph McDonald, whom he met in Roberta Flack’s band and who played on two of his albums before his death in 2011.

But it wasn’t until he moved to Florida that Charles was exposed to serious jazz. “The only jazz played on Trinidad radio in the ’80s and ’90s was by people like Kenny G and Peter White,” he said. “The first time I heard Lee Morgan’s solo on ‘Blue Train,’ it was like, shit, this is it! After that, I listened to Clifford and Freddie and Wynton … not only their playing but also how they wrote.

“Jazz will always be about bringing a new sound to the people,” said Charles, who at the conclusion of his Chicago set brought out his brand new four-string banjo, which tunes like a cuatro. “I’d never played it before,” he said, but like everything else in the concert, it made an entertaining connection between where he once was and where he is going.

Guitarist Will Bernard bears the bittersweet blessing of virtuosic skill and eclectic taste, making his music a perpetual delight and yet hard to categorize. Maybe … END_OF_DOCUMENT_TOKEN_TO_BE_REPLACED

At 95, Chicago-based guitarist George Freeman is among the world’s oldest active jazz musicians. Although he came of musical age in the 1940s and counts … END_OF_DOCUMENT_TOKEN_TO_BE_REPLACED

When you’re on TV, everybody knows you, or at least thinks they know you. Take Kevin Eubanks, who was on NBC’s Tonight Show five nights … END_OF_DOCUMENT_TOKEN_TO_BE_REPLACED