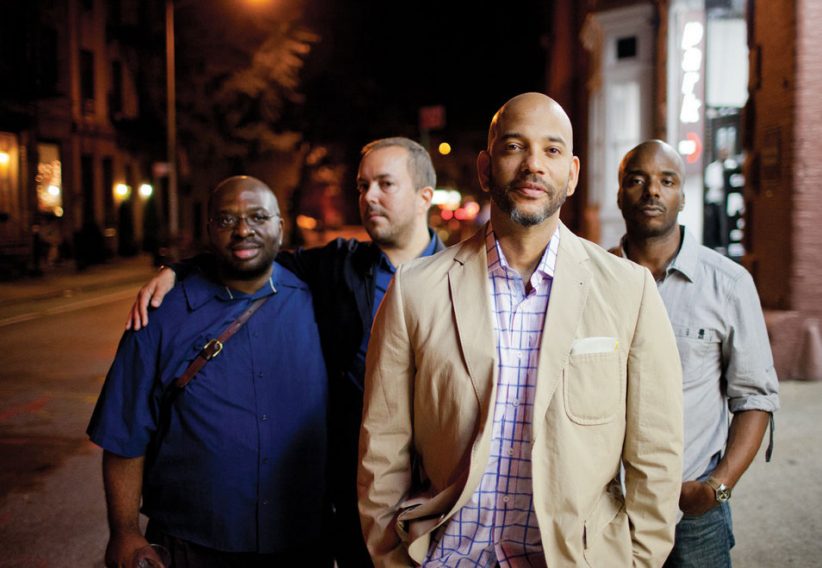 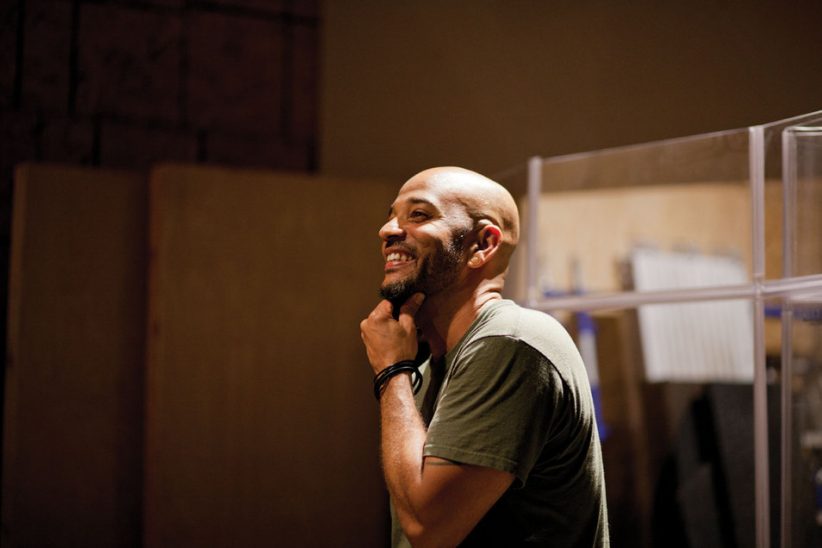 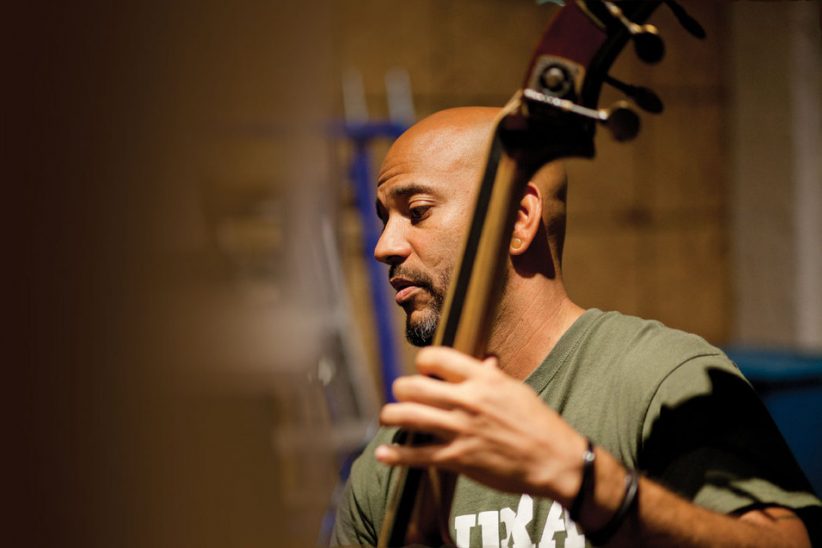 “The thing that Eric Revis has, that he plays with, I don’t know if it can be acquired,” says saxophonist Branford Marsalis, whose renowned quartet features the bassist. “It’s not so much a big sound, it’s a big beat. He plays with a certain kind of physical authority you don’t find very often anymore.”

That idea of “physical authority” in music seems abstract until a few nights later, when Revis takes the stage at Manhattan’s Jazz Standard as part of the Kurt Rosenwinkel Quartet. A tall, fit man wearing a gray suit jacket over a plaid shirt, Revis plays a single note to introduce the opening number. It thumps in the ear, but with nowhere near the impact it makes in the chest and stomach. That impact doesn’t recede throughout the set, even when the full ensemble is playing. Rosenwinkel’s is a virtuoso group, including pianist Aaron Parks and drummer Kendrick Scott in addition to the leader, arguably the most acclaimed guitarist of his generation. Revis takes a backseat to none of them. Their playing is sublime; his is palpable.

For the bassist, it’s a no-brainer. “All good bass players that I like have had that thing-electric bass players, double-bass players, they all had that,” Revis says. “Wilbur Ware, Jimmy Blanton, those guys attracted the shit out of me! And throughout the whole pantheon of the music: Check out William Parker, Peter Kowald. They all just had those big sounds, man.”

Still, it has made Revis, who now lives in Los Angeles, a reigning hero of the bass. “When I play with him in my band, all the other bass players I know come out to hear him,” says Bill McHenry, another of Revis’ employers. “All these young guys I know who are great bass players in New York are there; all the old guys love him. It’s not uncommon, in my group, for his solo to get more applause than any other solo.”

That Revis is a member of all three of these bands is telling. Marsalis and Rosenwinkel, though they’ve been known to experiment, all but epitomize mainstream jazz in the 21st century. McHenry has a much looser conception, likely to turn from a romantic ballad to a sprawling free improvisation, then back to a hard swinger. Revis has the same approach. In addition to his sideman work, he co-leads Tarbaby, an adventurous collective with pianist Orrin Evans and drummer Nasheet Waits, and helms a free trio with pianist Kris Davis and drummer Andrew Cyrille. As a bandleader, Revis’ new effort is In Memory of Things Yet Seen (Clean Feed), featuring a quartet well versed in the avant-garde: McHenry on tenor saxophone, Darius Jones on alto and drummer/vibraphonist Chad Taylor. (Marsalis guests on two tracks.)

An uninitiated listener could easily view his career in binary terms: “in” sideman, “out” leader. But of course Revis applies more nuance than that, and threads it all together with his visceral bass rhythms. “I think the whole goal is to really acknowledge the universality of all music, all things,” he says.

Born in Los Angeles in 1967, Revis grew up in Fresno, Calif. His wasn’t a musical family, though he recalls music being all around him as a child-enough to make him want to play. He started on guitar but by 13 had switched to bass; this, he says, came after seeing the cover of the first album by R&B group A Taste of Honey, which featured co-leaders Hazel Payne and Janice Marie Johnson, the latter standing with her bass. “These beautiful women, all around the bass. … I was like, ‘Bass, yeah, bass,'” he laughs.

During Revis’ senior year of high school, his family moved to San Antonio, Texas, where he began working regularly in an alternative rock band. One of his bandmates had spent time in Japan and amassed a gigantic record collection there. “Every week he would give me just a pile of records,” Revis says, “and jazz kind of stuck.” He wasn’t separating the music by style; Miles Davis and Kenny Dorham came along with Ornette Coleman and the AACM. “I really identified with everything,” he recalls. “So it was the music that kind of found me.”

By this time Revis had tried college-“several colleges,” he says with a grin-but when he heard in 1990 about Ellis Marsalis’ program at the University of New Orleans, he decided to give it another go. This time higher education took; Revis studied with Marsalis, graduated in 1993 and moved to New York soon after. Within a few months in the city, he was working with singer Betty Carter, whose band was one of the most prestigious training grounds for young musicians-and one of the most difficult. “Her thing was, ‘When you leave here, you’ll be a better musician. And you may be a better person.’ What you didn’t realize was that the statement meant she was gonna fuck with you like you couldn’t believe,” Revis recalls. “But when I look back on it, she was like a grandmother or an elder who was very hard on you, but in a very discerning way. She was special, man.”

After two years with Carter, Revis moved on to stints with veterans Lionel Hampton and Billy Harper, as well as younger players like saxophonist Sherman Irby and trumpeter Russell Gunn. In 1996 Gunn, with whom Revis had come to New York from New Orleans, recommended the bassist to Marsalis. Revis joined his electric Buckshot LeFonque project, which worked out so well that Marsalis asked Revis to join his re-formed quartet with pianist Kenny Kirkland and drummer Jeff “Tain” Watts. In 2014, the bassist is the only one of those musicians who’s still in the band.

He started working with Rosenwinkel in 2003, when the guitarist formed his trio with drummer Jeff Ballard and toured Europe, and joined his quartet in 2011. “Kurt’s definitely a kindred spirit,” says Revis.

Indeed, Revis has reached the point with these bands-especially Marsalis’-where they are no longer groups of colleagues. “Now, it’s more about family,” he says. “Having been in the band for so long, and having at certain times lived with these people-you’re out on the road, this is your family.”

Guitarist Will Bernard bears the bittersweet blessing of virtuosic skill and eclectic taste, making his music a perpetual delight and yet hard to categorize. Maybe … END_OF_DOCUMENT_TOKEN_TO_BE_REPLACED

At 95, Chicago-based guitarist George Freeman is among the world’s oldest active jazz musicians. Although he came of musical age in the 1940s and counts … END_OF_DOCUMENT_TOKEN_TO_BE_REPLACED

When you’re on TV, everybody knows you, or at least thinks they know you. Take Kevin Eubanks, who was on NBC’s Tonight Show five nights … END_OF_DOCUMENT_TOKEN_TO_BE_REPLACED