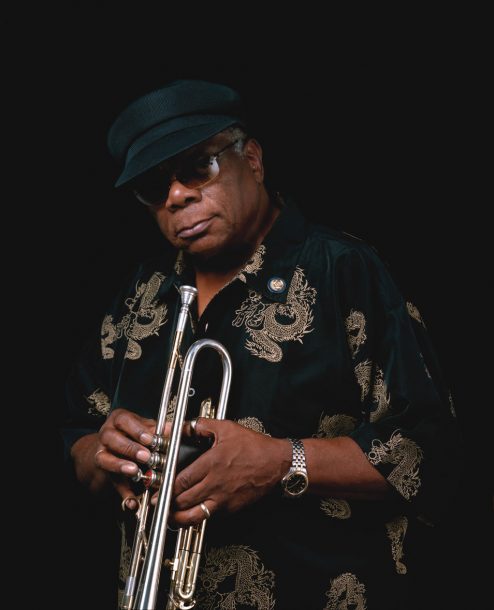 In the summer of 1958, a freelance photographer named Art Kane, on his first-ever photo assignment for Esquire, assembled 57 jazz musicians in front of a Harlem brownstone along 126th Street for a photo commemorating the golden age of jazz.

As historically associated with Harlem as the picture has become, Eddie Gale believes the photo could just as easily have been taken across town in the Brooklyn neighborhood where he grew up.

“People always talk about Harlem being such an amazing place during that time and it truly was, but Brooklyn was also an incredible place to live during that era,” says Gale, the avant-garde trumpeter whose passionate playing has been featured on recordings and performances by Sun Ra’s Arkestra, Cecil Taylor and Larry Young, as well as a pair of underappreciated LPs he cut as a bandleader for Blue Note at the end of the ’60s.

“People like Jackie McLean, Max Roach, Sonny Rollins, Cecil Payne and Randy Weston were in the neighborhood. Bud Powell lived around the corner from me. I used to go out as a kid to shine shoes and see movie stars coming through the Baby Grand Club. That was where I first saw Lena Horne and Louis Armstrong. I will never forget hearing Lester Young wailing from outside of the Club Continental on Ocean Avenue, not far from where I lived. Seeing people like these artists in my own neighborhood was an impressive thing to me as a kid.”

Gale got his start in music early, inspired initially by the music he heard in church and at home. “The first thing that really impressed me was vocals. Hearing people sing in the church, as well as my mom walking around the house humming music, were my first impressions of music. The Soul Stirrers, the Five Blind Boys of Mississippi and B.B. King were favorites around my family,” Gale remembers. “As I got a little older, I enjoyed going to the movies on Saturdays and listening to the beautiful soundtracks. I think that really shaped me with the idea of composing music.”

At 8 years old, Gale joined Troop 219 of the Cub Scouts in Brooklyn and began playing bugle. “Playing the bugle in the marching band inspired me to pick up the horn, so I started getting lessons on the trumpet from Kenny Dorham when I was 17 or 18 years old,” Gale says. “As I got older, I started learning from these other musicians in my neighborhood by sitting in with them. I’ll never forget sitting in with Sonny Stitt one time and he turned to me and said, ‘Son, go home and learn how to play slow.’ I remember wondering how Sonny Stitt could tell me to play slow. He played like Bird with all those fast notes, but I figured he knew better than me, so I went home and learned how to play slow.”

Coming of age as a musician in the late ’50s and early ’60s, Gale was influenced heavily by both the bebop and hard bop of the past and the rise of avant-garde jazz. “Most of the scene then in Brooklyn was heavy bebop and so a lot of the community musicians who were jamming wanted to stay within the changes,” Gale recalls. “I kept telling them that I was hearing ‘the thing.’ I wasn’t just hearing the changes or the melodies; there were other things that were happening. So when I heard people like Coltrane and Sun Ra for the first time, I knew that’s the music I wanted to play.”

In the early ’60s, drummer Scoby Stroman, a close friend of Gale’s who was working with Babatunde Olatunji, introduced the trumpeter to Sun Ra. The free-jazz legend had just arrived in New York City from Chicago, where he had begun experimenting with electric keyboards in his big band. “I learned a lot from Sun Ra about how important the imagination is in our development,” Gale explains. “Exercising your imagination is a very important thing. Sonny [Sun Ra was born “Sonny” Blount] also believed in discipline. Having discipline as a musician and a person was important to him. I was straw boss on a couple of occasions and there was this one time this young guitar player was going through some problems and his discipline wasn’t satisfying Sun Ra. So Sonny told me to go pay him not to play that night. I’ll never forget that. All these experiences were important to me, as well as being with a musician who I respected and who played a type of music that I really enjoyed.”

Not only was playing with Ra influential but Gale was part of a horn section that included long-time Arkestra members and legendary saxmen John Gilmore, Marshall Allen and Pat Patrick. “Those guys influenced me a lot early on,” Gale says. “When I started out, Sun Ra had me play onstage next him at the piano. As the years went on, I’d try to sneak over and get with the rest of those cats and they’d be like, ‘No, no, no, you know you belong back over there with Sonny.’ He had your spot and you were gonna play whatever he wanted you to play! Years later, I did a tour with them in ’79 and got a chance to play with everybody else in the horn section. But they made me carry the music!”

Gilmore wasn’t the only tenor saxophonist that heavily influenced Gale. An early love for John Coltrane’s music led a precocious, young Gale to the Half Note to request a sit-in with his idol. “We walked in and the place was packed. John was just doing it onstage and musicians were lined up on the side—Pharoah Sanders, Rashied Ali, Don Cherry, Alan Shorter—waiting for a chance to sit in,” Gale recalls. “So when he finished his set, I walked over to where he was standing at the bar and said, ‘Mr. Coltrane, I came over from Brooklyn and I would like to sit in and play with you.’ John looked around and saw the other cats and said, ‘Well, I don’t know, there are a lot of musicians here tonight.’ So I thanked him and turned to walk away and he said, ‘All right, wait a minute, wait a minute.’ I was the last one to get to sit in that night. It was one of the most amazing moments in my life. I’ll never forget it. We became friends from that point on. One time, I needed my horn out of the pawnshop so I called John. He had me come up to Birdland and gave me the $35 I needed to get my horn. I told him, ‘John, I will pay you back,’ and he said, ‘Just keep playing and never stop playing the way you play.’ He was like an uncle or father figure to me and I cried when he passed. It really hit me that hard.”

Following two sideman gigs in 1966 on Cecil Taylor’s Unit Structures and Larry Young’s Of Love and Peace, Gale was tapped by Blue Note co-founder Francis Wolff to record two albums as a bandleader. 1968’s Ghetto Music and ’69’s Black Rhythm Happening combined the marching-band rhythms and gospel music of Gale’s youth, the hard bop and bebop of his predecessors, the avant-garde liberalism of Sun Ra and Cecil Taylor and the soul-jazz sanctity of Larry Young.

“I wanted to mix my love of vocals with my love of jazz,” the trumpeter says. “At that point, I didn’t know of anyone who was playing with two drummers and two bassists. It just made sense to have this action going on from my love of African music and my time back in the marching band in Brooklyn. But playing with Larry Young on Of Love and Peace also influenced it a lot. Larry’s organ playing really took me back to my roots in the church.”

Shortly after the release of his second Blue Note LP, Gale returned to Brooklyn to play a concert at his junior high school. The experience was life-changing.

“I found that I really enjoyed teaching young people about jazz,” Gale explains. “I received a lot of help from some great musicians early on in my life, so it felt good to share that same experience.”

Following the end of his contract with Blue Note, Gale moved to Palo Alto, Calif., to continue working with students as an artist-in-residence at Stanford University. In 1972, he moved to San Jose and was subsequently named that city’s official Ambassador of Jazz by Mayor Norm Mineta. Over the course of more than 30 years living in San José, Gale has worked with Music in Our Schools, organized the Evergreen Youth Adult Jazz Society, the We’re Jazzed! Youth/Adult Jazz Festival and the annual Concert for World Peace and Peace Poetry Contest at San José State University.

“I put together what I call the Inner Peace Orchestra because the music we do for the Concert for World Peace is more dedicated to meditation and relaxation. We try to entice people to really take their time to embrace world peace,” he says. “We also ask that the audience bring nonperishable foods for the Second Harvest Food Bank because we do not charge people for the concert. We’ve been doing it for more than 10 years now and it’s one of my favorite things to do in life. I believe that world peace, as well as our own inner peace, are the secrets to all success in our lives.”

In 2001, Gale received the Sankofa Award for his 25 years of service from the California Arts Council. In 2006, the American Institute for Public Service and CBS 5 in San José bestowed on Gale the prestigious Jefferson Award for the trumpeter’s tireless work to promote the arts and selfless commitment to mentoring area youth.

While the majority of his time is spent on his various charitable activities, Gale has not retired from public performances or studio recording. In addition to the various charity and benefit concerts he participates in, Gale and his all-star band played the San José Jazz Festival for the last two years.

“While we were talking about reissuing those albums, Pat was telling me about what Mushroom was doing and asked when we could jam. So I started hanging out and jamming on things and having a good time. The next thing I know, the record’s done. I had a nice time with those cats. They took a little information from me and I took a little inspiration from them. They were very creative to work with. I think two songs on the album are my originals, but other than those, we all contributed to the music. We had a good time and that is what I think music is all about, invoking the good spirits of peace and love in each other and in the audience.”

OK, that’s funny, but it also implies a problem. People who dismiss the accordion as soon as they hear it, as soon as it triggers … END_OF_DOCUMENT_TOKEN_TO_BE_REPLACED