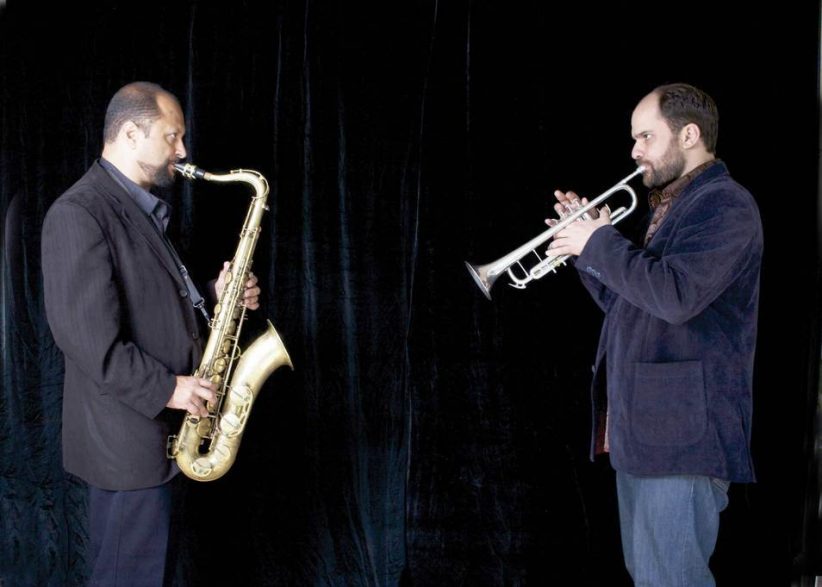 It may sound like a cliché, but Amir ElSaffar and Hafez Modirzadeh truly were destined to make music together. Although they are years apart in age-tenor saxophonist Modirzadeh was born in North Carolina in 1962, trumpeter ElSaffar near Chicago in 1977-they share parallel cultural roots and artistic histories that were bound to cross paths sooner or later. On Radif Suite (Pi), their new collaboration that also features bassist Mark Dresser and drummer Alex Cline, they now have.

Both ElSaffar and Modirzadeh are steeped in the musical traditions of the lands in which their fathers were born: Iraq and Iran, respectively. Although both musicians grew up in the United States-and were born to mothers from New York-they have heavily invested in the study of Middle Eastern modalities and how they can be applied to jazz. When they finally met in late 2008, and subsequently began working together, a sense of inevitability was already in place. “It was more than just, ‘You play Persian music and I play Iraqi music,'” says ElSaffar, who now lives in Brooklyn. “It was about each of our dispositions as human beings, each of our desires to stretch beyond the norms and the conventions of tradition [and find] something new through this tradition.”

Those traditions, specifically, are Iraqi maqam and Persian dastgah. “They’re very closely related, the maqam and the dastgah,” explains Modirzadeh, calling from San Jose, Calif., where he has lived for some three decades. “Maqam is a general term for a modal system of the Near and Middle Eastern and Central Asian region, all those countries. The maqam is close to the Persian dastgah because those people developed their cultures alongside each other.”

“Western music,” ElSaffar further elucidates, “uses equal temperament, so there are 12 notes in the octave and other sounds don’t get accounted for. There’s no such thing as a note between E and F, or F and F-sharp. You can compensate a little bit for the intonation but they’re still just called E and F and there are still 12 distinct tones. Maqam music in general has 24 distinct tones within an octave, but it’s also relating to a fixed tonic, and then everything kind of relates to that tonic in some sense. But even though you have 24 named notes, any given scale is still a seven-note scale. What happens with Arabic music is there’s a flexibility of pitch. It could be higher, it could be lower, and there’s much more room for emotional content.”

Understanding the theories at work on Radif Suite-which includes eight compositions by ElSaffar and eight by Modirzadeh-takes some effort for the non-musician. But appreciating and enjoying the result of this alliance does not: Despite its use of microtonal intervals and other non-Western concepts, the music is surprisingly accessible, at times reminiscent of the classic Ornette Coleman Quartet, albeit with a Middle Eastern flavor. “What we’re doing, we want it to be beyond system,” says Modirzadeh. “When I talk about my system, I just mean it helped to liberate me, like harmolodics helped liberate Ornette and chromatics helped liberate George Russell. But the main thing is that out of these systems-maqam, dastgah-our musical impetus is deeply rooted in our personal relationships with our friends and family and with people. It’s not an abstract theory.”

“There’s a sense of liberating from tradition [in this music],” adds ElSaffar. “I don’t think it’s necessary to have prior knowledge [of the theories being employed]. People who have heard the music without background have responded really strongly to it. But like any music, the more you learn about it the more you can appreciate its subtleties.”

Modirzadeh and ElSaffar had been aware of each other long before they actually met and played together for the first time. ElSaffar had heard Modirzadeh’s 1992 album In Chromodal Discourse, and Modirzadeh was familiar with ElSaffar’s 2007 release Two Rivers, for which the trumpeter spent time in Iraq absorbing the music first-hand. “When I heard Two Rivers,” says Modirzadeh, “I said, ‘Oh, yeah, I know.'”

After hearing about each other through colleagues like Rudresh Mahanthappa and Vijay Iyer, the pair finally met at a Fred Ho recording session in late 2008. Modirzadeh and ElSaffar subsequently performed some gigs together, with Dresser and Cline. As Modirzadeh says, “There were some magical moments there. When that gig was over, I left with Amir some of my melodies. Then a few months later he came out to where I live and learned more melodies that I had worked out through a system I had developed over the last 20-25 years or so.

“Amir made it happen,” he says of their joint project. “He was ready for it. He had already gone through an orientation to the maqam system like I had with Persian music sometime in the early ’80s. I had to develop a system to integrate these non-Western tunings with chromatic harmony. I call it ‘chromodality.'” As for the album’s title, a radif, Modirzadeh explains, “is an ordering of melodies that are learned in Iranian traditional music in order to improvise from.”

Despite the pair’s heritage, they see nothing implicitly political about their coming together. “If people read into it they read into it,” says ElSaffar. More important to him is that “they seem to really be getting the cultural aspects.”

“But,” adds Modirzadeh, “and I think Amir would say the same thing, what made me want to play this music was the African-American experience. For me, everything that’s led to my concept is the acknowledging and connecting with an African-American heritage that we share. Inside of that, you’re talking about blues tonalities that are in nature and share common threads with these other tonalities from these other cultures.”

Most important, they both agree, is that listeners share the sense of exhilaration inherent in the music-making. “I really want to play with a joy that will make somebody put a [spring in their step] or laugh or just feel,” says Modirzadeh.

“Joy,” adds ElSaffar, “that’s even a better word than jazz.”

At 95, Chicago-based guitarist George Freeman is among the world’s oldest active jazz musicians. Although he came of musical age in the 1940s and counts … END_OF_DOCUMENT_TOKEN_TO_BE_REPLACED

When you’re on TV, everybody knows you, or at least thinks they know you. Take Kevin Eubanks, who was on NBC’s Tonight Show five nights … END_OF_DOCUMENT_TOKEN_TO_BE_REPLACED

Jimmy Katz leads many lives. He is the preeminent currently active jazz photographer, and has shot more than 200 magazine covers and over 600 recording … END_OF_DOCUMENT_TOKEN_TO_BE_REPLACED