Skip to content
Become a member and get exclusive access to articles, live sessions and more!
Start Your Free Trial
Home > Features > Diana Krall: Three into One 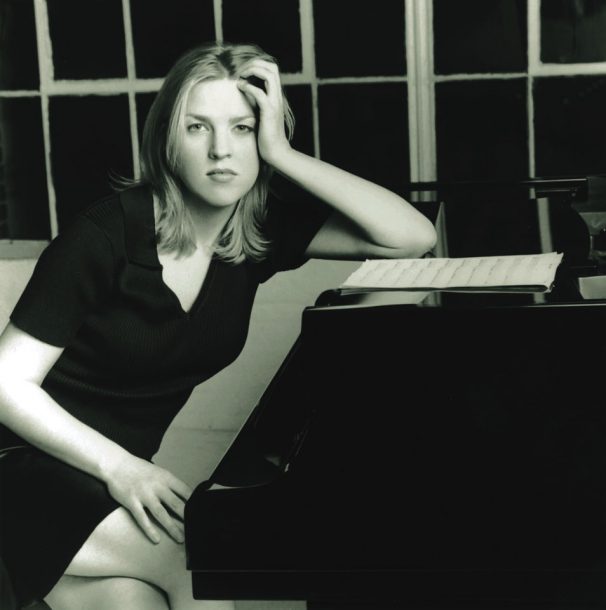 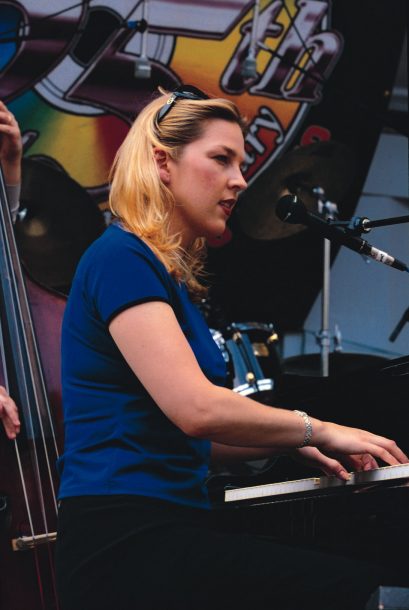 By the conclusion of her performance at this year’s North Sea Jazz Festival, Diana Krall left each member of the audience with the impression that she was singing and playing the piano solely for them.

During the three-day Dutch musical marathon, easily the most comprehensive assembly of jazz talent known to man, I had the opportunity to hear dozens of exceptional performances yet it was Krall’s remarkable rapport with guitarist Russell Malone that lingers, months after the fact. Krall’s relaxed manner immediately established a bond with the audience that she quickly magnified with the intensity and concentration of her piano and vocals.

Her tantalizing voice and knack for interpreting standards is also evident on her third Impulse!/GRP release, Love Scenes, the successor to her Nat King Cole tribute All For You. Love Scenes is a trio session with Malone, her nearly three-year musical collaborator, and bassist Christian McBride featuring the Nanaimo, British Columbia native’s renditions of such touchstones as “All or Nothing At All,” “They Can’t Take That Away From Me” and “Ghost of A Chance,” as well as her take on the quirky “Peel Me A Grape.”

When we finally had a chance to talk, she was just starting a three-week gig at New York’s lavish Oak Room in the Algonquin Hotel, with Malone and McBride. A professional who, thanks to her mom, started performing at the age of 15 in a local restaurant, takes great pride in the fact that “I’ve never had another job, I’ve always been able to play, whether it was as a solo pianist, a duo gig or with a trio. Actually, there were a lot of duo gigs where I’d call the best bass player in town so I could use the performances as a learning experience.”

It’s quite evident that Krall thrives on performing. The most exhilarating elements for her are “the connection between the musicians, which is a very emotional one, and the response of the audience.” Riding a wave of recognition which found her last recording garnering a Grammy nomination and remaining on the jazz charts for over 75 weeks, she’s quick to point out that “what motivates me is how it feels to play music.” This year alone, she was on the road performing almost non-stop from April to December.

“What all this has done,” she reveals, “is open up my opportunities to grow and learn from my peers and from the masters of the music. Opportunity pushes you and it continues to be a growing experience. I’ve been able to talk with people like Hank Jones and Nancy Wilson, and of course Ray Brown, as well as perform consistently in a musical laboratory on the bandstand. It’s these completely creative musical situations that move you forward.”

Yet even though she’s flying high, she takes nothing for granted. “When you’re given the opportunity to work with, and record with musicians who are better,” she explains, “it makes you work harder. I’m having a really good time right now but music is the important thing. It always will be.”

Being in the spotlight, the darling of fans, the media, and fellow performers like Abbey Lincoln and Tony Bennett (she fondly recalls a performance in Italy last summer where Bennett sat a foot away and smiled through the performance) does have its pressures. “You can feel like you’re under a microscope,” she reveals, “but I’ve been working so much, I really haven’t even had time to think…”

On the road, “Russell and I are always communicating about the music. After each performance, we talk about it. I’m happy people enjoy what we do but each night is different and we try not to settle into something. Really, the only pressures I feel are the ones that I put on myself to be better at my art and to keep the magic alive. It’s a tangible thing. You’ve got to stay honest with the music and yourself.”

Love Songs was recorded back in February and March and the romantic theme came about by accident. “I really wanted to do a record with no set concept so I just picked songs that I liked. No bells and whistles here, just nice tunes, beautiful songs, some that I’ve been doing for a while. After we recorded about 15 tunes, we realized they were all love songs in some form.”

The lush landscape of Krall’s Canada is captured on “My Love Is (A Mountainside,” “Gentle Rain” and “Garden in the Rain.” For Krall, these particular songs are “very personal. They’re not only romantic, they’re also about love of family, friendship, strength and nature. I spend part of the year with my family on Vancouver Island and the songs on this album touch my roots.”

Collaborating with Russell Malone, one of the most underrated guitarists on the jazz scene today, has proven to be particularly propitious for Krall. “It’s really important for me to work with other people who push me, who inspire me and Russell is like a musical partner for me. Very much so. We talk about music all the time, we talk about what’s important to us. Not so much technically, but more about how we approach the music. We both feel strongly about the importance of songs and the beauty of music. As far as inspiring me, I think he’s one of the most brilliant musicians I’ve ever met. Russell knows a lot of music, a lot of tunes and he can fit into any situation.” He has the courage and the confidence to play a beautiful melody. He never overplays.”

Working consistently with the same musicians, namely Malone and on Love Songs, Christian McBride, allows Krall to achieve a group dynamic that recalls the longstanding bands of the past, when there were more than handful or working groups in jazz. “I’m really lucky,” she acknowledges, “to be in a situation where I can do that, where the music evolves but it’s not really in any set way, each night is different.”

“This trio format,” she explains “with piano, guitar and bass, and my vocals, allows for different textures, lots of room. I can be accompanied, or accompany. The truth is Russell kicks my ass, musically and that’s great. Ray Brown taught me the value of getting your sideman experience so having to comp for a soloist like Russell is a blessing. I let him do most of the blowing.”

Not surprisingly, she speaks of McBride with equal respect. She admires his “passion for the music, his artistry, his mastery of the instrument and the way he listens and interacts. Harmonically, he’s right there with you. He rises to the challenge of each situation. Christian is a joy to work with, I don’t feel limited in any way playing with him. He’s just a sweetheart, such a warm person, who’s musically on top of everything. And like Russell, he knows so many tunes.”

“What’s missing in the jazz students of today,” she believes, “is the knowledge of songs, which isn’t surprising for someone born in 1980! Christian knows the history of his music. He respects the tradition and he’s moved on from there.”

As far as her future, Krall, a musician with very eclectic tastes, admits that “if Sting called me, I’d do background vocals. Of course I’m not going to go out and sing Verdi, even though I love opera, but I like to accept different challenges as long as they’re moving me forward. But I really, really like what I’m doing. My opportunities have exceeded any sort of dreams I may have had.”

Her three favorite CDs are:

Irene Kral, Where Is Love with Alan Broadbent

When you’re on TV, everybody knows you, or at least thinks they know you. Take Kevin Eubanks, who was on NBC’s Tonight Show five nights … END_OF_DOCUMENT_TOKEN_TO_BE_REPLACED

Jimmy Katz leads many lives. He is the preeminent currently active jazz photographer, and has shot more than 200 magazine covers and over 600 recording … END_OF_DOCUMENT_TOKEN_TO_BE_REPLACED

Take a look at Blue Note Records’ release schedule for 2022 and it’s hard to miss the significant percentage of electronic-oriented music. In March, the … END_OF_DOCUMENT_TOKEN_TO_BE_REPLACED