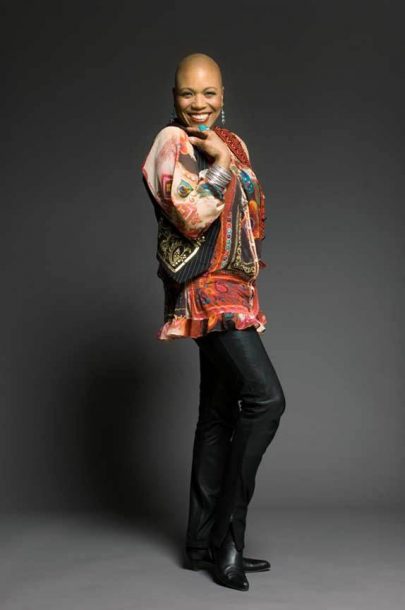 If there was only one word to describe Dee Dee Bridgewater, it would be that one-in all caps, italicized with an exclamation point. Whenever she graces the stage, she pushes the envelope through her dramatic interpretations, virtuosic scatting and daring showmanship. Sometimes, Bridgewater’s act-which, if the right mood hits her, features salacious dancing and randy repartee-sends the singer’s audience into a mild state of hysteria.

Tonight, on an early Friday in November at the Music Center at Strathmore, right outside Washington, D.C., Bridgewater is in quintessential form. In a slinky rendition of “Your Mother’s Son-in-Law,” she flirts with bassist Kenny Davis as they perform the song as a duet. Bridgewater coos and purrs the lyrics then makes suggestive analogies to Davis’ sensual, throbbing bass accompaniments. Another time, it’s saxophonist Craig Handy who appears to be the object of her desire, as she again makes risqué asides during a kittenish reading of “Lover Man.” While he delivers a hot-blooded solo, she shimmies against his muscular body in vintage burlesque fashion.

Many audience members indulge it all in stride, sometimes becoming a part of the show-on this night, one enthusiastic fan gives her a present. Bridgewater intersperses hilarious anecdotes about her three former husbands among the songs, and jokingly encourages potential suitors to become the fourth. Whereas most jazz artists tend to seem overly noble in a posh establishment such as the Strathmore, Bridgewater cuts loose, talks trash and nearly transforms the theater into a neighborhood juke joint.

“Sometimes I go to very bad places,” Bridgewater giggles in the green room, just an hour prior to the show. “Sometimes I can get really raunchy. But I feel, after [age] 50, I can do whatever I want with whomever I want, however I want. That’s my prerogative. In San Francisco, I was rubbing Craig’s leg; I took his hair and rubbed it all over my bald head.”

Many people chalk Bridgewater’s bawdy antics up to her years as a stage actress. Sometimes though, her campy, estrogen-fueled banter better resembles that of French cabaret or a South Side Chicago drag show. “Drag queens study me!” she laughs. Bridgewater then recalls a time during her R&B period when she was taken to a drag show and witnessed an interesting rendition of her minor hit from 1976, “Goin’ Through the Motions.” “This drag queen comes out, dressed in the dress that I had worn on the Tonight Show, when Flip Wilson hosted it,” she chuckles. “I just about died! She came out into the audience, came over to me, singing to me. Then they introduced me.”

In the green room before the Strathmore concert, the award-winning singer, actress and NPR radio personality reins in the fabulousness a bit. Still, her effervescent personality and wicked sense of humor shine over dinner with her bandmates and Ayo, her energetic white Maltese traveling companion. More important, however, is her fierce artistic commitment, broad musical and cultural knowledge, keen business sense and humility, all of which come through in equal measure as we discuss Eleanora Fagan (1915-1959): To Billie With Love from Dee Dee (DDB Records/Emarcy), her latest disc, which pays homage to the legendary Billie Holiday.

Just as she performed live with her band including longtime pianist and arranger Edsel Gomez and drummer Bruce Cox, her recorded interpretations of songs related to Lady Day avoid cliché. Even during a poignant rendering of “Strange Fruit,” there wasn’t a hint of commiseration during Bridgewater’s celebration of Holiday’s music. The same holds true for the new disc, which showcases an all-star lineup: Gomez, Christian McBride, Lewis Nash and James Carter. “I’m not trying to present Billie in that maudlin, sad and sorrowful way that everyone tends to look at her and her music,” Bridgewater explains. “She had a really dry sense of humor, almost a British sense of humor. I wanted to present another side or another interpretation of her music.”

Two decades ago, Bridgewater got a chance to show Paris just how well she can capture Holiday when she starred in Stephen Stahl’s play Lady Day. Basically a one-woman show in two acts-a fictitious rehearsal and a performance, right before Holiday’s death in 1959-the play afforded Bridgewater a Laurence Olivier Award nomination for Best Actress in a Musical. After doing tremendous research through European film footage, radio shows and newspaper and magazine interviews, Bridgewater imbued her portrayal of Holiday with a zest that cut through the usual tragic depiction. “In that play, I made a point of bringing out that aspect of her character so that people didn’t walk away with this attitude that she was this person of prolonged suffering, or a woman who was victimized throughout her entire life,” Bridgewater says.

“She was actually an amazing woman who was able to surmount a lot of horrible things that happened to her, and I think it was through music that she was able to do that,” the singer continues. “She was a victim of her time in which racism was very prevalent. Black people had to sit at the back of the bus; black people could do concerts at these wonderful concert halls but had to enter through the kitchen then leave the establishment as soon as they finished. I think it’s understandable with all the brutality that she suffered as a child-she was raped when she was 7; she lived in a whorehouse by the time she was 13; she was turning tricks then she becomes this glamorized individual-that we were dealing with a very complex personality.”

When you’re on TV, everybody knows you, or at least thinks they know you. Take Kevin Eubanks, who was on NBC’s Tonight Show five nights … END_OF_DOCUMENT_TOKEN_TO_BE_REPLACED

Jimmy Katz leads many lives. He is the preeminent currently active jazz photographer, and has shot more than 200 magazine covers and over 600 recording … END_OF_DOCUMENT_TOKEN_TO_BE_REPLACED

Take a look at Blue Note Records’ release schedule for 2022 and it’s hard to miss the significant percentage of electronic-oriented music. In March, the … END_OF_DOCUMENT_TOKEN_TO_BE_REPLACED