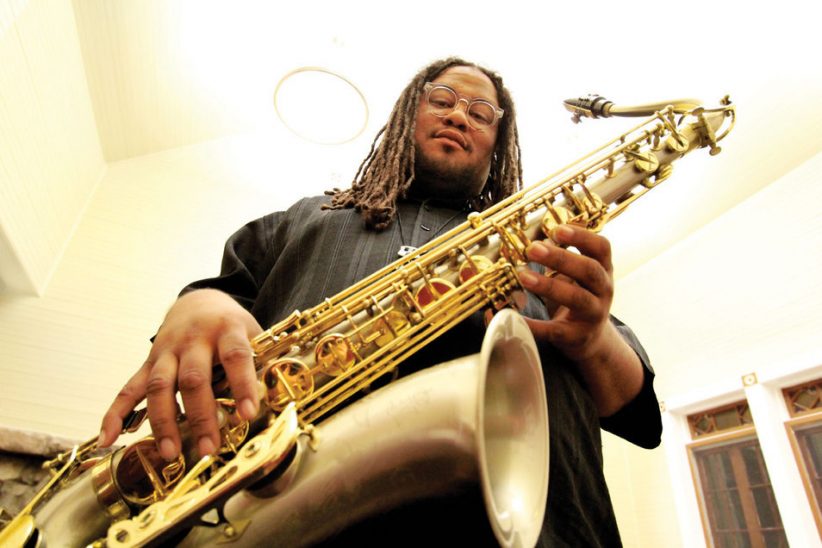 That Nepenthetic Place (Sunnyside), the captivating third album from the Paterson, N.J.-based tenor saxophonist Dayna Stephens, builds slowly. It doesn’t hurry. At its wildest, on a take of “Impressions,” things catch fire but never burn down the house. “Where’s the tension in letting go completely?” it seems to ask. The perils of moving too quickly are always on Stephens’ mind.

“I think that’s just me being honest about who I am naturally,” explains Stephens when asked about the composed nature of Nepenthetic. “I’m telling myself these things as I’m playing: ‘It doesn’t need to be rushed’ and ‘Just take your time.’ So maybe it comes across that way without even saying it.”

Stephens has exhibited patience on other fronts too. In 1998, during his first month as a student at the Berklee College of Music, the saxophonist was diagnosed with Focal Segmental Glomerulosclerosis, a disease marked by scarring on the kidneys. Then, in 2009, his kidneys “went out,” and he hopped on the list for a transplant. The typical wait for a kidney transplant in New Jersey is five to seven years, so he’s hoping to hear some good news around the end of 2014. “We all have a different price tag for life,” says Stephens. “We have a different price to pay. [The] price of admission is different. As long as you’re willing to pay the price, you’ll get to have the gift of living and experiencing life in the 21st century.”

Born in Brooklyn in 1978 but raised in the Bay Area, Stephens took an early giant step in ’96 by transferring to Berkeley High School, an institution that had developed players like saxophonist Joshua Redman and pianist Benny Green. After Berkeley came Berklee, and after Berklee came the Thelonious Monk Institute of Jazz, where Stephens would interact with veterans like guitarist John Scofield and fellow tenorman Wayne Shorter. Stephens’ time at the institute, 2001 to 2003, proved fruitful; Sco would guest on his 2007 debut and Shorter demystified the compositional process for him.

“When you’re looking to take on a big task, it could seem extremely daunting,” reflects Stephens on what he learned from the Night Dreamer. “And overwhelming almost to the point where you don’t even wanna do it sometimes. That’s why I really am strong on simplification of something, or even consolidating, however you wanna say it. And just looking at Wayne write a piece of music, it made it really simple in my head, the way the process goes. And it’s literally just writing a melody and fishing around for what the under-harmony should be for it. That’s it. What else do you need? [laughs] It just made me feel so much more at ease when it came to writing music.”

That calmness with the compositional process radiates throughout Nepenthetic. (A nepenthe is a drug, described in Greek mythology, that makes one forget suffering and sadness.) Fleshed out by the quartet of Stephens, pianist Taylor Eigsti, bassist Joe Sanders and drummer Justin Brown, plus trumpeter Ambrose Akinmusire, alto saxophonist Jaleel Shaw and vocalist Gretchen Parlato on some tracks, the album feels loose but cohesive, warm but strong. Fueled by soothing electric piano, a yearning scat solo from Parlato and the leader’s emotional, questing lines, the ominous, playful “Wink Wink” draws its inspiration from an improvisation found on a Mark Turner piece entitled “Iverson’s Odyssey,” named for pianist Ethan Iverson. “An assignment in the Monk Institute was to transcribe a solo and write a song based on that solo,” says Stephens. “I liked [guitarist Kurt Rosenwinkel’s] solo on that song, although it’s a Mark tune. That’s kind of where it came from. And that was a song we did in the Monk Institute, by the way. So me and Gretchen have played that song many, many, many times.”

Parlato and Stephens first connected as students at the institute. The title track of Parlato’s latest album, 2011’s The Lost and Found, is a Stephens song that she wrote lyrics to. “[Dayna is] one of those people who I completely trust,” says Parlato. “His tone. His energy of what he offers is so comforting and it’s so relatable, yet every time I’m surprised and kind of taken to another place. He takes the music to another level every time he plays. I love that combination of being really welcoming and warm and trusting but then pushing the music and pushing the energy and keeping everybody on their toes and at the edge of their seats as listeners.”

Stephens doesn’t just command attention, though; he’s a good hearer himself. The cover of Nepenthetic shows him-big glasses, scraggly beard, corduroy cap, subtle smile-cradling his tenor, its bell to his ear. What’s it telling him? “Keep doin’ it,” reveals Stephens. “Keep goin’ till the end. Until you can’t no more.”

Guitarist Will Bernard bears the bittersweet blessing of virtuosic skill and eclectic taste, making his music a perpetual delight and yet hard to categorize. Maybe … END_OF_DOCUMENT_TOKEN_TO_BE_REPLACED

At 95, Chicago-based guitarist George Freeman is among the world’s oldest active jazz musicians. Although he came of musical age in the 1940s and counts … END_OF_DOCUMENT_TOKEN_TO_BE_REPLACED

When you’re on TV, everybody knows you, or at least thinks they know you. Take Kevin Eubanks, who was on NBC’s Tonight Show five nights … END_OF_DOCUMENT_TOKEN_TO_BE_REPLACED