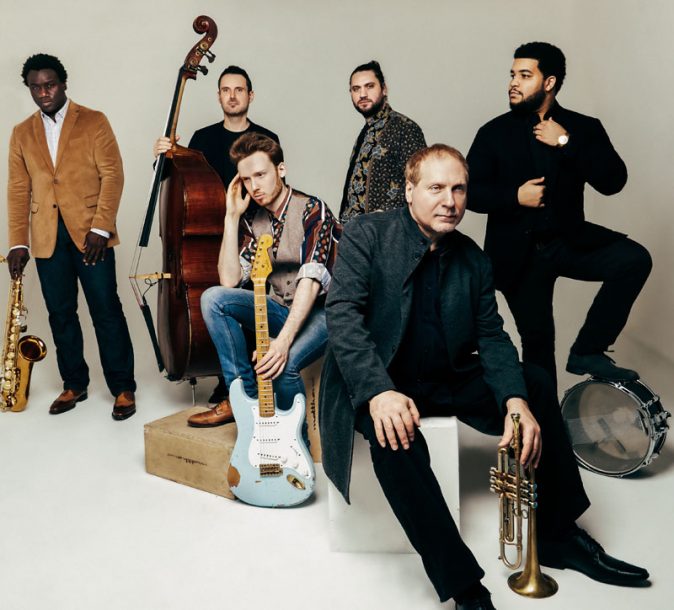 With Point of Departure, a group exploring charged and often lesser-known repertoire from the late ’60s and early ’70s, trumpeter/bandleader David Weiss has spent more than 10 years testing the youngest and rawest of New York talent through trial-by-fire on the bandstand. Talk to virtually any PoD member and they’ll offer some version of the sentiment voiced by tenor saxophonist JD Allen: “I was new in town and David was one of the only guys that gave me a shot in the beginning. He gave me work.”

Maintaining a band is notoriously difficult, but for Weiss, PoD has proved relatively simple: “If you have absolutely no pressures, then you have all the time in the world to do whatever you want. You just let it all happen.” In practical terms this means a hell-raising monthly gig at Fat Cat in New York’s West Village, plus rehearsals-cum-auditions to keep a steady rotation of eager young subs in the wings. And when inspiration strikes, you make a record: Wake Up Call (Ropeadope), PoD’s newest release, is the first to feature the two-guitar concept that Weiss and company have refined lately in the live setting. The album follows Venture Inward (2013), Snuck Out (2011) and Snuck In (2010).

Point of Departure’s music hovers between acoustic and electric jazz, much as the Miles Davis “Lost Quintet” once did. There’s a classic trumpet-tenor sax frontline with upright bass and drums. But where you’d expect a piano there’s instead a solidbody guitar—now two guitars, with two distinct aesthetics and tonal personalities. The band’s modernist, at times abstract harmony can evoke the world of Andrew Hill (the band gets its name from Hill’s 1965 magnum opus on Blue Note). And while the repertoire includes items from the Davis and Hill catalogs, there are also numerous pieces by the late Charles Moore, trumpeter in the Detroit-based Contemporary Jazz Quintet led by pianist Kenny Cox. This oeuvre was unknown to most of Weiss’ recruits when they first heard it—even to Allen, a native Detroiter who as a teen had met Moore and Cox in the flesh.

The CJQ represents a fascinating offshoot of the Miles Davis sound, but with its own harmonic and rhythmic signature. Weiss has harnessed Moore’s complex metric shifts and cueing systems to PoD’s musical purposes. “Those guys still basically swung through the solo sections,” Weiss says of the CJQ. “We said, ‘Well, we’re going to do anything.’ We’re going to groove it more, we’ll break it down, we’ll open it up to any possibility. The music was just a framework. It took us a minute to work out all the things we could do, but it was pretty liberating.”

Right from the start, around 2006, Fat Cat served as PoD’s laboratory. A large billiard and game hall with plentiful beer flowing for the college crowd, the club at first had a separate music room with a partition that was ultimately declared illegal by New York City authorities. There was just one guitarist, Nir Felder, with a host of soloists and rhythm-section players passing through: saxophonists Mark Shim and Marcus Strickland, bassist Luques Curtis, drummers Jamire Williams and Rudy Royston. Weiss recalls a certain magic in that now-vanished room: “It really was beautiful. It had freakishly good sound too—you could find a sweet spot on the floor and your whole body would resonate. We barely used amplification back then because everything rang out so well.”

Now without the wall, bands play directly in the main room and are ignored by 80 percent of the patrons. The remaining 20 percent are another story: They gather on comfortable couches and chairs with a direct sightline to the players and become utterly absorbed. The density of the drinking crowd serves as soundproofing: At a gig in late March, the brash horns of Weiss and tenor saxophonist Lawrence Clark (subbing for Myron Walden), the relentless bass and drums of Matt Clohesy and Kush Abadey, and the cranked volcanic guitars of Ben Eunson and Andrew Renfroe (subbing for Travis Reuter) sounded warm, satisfying and perfectly in balance. “It’s very high-energy from a rhythm-section point of view,” Clohesy says, “and the soloing is very stretched out, so it’s really an endurance thing. In the beginning I found it physically draining, but now I really appreciate it. I love the energy.”

Continuous sets without pauses, in the manner of ’70s Miles and the Tony Williams Lifetime (and the Contemporary Jazz Quintet, for that matter), have been another chief aspect of PoD’s method from the outset. Reuter remembers entire sets where he never once took his hands off the guitar. “It’s easy to lay out if you’re comping behind a soloist,” he says, “but the gig was a lot more fun if I was playing 100 percent the whole time.” Blending with fellow guitarist Eunson was another welcome challenge.

For two-guitar precedents, one can point to Miles Davis’ use of two fuzzed-out keyboards circa 1970; or two guitars on Pangea and Agharta; or, as Eunson points out, Marc Johnson’s use of John Scofield and Bill Frisell in his quartet Bass Desires. But there’s another influence entirely: the Haitian compas music of Tabou Combo, with whom Weiss used to play. “The thing [that band] really did well is when the two guitarists played together and did these interweaving lines,” the trumpeter recounts. “The other thing is how they recorded horns: One would play a line and then play it again, and they’d pan it left and right, creating this weird stereo sound. It’s never perfectly in tune, so it gives you this kind of wavy thing coming out of both speakers. That’s the idea I had for the [PoD] guitars too.”

The rapport between Reuter and Eunson is very particular, as Eunson notes: “My role is closer to a chordal approach, with a little distortion that fills out the sound like a Rhodes. By contrast, Travis has these wonderful atmospheric sounds, these soundscapes that complement what I do and vice versa. There’s a lot of listening going on.” Weiss is happy with that. “Ben’s ridiculous,” he declares. “He shreds, he does it all and it’s tasteful and melodic. But Travis was really the secret weapon. He’s got a whole different thing going on. And Ben and Travis got along well.”

Putting different incarnations of the band onto the same album, Wake Up Call proceeds in three parts. First is a “Prologue,” an incendiary reading of Mahavishnu Orchestra’s “Sanctuary” featuring the Eunson/Reuter matchup and Walden on tenor. Part II is “Unfinished Business,” three valedictory tracks with the original PoD lineup of Nir Felder and JD Allen. Part III is “New Beginning,” with a return to the new personnel. The album’s repertoire ranges from Charles Moore and Kenny Cox (the beautiful “Sojourn”) to Wayne Shorter, Joe Henderson, Tony Williams and the Brazilian Grupo Um.

What unites all of this music, and all these players, is mastery of the tradition, deep reverence for the material and an eagerness and ability to connect to listeners in 2017. “I think that’s always been the fight in this music,” Weiss says. “It’s always been this tug of war. As long as we lay down a groove, we can still go through these time changes and harmonies and do all the stuff that’s interesting to us. You want to find this balance between reaching people and hitting them over the head with a little extra.”

On the enchanted evening of August 16, 1958, Ella Fitzgerald took to the stage of the legendary Hollywood Bowl. There, with a lustrous orchestra conducted … END_OF_DOCUMENT_TOKEN_TO_BE_REPLACED

Be careful what you wish for.  By the beginning of 2020 guitarist Mary Halvorson, one of the most acclaimed musicians of her generation, was also … END_OF_DOCUMENT_TOKEN_TO_BE_REPLACED

Guitarist Will Bernard bears the bittersweet blessing of virtuosic skill and eclectic taste, making his music a perpetual delight and yet hard to categorize. Maybe … END_OF_DOCUMENT_TOKEN_TO_BE_REPLACED

At 95, Chicago-based guitarist George Freeman is among the world’s oldest active jazz musicians. Although he came of musical age in the 1940s and counts … END_OF_DOCUMENT_TOKEN_TO_BE_REPLACED