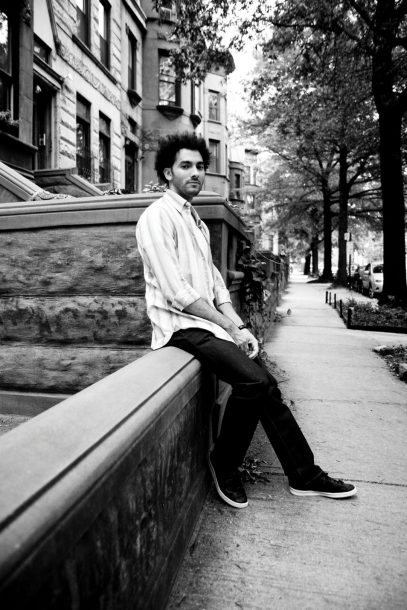 David Virelles has carved a niche for himself as a first-call pianist in groups led by saxophonists Steve Coleman, Chris Potter, Mark Turner, Ravi Coltrane and Jane Bunnett, but his affinity for woodwind players is only part of the story that unfolds on Continuum (Pi), the 29-year-old’s rhythmically adventurous sophomore album. The continuum Virelles refers to is a non-linear one, blending Afro-Cuban folklore, spoken word and contemporary harmony: Chano Pozo meets Cecil Taylor meets the Roots.

“[David is] a very creative person and he has excellent technique,” says drummer Andrew Cyrille, who anchors the album’s arresting though elusive rhythm section alongside bassist Ben Street and auxiliary percussionist Roman Diaz, who also recites hot-blooded poetry. “He knows what he wants to do and he knows how to communicate to all of us so we can deliver what he wants compositionally.”

This decisiveness is evident throughout Continuum, nebulous but deliberate in its lack of any metronomic cadence, tentative but exact in its adherence to beautiful dissonance. The album, on which Virelles plays piano, Wurlitzer, pump organ and harmonium, rewards a continuous, focused listen. Its clangorous walls of sound create a sense of three-dimensionality, while time bends and flits between and behind the beat. “A lot of it sounds open, but there’s a rhythm to it, even though it’s not on a grid,” Virelles says. “All the layers behave independently. I would try to have polyrhythms within polyrhythms.”

Trumpeter Jonathan Finlayson met Virelles in Toronto nearly a decade ago through mutual collaborator Steve Coleman and is featured on Continuum. “[David] brings his culture with him, but it’s not like he’s putting a block on top of a block,” says Finlayson. “It very seamlessly integrates with any situation. It’s not overt, but it’s there. Not a lot of people can do that.”

Virelles started cobbling together his disparate influences in Santiago, Cuba, practically from the womb. His father, Jose Aquiles, is a still-active singer-songwriter who performed regularly at the Casa de la Trova in Santiago, a venue considered hallowed ground in the history of Afro-Cuban music. David began studying classical piano at 7, playing Bach and Scriabin before long, but he followed his ears elsewhere. “Santiago is a very musical city,” Virelles says. “You go out and there are people playing in the streets.”

But Virelles caught the jazz bug indoors, after discovering his audiophile grandfather’s record collection. “I fell in love with the sound of the records I was listening to-Monk and Andrew Hill, and Bud Powell,” he says. “Playing jazz was something that just happened; it wasn’t a clear decision I had to make. I remember seeing Gonzalo Rubalcaba on TV and thinking, ‘There’s something he’s doing that I would really like to do.'”

During high school, Virelles met Jane Bunnett, who organized trips to Cuba to help educate local students about the origins of their traditional music and spread the jazz gospel. She facilitated Virelles’ move to Toronto and even used him as a sideman. He graduated from Humber College and launched a career on the Toronto scene.

In 2009, Virelles received a grant from the Canadian government to study with saxophonist and composer Henry Threadgill in New York City; he jumped at the offer. “That was a life-changing experience,” Virelles says. “He’s so original, and always so fresh. He’s obsessed with keeping that energy going.”

With the harmonic plane busted open by Threadgrill, Virelles soon made his move permanent. More transformative experiences followed, including studies with Barry Harris and Steve Coleman and performances with Wadada Leo Smith. Through Bunnett Virelles met Ravi Coltrane, a connection that has done much to raise the pianist’s profile. Virelles occupied the piano bench at Coltrane’s most recent Village Vanguard stand and recently embarked on a European tour with the saxophonist’s band.

All of Virelles’ work, especially Continuum, feeds his m.o. of creativity without categories. “There are no defining lines between things,” he says. “[The album serves] the idea of different generations interacting together coming from different cultures, but at the same time related by a certain cultural aesthetic. It was a tribute to everything that’s happened before and how that projects into the future.”

When you’re on TV, everybody knows you, or at least thinks they know you. Take Kevin Eubanks, who was on NBC’s Tonight Show five nights … END_OF_DOCUMENT_TOKEN_TO_BE_REPLACED

Jimmy Katz leads many lives. He is the preeminent currently active jazz photographer, and has shot more than 200 magazine covers and over 600 recording … END_OF_DOCUMENT_TOKEN_TO_BE_REPLACED

Take a look at Blue Note Records’ release schedule for 2022 and it’s hard to miss the significant percentage of electronic-oriented music. In March, the … END_OF_DOCUMENT_TOKEN_TO_BE_REPLACED