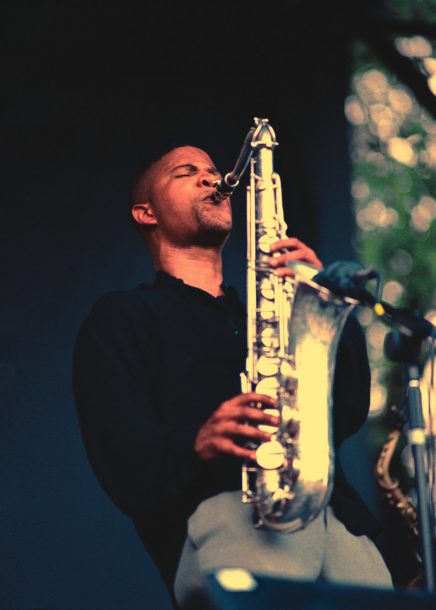 Saxophonist David Sanchez’s bilingual skills are not limited to speech. At age 29 this Puerto Riqueno is one of the finest young practitioners of his instrument in the jazz ranks, yet he is an equally skilled navigator in the warm waters of Latin music-specifically Latin jazz-as well. And if you don’t think those are separate skills, witness the fact that even the great Charlie Parker was a bit tripped up upon his initial encounters with Latin rhythms, and his compadre Dizzy Gillespie required the good counsel of Machito, Mario Bauza and Chano Pozo before even he mastered the vast Latin American rhythmic palette. Befitting the lineage and skills of his current band-John Benitez on bass, Edsel Gomez on piano, Adam Cruz on drums and Bernell Saturnino on percussion, augmented by Richie Flores’ percussion-David’s new release Obsesión, his fourth issue for Columbia, is a celebration of Latin American standards, with one Stateside ringer, Ray Bryant’s “Cuban Fantasy.”

“[Obsesión] is a completely different vibe,” Sanchez explained during our conversation, “It’s the first time I did something with music I grew up with: rhythms from Puerto Rico mainly, bomba, plena; some stuff from Brazil, batucada, partido alto; and of course the Cuban influence is in there, but mainly Puerto Rico and Brazil. I always wanted to do a Latin American standards recording, not just from Puerto Rico but in general. In Latin America these songs are very popular: ‘Lamento Borincano’ is like a second anthem in Puerto Rico; ‘Omorro Nao Tem Vez’ is a song that everybody knows,” Sanchez enthused. In addition to the tight, highly communicative nature of David’s band, there is a lush quality to the recording, owed in no small measure to the orchestrations of Argentine arranger Carlos Franzetti, who leavened the sound with string quartet and woodwinds. “Carlos Franzetti used to have a group called Orquestra Nova and they would deal with that type of orchestration; and on top of that he knows Brazilian orchestration and things like that.”

Obsesión is a splendid manifestation of Sanchez’s ongoing investigation and immersion in the music and rhythms of Latin America, an obsession whose depth is revealed by an examination of the steady and sure progress of his career. “I used to play percussion and I’m trying to get back into the rhythms.” That careful scrutiny was assisted last December by his triumphant experience in Havana at Chucho Valdes’ jazz festival.

“It’s kind of like a movement now, everybody wants to go to Cuba. It takes years of study and you know Cuba is just a little part of Latin America. People say, ‘Oh, Afro-Cuban,’ I say ‘Man, check Brazil out, you’ll be in love, it’s a whole entire world!’ Bahia is like Africa man, then you get Rio, Sao Paolo, a different vibe in each. Then you’ve got music from Columbia, which is very interesting also, and you’ve got music from Puerto Rico that is incredible, danza, plena, bomba…Latin America is very wide, very big.”

Based on his incendiary performances and the huge grin David seemed to sport throughout the week, the Cuba experience was obviously energizing. “It was beautiful, great…The best thing is that we had a chance to interact with the bands there. I did one song for Armando Maraca for his next record, at the studio where Benny More used to record [new Egrem, the state recording company]. I played with Climax, Issac Delgado, beautiful spirits man!” Cuba was clearly part of David’s learning curve. “Almost 90% of things that have to do with interacting with other musicians are a learning experience. In this case it was special because our two cultures influence each other and people [in Cuba] that I met that knew about me said ‘finally,’ and that’s the same thing I said; I’m finally here!”

The importance of his band to Sanchez’s continuing incorporation of the rhythms of the Caribbean basin in particular and Latin America in general becomes crystal clear when you see them in performance these days. Particularly in Havana, but also at their late night set at the IAJE Convention last January, the connection of these kindred artists was both audible and visible.

“It’s like a family,” David confirmed. “When you start playing together on a regular basis and everybody knows each other, it’s easier because it’s always gonna be different. When you know who you’re playing with then you know how to deal every single night because you know where everybody’s coming from. You’re still learning from everybody, but you have a general knowledge of each other and it’s great.” In this case the kinship is cultural as well as musical. “John Benitez and I went to school together since we were 12; Edsel, who is also Puerto Rican, I met later on; Adam, who is of Puerto Rican descent, I met when we went to college at Rutgers in 1988. Bernell is from Curaçao, I met him four years ago.”

While David’s band and ensemble concept are at a new peak, his playing has broadened noticeably since he arrived in ’88, a fact borne out by an examination of his developmental arc as it relates to the sound he elicits from his saxophones. “Sound to me is the most important thing. I don’t care how many notes people play, notes are notes, but sound is your voice and it’s very important. I try to check out as many saxophonists as I can to check out different perspectives, different types of sounds. I’ve been checking out a little more Coleman Hawkins, that school of saxophone playing. I always relate to Sonny Rollins, and Sonny comes from Hawkins. I’m trying to get as much as I can of that full, beautiful sound. I’m experimenting, working on different things. I think my sound has changed a lot through my recordings.”

Just as precisely, David’s overall conception of music has broadened as well. “In many ways,” he confirms, “because of the type of music that you listen to, the musicians you go around. That’s why New York is such a great place because you meet so many people from different cultural backgrounds and different perspectives. Having the chance to work with different masters: in the time since I’ve been in New York I’ve worked with Eddie Palmieri, Kenny Barron, Elvin Jones, McCoy Tyner…they’re all incredible and great, and they’re very different. Together with checking out other people who I admire, you keep adding little things from everybody; every time you play it’s a learning experience, no matter what. Little by little that affects you and you start changing the way you think about music.

“When I did things with Danilo Perez that’s another vibe also, that was when I really started to put my thing together when we started a quartet with Danilo. We had a very special connection also and these things start to change the way you look at music. I’ve been checking out Middle Eastern music, lots of flamenco music, Brazilian music for the past year and a half, some African stuff…that changes the way you look at music. And not just world music, music from the States: jazz, hip-hop, funk…”

David recently renewed one of his deepest musical acquaintances when he performed a very special duet concert with the king of Latin piano, Eddie Palmieri, who, after agreeing with David on a pre-concert set list of music, completely flipped the script and he and David took the rapt audience on an improvisational journey. “It was beautiful! It had been a long time since I played with Eddie. I used to play with Eddie back when I first got into the States, for about three years, then I started working with Dizzy Gillespie, which was the greatest experience that I ever had. To see Eddie and play in that duo circumstance was very challenging. It’s not easy to play duo period, without any bass and drums or anything else.” The music on that miraculous night was definitely of the moment. “On the spot, and that’s the way Eddie deals, and it’s beautiful because it’s so organic. He just relaxes onstage and changes the stuff around,” David laughs. “We’re going to try to do that more often because we had a ball, we just gotta play and do it again.”

Based on the ample evidence of Obsesión, coupled with the deeply rhythmic level of telepathic communication he and his band are steadily evolving and his enthusiasm for music of both familiar and disparate cultures, the odyssey of David Sanchez bears close watch. And if you were there in Havana at La Casa de Cultura, Teatro Nacional, or the Hotel Riviera; at the Marriot Marquis for his IAJE performance last January, perhaps at Baird Auditorium for the date with Palmieri, or at one of the increasing number of gigs he performs around the States, you’ve been duly informed. If you weren’t there then Obsesión will suffice beautifully.

Guitarist Will Bernard bears the bittersweet blessing of virtuosic skill and eclectic taste, making his music a perpetual delight and yet hard to categorize. Maybe … END_OF_DOCUMENT_TOKEN_TO_BE_REPLACED

At 95, Chicago-based guitarist George Freeman is among the world’s oldest active jazz musicians. Although he came of musical age in the 1940s and counts … END_OF_DOCUMENT_TOKEN_TO_BE_REPLACED

When you’re on TV, everybody knows you, or at least thinks they know you. Take Kevin Eubanks, who was on NBC’s Tonight Show five nights … END_OF_DOCUMENT_TOKEN_TO_BE_REPLACED