Skip to content
Become a member and get exclusive access to articles, live sessions and more!
Start Your Free Trial
Home > Features > David S. Ware: After the Storm 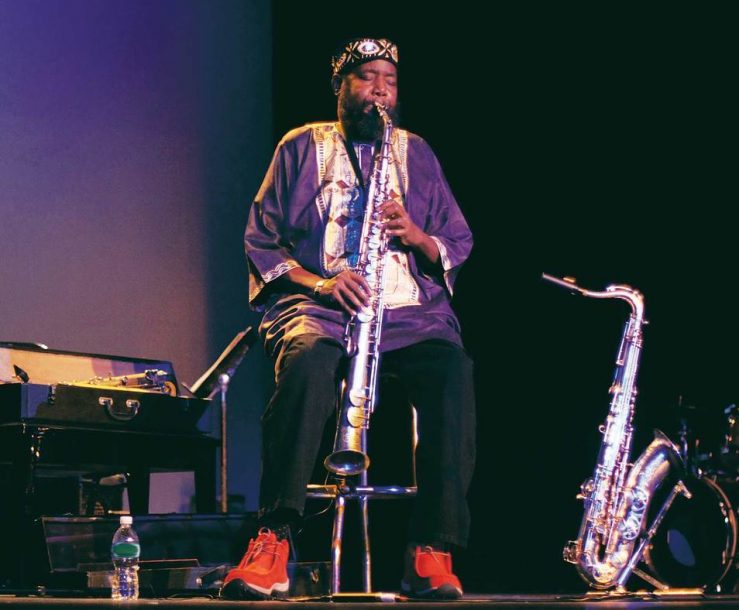 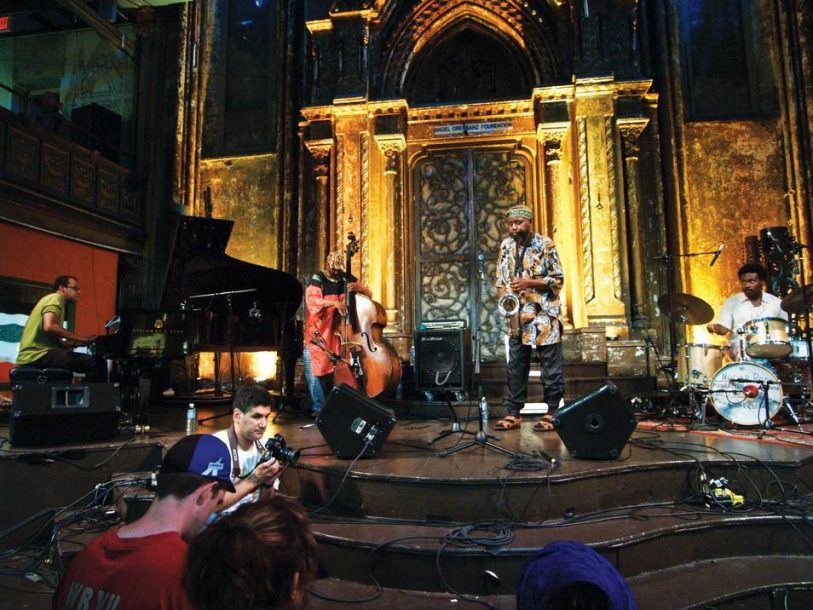 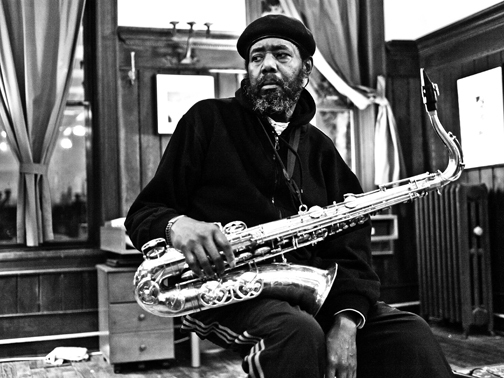 There were torrential rains, and gusts up to 60 miles per hour, on the night in mid-March when saxophone icon David S. Ware played solo before an intimate crowd in Brooklyn. Seated in the cozy home office of host Garrett Shelton, a music industry consultant, Ware began with an assertive, enveloping improvisation on sopranino-a new horn in his arsenal-and followed it with an extended tenor display, rigorously developed, with mounting sonic power.

After he finished, Ware played up the salon-like atmosphere by inviting questions from listeners. Multi-instrumentalist Cooper-Moore, Ware’s good friend and one-time roommate, who (like me) nearly missed the show on account of a subway power outage, was among the first to speak. He noted that the weather was also perfectly miserable on Oct. 15, 2009, the night of Ware’s previous solo concert. So one had to wonder, “What’s goin’ on with you, man?” Laughing, Ware pivoted to the subject of his friend and mentor Sonny Rollins, who once told him that severe weather is actually conducive to the playing of adventurous music.

If that is the case, there’s probably a parallel between the wind and rain of the external world and the turmoil within. The October concert was Ware’s first live appearance since receiving a kidney transplant in May 2009. Saturnian (solo saxophones, volume 1) , Ware’s newest disc on AUM Fidelity, is the result. The music from the Brooklyn concert will likely see release as volume 2. Even if the surgery and its perilous aftermath have exacted a toll on the 60-year-old Ware, drastically slowing his performance schedule, he seems all the more determined to bounce back and push his improvising into new and fresh terrain. But Cooper-Moore’s tongue-in-cheek question hinted at concerns widely shared by Ware’s fans, friends and admirers.

Three days after the Brooklyn gig, I caught up with Ware at his home in Scotch Plains, N.J.-his childhood home, in fact-where he lives with Setsuko, his wife of 25 years. He walked with a fair amount of difficulty into a small den with roughly nine horn cases, four Indian shenais, an upright piano and two large plastic bags stuffed with various medications, most to be taken daily. Settling into a cushiony green chair and keeping his feet elevated, he pondered, “You know where I play my best stuff? Right here in this room.”

In the New York Times shortly after the October comeback concert, reporter Susan Dominus told the tale of Ware’s 10 long years of dialysis, culminating in an urgent e-mail blast from AUM Fidelity’s Steven Joerg in search of a kidney donor. Success was relatively quick: Ware was matched with Laura Mehr, a 57-year-old jewelry designer from Florida, whose late husband had been a Ware fan and acquaintance.

This was a fortunate turn, and Ware knows it. But the road since the transplant has been rough, and his frustration is palpable. “I was this close to a wheelchair,” he recalls. “Everything was fine; I was going to the gym three times a week. Then the kidney started to reject. They had to give me all these heavy-duty steroids to save the kidney. And it damn near crippled me. I couldn’t lift my leg to step up on the curb. … I’ve been through motorcycle accidents, taxicab accidents, I had a shattered foot and ankle here in ’86, I had a busted knee here, I was born with a bad hip. But never nothing like this. You’re supposed to go to them to get a better life and you wind up with more problems.”

Ware also developed diabetes. For months he’s been making 80-mile round trips to a center that offers infrared therapy for nerve regeneration in his legs and feet. He’s pleased so far with the results. “The transplant team couldn’t help me with this,” he notes. “I had to find the physical therapy people on my own.”

One could look at Ware’s shift toward solo concerts, after nearly two decades spent leading the famed David S. Ware Quartet, as a gesture of pure determination and self-reliance, a way of saying, “Here I stand.” But it’s also simply where his ear took him. “I did a solo because I heard saxophone,” he told me last winter after the Saturnian date. “I didn’t hear a quartet, I didn’t hear a trio, I didn’t hear a duo; I heard saxophone.” During the Brooklyn Q&A, he added, “I want to make it clear what I’m doing. I want people to hear the intricacies. And it’s a challenge for me.” A challenge, it should be noted, that he’s embraced at earlier points in his career. “I’ve done solo tours where I’ve played 90 minutes on one instrument,” he offers. “That was then, this is now.”

Even as Ware carves his expression down to a single solo voice, he has broadened his sound palette by including horns other than the tenor sax: the saxello (a B-flat soprano with a more angular shape), the stritch (essentially a straightened alto) and the sopranino (in E-flat, like an alto, but an octave higher). The first two, most often associated with the late Rahsaan Roland Kirk, play a prominent role on Saturnian. They’ll make an encore appearance on Ware’s absorbing, as-yet-untitled trio session with bassist William Parker and percussionist Warren Smith, slated for release in late summer or early fall of 2010. Ware’s previous work with the saxello and stritch can be heard on the Silkheart albums Passage to Music (1988) and the two-volume Great Bliss (1990/1994).

“I’ve been really on the saxello since the transplant,” Ware says, musing on what led him to the alternative horns. “It’s so easy to pick up-you just open the case, ain’t a lot of fuss, it’s not heavy. I’ve got it right here [points next to his chair]. So I was on that, man. On it, on it, on it. And you just start hearing higher. Your ear starts to gravitate toward the higher pitches. I said, ‘Wow, maybe I’d like something even higher than this.'” After consulting fellow multi-saxophonist James Carter on the best brand of sopranino, and “listening to examples on YouTube of cats playing it” (including Anthony Braxton and Roscoe Mitchell), Ware acquired one of his own.

“I could hear in the mid-’70s that [Ware] was going to go higher,” recalls Cooper-Moore. “And the horns he’s playing now, you can’t play sloppy, you can’t hide behind the horn. You can’t fake anything on the sopranino. Nothing. You’re really naked. You’re up there by yourself. You shouldn’t put it in your mouth unless you have some capacity to deal with it. David understands it.”

Ware’s convalescence led him to another decision, which he stated plainly in Brooklyn: “I don’t wanna play no tunes.” After years of mainly compositional focus with the quartet, Ware has rededicated himself to wholly free improvisation, the approach heard on Saturnian as well as the forthcoming trio document. “I can better escape my intellect through the instrument than through the pen,” Ware submits. “So I’ve decided in this period I’m going to go with my forte, man. Playing is my forte.” Several times he refers to this modality as “so-called free.” Why? “Because there’s a hell of a lot more to it. If you’re not practicing all the time, you can’t do it. And if you don’t have a wellspring of ideas, you can’t do it. How you gonna do it?”

To reach this state of preparedness, one could do worse than adopt a meditative, reclusive existence such as Ware’s. Here is someone who decided long ago to be his own boss, literally, working always on his own terms and at his own pace. Although he was impacted by early sideman stints with Cecil Taylor, Andrew Cyrille, Milford Graves and others, Ware was never much interested in freelancing, or collaborating restlessly with every likeminded musician under the sun. “David really is about the David S. Ware universe,” says Matthew Shipp, the sole pianist in Ware’s long-lived quartet. “He’s spent his whole life thinking about his own particular, idiosyncratic ways of approaching things, and having a unit that caters to that vision and that worldview.”

When you’re on TV, everybody knows you, or at least thinks they know you. Take Kevin Eubanks, who was on NBC’s Tonight Show five nights … END_OF_DOCUMENT_TOKEN_TO_BE_REPLACED

Jimmy Katz leads many lives. He is the preeminent currently active jazz photographer, and has shot more than 200 magazine covers and over 600 recording … END_OF_DOCUMENT_TOKEN_TO_BE_REPLACED

Take a look at Blue Note Records’ release schedule for 2022 and it’s hard to miss the significant percentage of electronic-oriented music. In March, the … END_OF_DOCUMENT_TOKEN_TO_BE_REPLACED