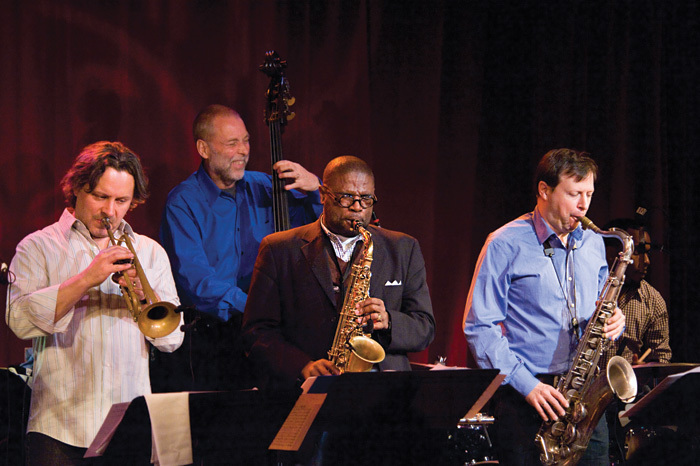 Somewhere in New York State’s Hudson Valley, about 3,300 miles away from his birthplace in the English industrial city of Wolverhampton, wondrous sounds are issuing forth from the home of bassist, composer and bandleader Dave Holland. The most prominent Wulfrunian on the planet as well as England’s most famous jazz export, Holland takes a break from composing and arranging new material to chat with JazzTimes via phone. His workroom, which overlooks his wife Clare’s backyard garden, has been Holland’s fortress of solitude since the mid-’80s.

It’s where he meticulously inputs data into a Mac computer, playing trial-and-error with different horn voicings while shifting around intricate counterpoint lines with the click of a mouse. Eventually these experiments will emerge into fully realized compositions for one of his many ongoing projects. The seeds of his Grammy-winning big-band recordings, 2002’s What Goes Around and 2005’s Overtime, took root here. It’s also where his new octet project, Pathways (Dare2), had its beginnings.

With a desktop Mac up in his workroom and a Mac laptop loaded with the same music-copying program (Finale) and sequencing program (Logic) he has at home, Holland is always ready to document his ideas, whenever and wherever they may hit. Whether in New York or in some hotel on the road, he can easily mock up the individual components of his quintet, sextet, octet or big band using a digital keyboard, sequencer and a couple of other modules. For him, it’s far more effective than the old-school method of score paper and pencil.

“I’m a writer that likes to hear back what I’m writing,” he says. “Some writers can just write it on the paper and that works for them. They can hear everything in their head without hearing the feedback from a keyboard or something. But I like to have that, and it helps me in my writing. I have limited keyboard skills so the sequencer allows me to program things that I couldn’t possibly play on the piano on my own. And the counterpoint stuff, of course, when I write it I can hear it back right then and make decisions about if I want to change things or not. It’s all become part of the compositional process for me.”

That process has led to brilliant and exhilarating compositions, two of which appeared last year on Live at the 2007 Monterey Jazz Festival (MJF) by the Monterey Quartet, a supergroup featuring Holland, tenor saxophonist Chris Potter, pianist Gonzalo Rubalcaba and drummer Eric Harland. (That band, with Jason Moran on piano instead of Rubalcaba, performed in 2009 as the cooperative Overtone Quartet.) Even more of Holland’s superb compositional work appears on Pathways.

“Sound-wise it represents a grouping I always loved that Ellington sometimes worked with-smaller ensembles with three reed instruments and two brass instruments,” says Holland. “Sometimes it would be added to or taken away from, but the basic idea was a five-horn frontline. With that grouping you have a big variety of combinations of instrumental sounds. You can get the effect of a big band but also have the intimacy of small group things, so it gives you a big range of compositional approaches that you can use. So that’s one of the reasons why I took it on as a musical project, to explore that sound. And, of course, to enlarge the quintet and to give the quintet another setting within which to function.”

Over the course of being a bandleader-he formed his first working group, a quintet, in 1983-Holland has consistently featured strong individual players and improvisers in his groups. His latest octet is no exception. “That’s always been a thing for me,” says Holland, “to find and to choose musicians who’ve really got their own voice but at the same time have this ability to really work as part of a musical community and work together, and these gentlemen in the octet are great at that. For me, it’s really a balance between strong individual voices and a group sound. And I’m very sure we’ve accomplished that with the band. All the musicians are ones that I’ve been involved with for some time, and we’ve been developing this music in various formats.”

Everything about Israeli-born tenor and soprano saxophonist Eli Degibri is a celebration. You can hear that in his sideman gigs with Herbie Hancock and Al … END_OF_DOCUMENT_TOKEN_TO_BE_REPLACED

It’s a cold March Friday night in New York City, but the crowd inside the Village Vanguard crackles with warmth as it engages with the … END_OF_DOCUMENT_TOKEN_TO_BE_REPLACED

When you hear tenor saxophonist Mark Turner’s name in conversation, it seems to be frequently linked to the notions of mindfulness, precision, and fastidiousness. “That … END_OF_DOCUMENT_TOKEN_TO_BE_REPLACED

Jazz films have a tendency to let you know that they’re very much about jazz. The medium—and the clichés associated with it—can become a hook … END_OF_DOCUMENT_TOKEN_TO_BE_REPLACED