Skip to content
Become a member and get exclusive access to articles, live sessions and more!
Start Your Free Trial
Home > Features > Dave and Iola Brubeck: At Home 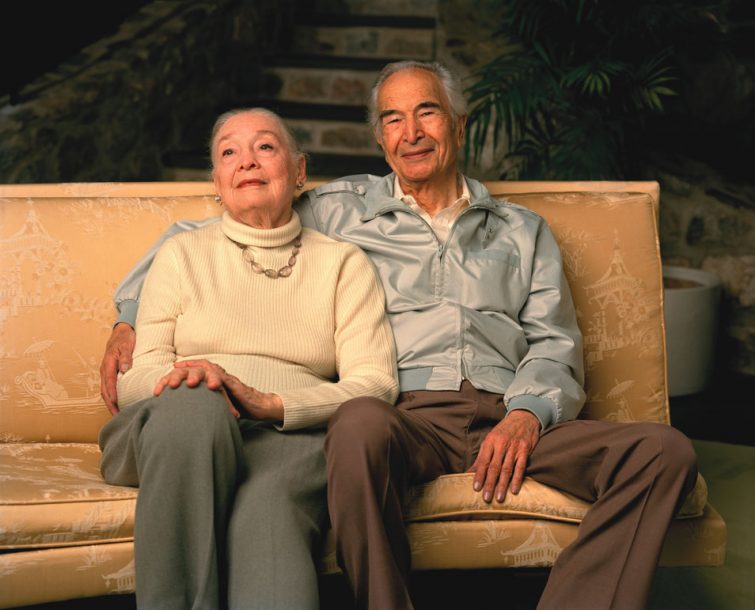 Unless your visit to the spacious and spectacular Wilton, Conn., home of Dave and Iola Brubeck takes you to the back rooms that most guests never have reason to see, you’d miss it. So when your eyes happen to gaze upon a particular piece of art hanging on a wood-paneled wall near a staircase, you can’t help but do a double take.

“I guess you recognize that painting,” says Iola, Dave’s soulmate since the day the couple met in Stockton, Calif., shortly after the dawn of World War II.

What jazz fan wouldn’t? There in an obscure corner of this house so filled with history is the original Neil Fujita artwork used for the cover of the Dave Brubeck Quartet’s landmark 1959 Time Out album. The abstract is nearly as iconic as the music-“Take Five” and “Blue Rondo à la Turk” both premiered on this, jazz’s first million-selling LP-and it looks even more vibrant in this context, considerably larger than the square-foot cardboard canvas on which so many first saw it.

But at some point during a conversation with the Brubecks it strikes you as ironic that the piano giant’s most famous creation bears the name it does, because one thing Dave Brubeck never does is to take time out. Even at age 87, he and the former Iola Whitlock, his bride of 65 years-engaged on their first date, their marriage itself is now old enough to collect Social Security-are constantly working. This year’s touring and recording plans are already locked down, and a question about retirement is met with a bewildered look.

“This’ll be a very short interview if we’re gonna talk about spare time,” Dave says as we sit down to chat.

He has just moments ago extricated himself from a workroom where he was composing a new piece. Iola still handles much of Dave’s day-to-day business.

But on this December afternoon they have other business as well: Soon they will be packing up for their annual winter stay in Sanibel Island, Fla., where the extended Brubeck clan-Dave and Iola did find time to raise a daughter and five sons, four of them professional musicians-will gather for Christmas, grand- and great-grandkids included.

The holiday may be as close as they come to getting rest, however. “People think it’s a vacation,” says Dave, “but we go down there and work from morning till midnight. We’ll never finish what is unfinished.”

While they look forward to the southern warmth, they admit it’s often difficult to leave Wilton. Dave and Iola moved here 45 years ago, long before Fairfield County was regularly listed as one of the wealthiest places in the United States. From the road the home doesn’t look like much, but once entered, the interior-three stories filled with treasures and personal memories-is a visual feast.

Designed by California architect David Thorne, who had built the Brubecks’ previous home in Oakland, Calif., the sprawling Wilton palace looks out through a series of Japanese-inspired sliding glass doors at more than 20 acres of pristine beauty. “He brought with him a lot of that California influence,” says Iola about the architect. Two streams, surrounded by tall trees and meadows, flow downhill and converge in a pond, over which a bridge leads to a small island retreat where Dave often composes. Wild turkeys, turtles, fish and even coyotes sometimes listen in. When the Brubeck kids were young, they had all the space they needed to sled and play football.

“We just loved the land and the beauty of the streams,” says Iola.

“Those rocks out there,” adds Dave, pointing to a cluster of large jagged boulders in the stream, “were the reason we bought this land.”

The imposing main wall of the cavernous living room is erected from stones found on the land, taken from fences that kept the livestock in place when a dairy farm operated here, before Dave and Iola bought the property.

“Just what the glaciers left behind,” says Iola about the stones.

Nature was second nature to the couple when they chose this setting for their home. Both were raised in central California, where Dave spent his youth helping his father run the family’s 45,000-acre cattle ranch. Dirt poor at first, the couple struggled until fame found Dave in the early 1950s.

“I’m embarrassed at what I put my wife and my kids through,” says Dave. “A cabin with no floor, just dirt, and no toilet facilities. I would wash the kids in a stream. That was a low period. We were broke all the time.”

Their present home, of course, reflects a half-century of international recognition, but they remain humble, proud and good-natured people. There are no airs about them as they explain the origins of the paintings, sculptures, tapestries, collections and antique furniture acquired throughout the world. Asked about the dozens of awards displayed, the old family photos, the many keyboards that are fixtures throughout the house (including one on a portable platform over their bed), Dave and Iola expound happily.

But they never lose sight of what their lives are about. There are no high-def TVs, only vintage sets, because they rarely stop long enough to watch a program. No state-of-the-art sound equipment, because there’s no time to listen. Bookshelves are few because most of their reading is confined to airplanes. Movies? Haven’t been to one in years.

The Brubecks didn’t get to be such healthy senior specimens by sitting around all of the time using their brains though. Both Dave and Iola have always been, and remain, avid exercisers. Until recent years Dave walked five miles daily and Iola kept up with him. Despite a triple bypass several years ago, he hopes to get back up to a mile and a half a day in Florida. Here in Wilton there’s a pool and an exercise room downstairs-and a ping-pong table that has fallen into disrepair.

And there’s an exercise bike, with a portable electronic keyboard above it so Dave can play while he sweats. “Every room is a workroom,” reminds Dave.

“This is a music factory,” confirms his wife.

“It isn’t a bad place to practice, looking out the window,” Dave says. “It’s one of my favorite places to go.”

On Frank Zappa: “You don’t want to be putting down rock musicians when you’ve got guys like that. I respected him.”

“One morning I woke up and I heard somebody playing Beethoven on my piano, by memory. It was a roadie for my son Chris’ band. I said, ‘My God, this kid who’s a roadie can play better classical piano than I’ll ever play.’ Just looking at these kids kind of turned me off but I started thinking, don’t judge people by their hair and how they’re dressed. Pretty quick I had long hair.”

On Liberace: “He could play. His technique was like iron, just clean and strong.”

A Political Statement, of Sorts

On a pair of hanging lamps in the living room:

Dave: “Iola, did I bring these from Iraq or Iran?”

Iola: “From Iraq but they’re falling apart, like Iraq is.”

It’s All About Who You Know

Dave: “There are great restaurants all around here. The Mediterranean [Grill] in Wilton is the one we go to the most.”

Iola: “That’s your favorite because they immediately bring you cushions for your back.”

In Praise of Collectors

Dave: “We’re always getting [unreleased recordings] that we didn’t know about, things that I had no idea were ever recorded. There are groups of guys that collect these things.”

Iola: “Thank goodness for them. There’s one great one with Gerry Mulligan and Dave.”

Dave: “You forget about it, and then you say, ‘That isn’t bad.’ I can’t believe that I played that well!”

Iola: “I was a stay-at-home mom until everybody was out of the nest. But I also worked with Dave. When he was traveling with our sons, I did all the booking for traveling and took care of the business. Some people give me credit for getting Dave started [playing on] college campuses. I don’t think it was that I was so smart. I like to eat!” Originally Published March 1, 2008

Put a “the” in front of a name and it acquires historical heft. The Thelonious Monk who entered New York City’s WOR Studios as Halloween … END_OF_DOCUMENT_TOKEN_TO_BE_REPLACED

On the enchanted evening of August 16, 1958, Ella Fitzgerald took to the stage of the legendary Hollywood Bowl. There, with a lustrous orchestra conducted … END_OF_DOCUMENT_TOKEN_TO_BE_REPLACED

Be careful what you wish for.  By the beginning of 2020 guitarist Mary Halvorson, one of the most acclaimed musicians of her generation, was also … END_OF_DOCUMENT_TOKEN_TO_BE_REPLACED

Guitarist Will Bernard bears the bittersweet blessing of virtuosic skill and eclectic taste, making his music a perpetual delight and yet hard to categorize. Maybe … END_OF_DOCUMENT_TOKEN_TO_BE_REPLACED