Skip to content
Become a member and get exclusive access to articles, live sessions and more!
Start Your Free Trial
Home > Features > Dan Tepfer: “One of the Guys We Talk About” 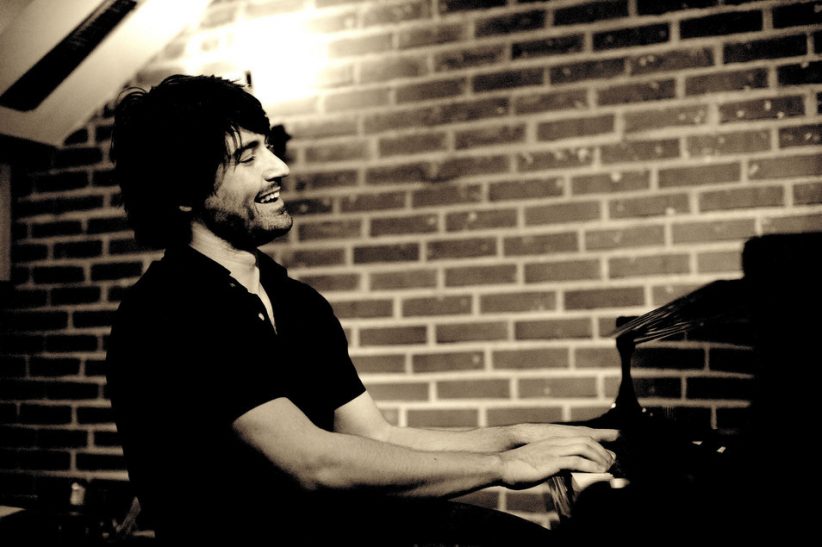 During Winter Jazzfest in January, at Zinc Bar in Greenwich Village, Lee Konitz improvised with the Harlem String Quartet. Violins wove a nettlesome drone, smoothed out by viola and cello, while the alto saxophone legend emitted short-but-full phrases in his trademark cool tone. For the moment, however, the man responsible for most of the sounds was unheard.

Dan Tepfer, the 30-year-old pianist who shared billing with Konitz, was actually creating the music that the strings were performing: improvising on a MIDI keyboard that silently sent the notation he played to screens for the quartet, music they read and played back in real time. The effect was something like Cyrano de Bergerac writing Christian’s letters to Roxanne: Even playing off the sound of the Harlem String Quartet, Konitz was ultimately improvising with Tepfer.

Such experiments are possible, says the pianist, because the octogenarian Konitz treats him as a peer rather than a protégé. “It really has never felt with Lee like I was just at his service or something like that,” he says. “He’s getting a lot from me, too. It feels very much like a collaboration.” That Tepfer can plot exchanges like the one at Winter Jazzfest is undoubtedly the catalyst.

“Dan is a good man, a good colleague,” says Konitz. “When I first played with him, what drew me in was that he was interested in what I was doing, too.”

Since his arrival in New York in 2008, Tepfer has become one of the most in-demand pianists on the scene, an object of increasing attention from critics, audiences and fellow musicians. He has other duet projects with multi-reedist Ben Wendel (their joint Sunnyside recording, Small Constructions, debuted in March) and bassist Gary Peacock (they recorded together in February) and is a busy freelancer. He has also led his own trios, and won acclaim in 2011 for his solo recording, Goldberg Variations/Variations, in which he both performed Bach’s iconic work and used it as a basis for improvisation.

“Variations/Variations is a tour de force of the classical repertoire and improvised music,” says Brad Linde, a Washington, D.C.-based saxophonist and presenter who works with Tepfer in both capacities. “It’s seamless, the way he interprets it.”

Tepfer was born and raised in Paris, the son of an opera singer and grandson of a jazz pianist (his maternal grandfather, Chuck Ruff, who lived in Eugene, Ore.). He began playing piano when he was 6, and his grandfather, Tepfer says, was a particularly powerful influence, despite living in the States and dying when Tepfer was 10. The very fact of him made a difference. “I think just having the example in my family of somebody who made music up was the most important thing for me,” he muses. “The classical teachers I had at the conservatory in Paris would try to discourage me from improvising. But since I knew my granddad did it, I knew it was OK.”

As he grew more serious about jazz, Tepfer saw the music’s homeland as his ultimate destination. He first went to Edinburgh, Scotland, earning a degree in astrophysics; for his master’s, though, Tepfer enrolled in the jazz program at New England Conservatory in Boston.

In NEC’s genre-crossing atmosphere, Tepfer explored the intersection of jazz and classical that had surrounded him his entire life, injecting a sense of modern classical harmony into his pianistics. “I’m a big fan of Olivier Messiaen and the kind of harmony that he got into,” Tepfer explains. “And I’m also hugely into György Ligeti; his harmonic vocabulary is very intricate and dissonant in many ways, but also always using the idea of tonality.” At the same time, however, he studied with Danilo Pérez, who trained him in the primacy of rhythm in jazz, and commuted from Boston to New York for lessons with Fred Hersch. Tepfer’s senior recital at NEC combined jazz piano with a string quartet and a mezzosoprano opera singer.

Tepfer’s classical-meets-jazz foundation continues to color his music. It was the seed of his duo project with Wendel, who is also the son of an opera singer. “I definitely think there’s this common link between us in terms of our depth of knowledge of classical music and how we approach writing in that way,” he says. “There’s sort of a classical aesthetic running through [Small Constructions]. We did a piece by Handel; there’s another tune of Dan’s called ‘Gratitude,’ where I layered a lot of instruments in sort of an orchestral texture.”

But Tepfer’s experimental tendencies also have a profound effect, Wendel adds. “I tend to be somewhat more of a ‘stick-with-one-idea-throughout-the-piece’-type person, whereas Dan has more of an ‘X-factor’ thing. He’ll go these different directions that I wasn’t expecting, and I think the push-and-pull of those two approaches brings some depth to how we play together.”

Tepfer’s most frequent work has been with piano trios, such as the one (with bassist Thomas Morgan and drummer Ted Poor) that made the lauded 2010 album Five Pedals Deep. But he feels Goldberg Variations/Variations marked a turning point in his musical development-perhaps a definitive one. “Right now I’m kind of taking a little break,” he says. “I feel like I’ve grown a lot as a musician, in part because of the Variations. I really wanted to rethink my approach to the trio, and figure out how I can bring what I’ve learned to it.” He hopes for new trio recordings either in the fall or in early 2014.

Regardless of the project, his co-conspirators have great expectations. “I think Dan’s one of the most important new voices on piano,” says Linde. “I think he’s gonna be one of the guys we talk about like Brad Mehldau and Jason Moran. And he’s coming at it with total originality.”

Guitarist Will Bernard bears the bittersweet blessing of virtuosic skill and eclectic taste, making his music a perpetual delight and yet hard to categorize. Maybe … END_OF_DOCUMENT_TOKEN_TO_BE_REPLACED

At 95, Chicago-based guitarist George Freeman is among the world’s oldest active jazz musicians. Although he came of musical age in the 1940s and counts … END_OF_DOCUMENT_TOKEN_TO_BE_REPLACED

When you’re on TV, everybody knows you, or at least thinks they know you. Take Kevin Eubanks, who was on NBC’s Tonight Show five nights … END_OF_DOCUMENT_TOKEN_TO_BE_REPLACED