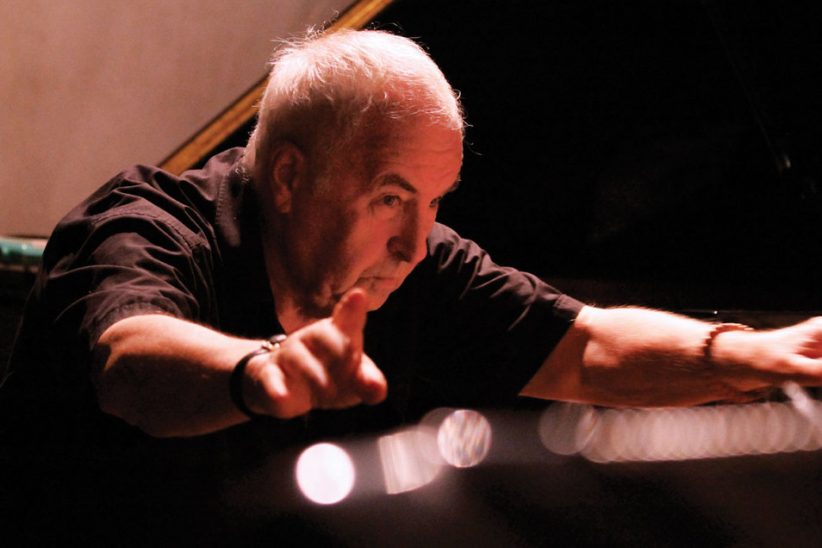 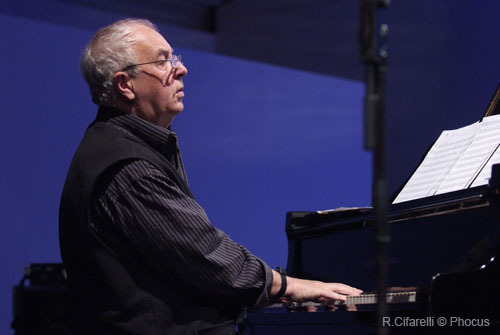 Are you hot enough?” Karl Berger asked the nearly two dozen musicians packed sweatily into the cramped confines of The Stone one humid Monday night last August. From across the room Berger’s wife, vocalist Ingrid Sertso, cheekily countered, “Maybe we should all play naked.”

The clothes stayed on for the remainder of this particular performance, but in a sense any project in which Berger takes the helm involves playing naked. As a disciple of Ornette Coleman’s harmolodics, as a sideman for Don Cherry’s early ventures into the fusion of jazz and world music, as the eccentric visionary behind the Woodstock-based Creative Music Studio, and now as mastermind and conductor of the Stone Workshop Orchestra, Berger has practiced and encouraged the art of opening oneself to the immediate, shrugging off preconceptions in order to hear the options inherent in the here and now. “I tell them two stories over and over,” Berger, 76, says during dinner a few blocks away prior to the performance. “The first one is about Ornette Coleman, who once in a rehearsal was approached by a musician who said, ‘Ornette, what do you want me to play on this piece?’ And Ornette said, ‘Play what you feel.’ Then he played and Ornette stopped him and said, ‘That’s not what you feel.’ This is a very important point, because a lot of musicians go on automatic.

“The other story is that I read in the paper that 16-bit recording, CD quality, recognizes 160,000 shades of dynamics. Twenty-four-bit recording, DVDs, recognizes more than 12 million shades of dynamics. Now, how many do we recognize? There are thousands and thousands of overtones vibrating in every note you play, so every note is new. If you make a contribution to a sound, your choices are infinite; it’s like a heap of ants being activated every time you play. So you’re never going to ever repeat a note in your entire lifetime.”

Founded in April, the Stone Workshop Orchestra is built on a foundation of that same naked freedom. Every Monday night, the ever-changing ensemble opens the East Village club’s doors for two sets: the first is a 75-minute rehearsal, the second is a performance of the material just rehearsed. There is no written music. Berger spends the rehearsal period instructing the gathered musicians to construct monolithic slabs of harmony and teaching them a few themes by ear, including pieces by himself, Coleman or Cherry, and Turkish or African traditional tunes. An hour later, those scant materials are transformed into three roughly 20-minute suites full of free improvisation conducted by Berger. “I’ve always been involved with situations where there was either written music on paper or totally free improvisation,” says trumpeter Herb Robertson, a frequent member of the orchestra. “Karl’s approach gives me the opportunity to get out of the ruts that I get into. I also like playing with these younger musicians who have a lot of creativity. You really have to edit yourself down and make everything count. We’re not up there trying to prove anything, we’re up there just trying to create music with everybody.”

Just like the music, the configuration of the orchestra is never the same from week to week, with more traditional jazz instrumentalists sharing the stage with mandolin, accordion, harmonica and all manner of exotic percussion. Drawing from a diverse pool of about 40 musicians, Berger makes choices via e-mail during the week as to who can show on the next Monday. “I control mostly the guitars, basses, drums and saxophones, because there’s an overload in those areas,” he says. “Everyone else who’s been there can come back or not and I’ll let myself be surprised.”

That’s a challenging approach to running a big band, and it’s an even more counterintuitive way to run a school. Yet the Creative Music Studio thrived in Woodstock, where Berger and Sertso still live, from 1971 until its perhaps inevitable demise in 1984. It was equal parts music conservatory, hippie commune, summer camp and Buddhist retreat.

During those years, a who’s who of the era’s most inventive musical minds passed through the school’s idyllic setting and imparted their wisdom to a younger generation in an extremely open environment. The list of “guiding artists” includes Cherry, Anthony Braxton, Dave Holland, Cecil Taylor, the Art Ensemble of Chicago, Allen Ginsberg, John Cage, Jimmy Giuffre, Babatunde Olatunji and countless others. “The CMS is a concept, a framework like the AACM, in which things can take place,” Berger explains. “It was more of an experimental place than a school. Schools are hampered by the quantification that is needed, with credits and so on, and all these elements that we were talking about are elements that aren’t quantifiable.”

A half-century ago, pianist and vibraphonist Berger was playing standards in his native Germany, when he heard Ornette Coleman’s This Is Our Music and decided he had to trace this new music to its source. Arriving in Paris, he and Sertso almost immediately chanced upon Don Cherry, whom they recognized from the album cover. By the following day, Berger was playing in Cherry’s band alongside Gato Barbieri, Jenny Clark and Also Romano. “Don Cherry walked around with a shortwave radio,” Berger recalls, “and whatever he heard that afternoon, that’s what we played that night: Brazilian songs, Turkish songs, Indian, African, whatever. The whole concept of all music being one, which was the basis of CMS, started with Don Cherry. He was the quintessential CMS musician.”

Students who profited from their experience at CMS include Peter Apfelbaum, John Zorn, Marilyn Crispell and flutist Sylvain Leroux, who arrived in 1978 at the age of 22 from Montreal. “I had a mind-exploding experience there,” Leroux recalls. “I was interested in jazz but my outlook was more traditional. But when I got to CMS, the first week there was Wadada Leo Smith, the second week was Don Cherry, then Oliver Lake, Steve Lacy, Frederick Rzewski, Carla Bley. By the third or fourth week all my concepts were exploding in all kinds of directions. It was a life-changing experience, to say the least.”

Leroux has maintained a relationship with Berger over the intervening decades, and is now a regular at Stone Workshop Orchestra gigs. “Karl is a very subtle person,” says Leroux. “He doesn’t dictate, but he suggests. He’s a philosopher, a very educated man with a brilliant mind, and he has a way of speaking where he just lights up your mind. He’s a bit of a Zen master for me.”

Berger’s gift for obtaining results through abstract suggestion was fully on display at The Stone that evening. One piece should have the feel of “a cinema-noir theme-think Paris and gaslight.” At one point, trying to evoke more passion from the trio of violinists in the ensemble, he told them, “Pretend you’re in front of a judge and whatever you say determines whether you go to jail or not.”

Still, one never gets the sense from Berger that perfection is the goal, or even necessarily desirable. A “mistake,” if it can be referred to as such, is just one more moment in time, progressing from the last sound and ceding way to the next. “Every performance is the end goal,” he asserts. “I’m not thinking in progressive terms, I’m thinking in terms of this hour, what’s happening here. That needs to have a sense of complete focus and also a sense of communication. I enjoy each and every evening as its own piece, and it turns out that they’re completely different every time.”

Ted Orr is currently in the process of confronting the challenges inherent in such imperfect methods. The composer and audio engineer is undertaking the effort to remaster and digitize more than 400 tapes of performances from CMS. The recordings will be archived at Columbia University, which recently hosted a symposium on the CMS and is also initiating an oral history project that will gather the stories of artists and students alike. Innova is planning to release a series of compilations culled from the tapes.

Like so many others in the CMS circle, Orr stopped by out of curiosity and stayed far longer than expected. The first person he met was a bassist who was working in maintenance and got Orr a job doing the same; he later moved into the kitchen and worked there for five years while studying. He remembers many of the sessions captured on the CMS tapes, has helped Berger move them more than once, and is now attempting to counter the amateur recording conditions and less-than-ideal storage circumstances. “I remember one guy making a fade-out on Cecil Taylor,” Orr says, obvious horror in his voice. “Little did I know that 30 years later I would undo that fade-out. Every single one of them is a gem, so for me it’s a huge pleasure to work on them. Just listening to them is an awesome learning experience.”

Berger is eternally hopeful that CMS will return in one incarnation or another, all dependent on financing, but the idea’s resurgence in recent years is encouraging. For now, he’s concentrating on the Stone Workshop Orchestra which, apropos of CMS, is extending its initial three-month run through the end of the year. He would also like to take a few core members on the road and integrate them with local musicians at each stop, spreading the orchestra’s spontaneous concept even further.

Guitarist Will Bernard bears the bittersweet blessing of virtuosic skill and eclectic taste, making his music a perpetual delight and yet hard to categorize. Maybe … END_OF_DOCUMENT_TOKEN_TO_BE_REPLACED

At 95, Chicago-based guitarist George Freeman is among the world’s oldest active jazz musicians. Although he came of musical age in the 1940s and counts … END_OF_DOCUMENT_TOKEN_TO_BE_REPLACED

When you’re on TV, everybody knows you, or at least thinks they know you. Take Kevin Eubanks, who was on NBC’s Tonight Show five nights … END_OF_DOCUMENT_TOKEN_TO_BE_REPLACED