Skip to content
Become a member and get exclusive access to articles, live sessions and more!
Start Your Free Trial
Home > Features > Colin Stetson: The Man-Machine 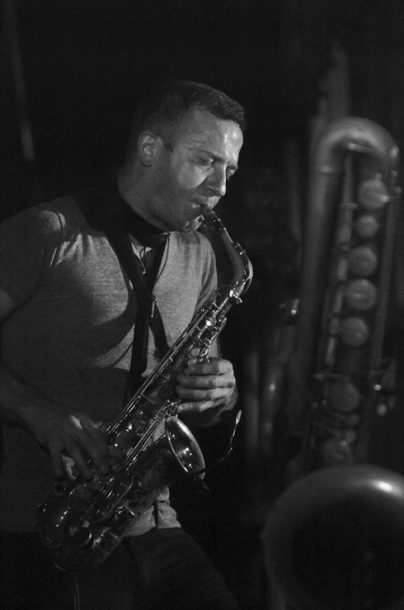 Colin Stetson in performance at the 2012 Guelph Jazz Festival

When Colin Stetson plays the saxophone, he’s hawking faith in super-human powers. He wants you to marvel at his individual athletic achievement, sure, but only after you’ve forgotten-at least for a moment, while you hung inside the sound-that it was the work of just one man and his acoustic instrument.

The 38-year-old saxophonist has just released New History Warfare, Vol. 3: To See More Light (Constellation), the last of three albums of mostly unaccompanied, single-take performances. On them he plays alto, tenor and bass saxophones, employing the mystifying technique of circular breathing almost without abatement. And there’s a concept: Each of the records represents a different stage in the evolution of life and consciousness, from birth to death.

By now, this is starting to sound a little gimmicky, and if you’re of that mind, his work with Bon Iver and Arcade Fire-two of the most popular indie-rock bands out there-might deepen your suspicion. (Bon Iver’s frontman, Justin Vernon, sings on four of the new album’s tracks, and his performances are the project’s only overdubs.) But Stetson is incontestable; he can’t be moved or denied. His music grips you with its corrugated tone, its sternly whirling arpeggios, its tongue slaps reverberating like mortar fire. “Whenever I’m practicing, I have this idea that you’re playing to the rafters, you’re playing to the bones of the building, and you’re trying to soak every last inch with the sound,” he says. Think of the your-body-is-a-temple metaphor. He wants to float in through the window of the ears, and make your body shudder like panes of glass.

Stetson grew up in Ann Arbor, Mich., and started out on alto saxophone at age 10. By his senior year of high school, he was playing soprano, tenor and baritone, plus clarinet, bass clarinet and flute. He earned a scholarship to attend the University of Michigan, and before he matriculated he was already an honorary member of the college’s Creative Arts Orchestra, an improvising new-music collective.

At school, Stetson joined three other undergrads to form the band Transmission, a layer cake of funk, free jazz and slogging rock. Stetson graduated in 1997, and moved with the group to the Bay Area. Transmission slimmed down to a sax-bass-drums trio, and in 2002 released Tiny Beast. The record hardly feels lean; it’s an early example of Stetson’s ability to fill inordinate amounts of atmosphere with a staticky, ricocheting tone. The band bled across genres, and word of Stetson’s virtuosity seeped into various crannies of the region’s alternative-music scene. He picked up some major gigs, recording with his longtime idol Tom Waits and the indie acts Beulah and TV on the Radio.

Then he joined Arcade Fire in 2007 as a touring and recording member, and the following year enlisted with Bon Iver. Arcade Fire showed him something about “the power of songwriting, of simplicity: getting right at the heart of what is necessary to move the people who you’re playing for, to move the air around you.” Stetson says he plays a more direct role in shaping Bon Iver’s music, which has taught him a more internal lesson. “There’s an aloneness that’s very intrinsic to his voice and the way he offers it up,” Stetson says of Bon Iver’s Vernon. “It’s inclusive isolationism-you feel you’re in some sense voyeuristic, peering into his experience and making it your own.”

Stetson sees his own image in Vernon’s vocals. “It’s important to every thinking, breathing animal, that singular point of view and existence in the world, regardless of your physical isolation from others,” he says. “It’s something that I’ve spent a lot of time with, and I like to explore.”

But if Vernon’s falsetto is a call for empathy, Stetson looks you in the eye, without irony or pathos, expecting something else. His whole gambit is a denial of the strain you know he’s really under, be it physical or emotional.

As a solo saxophonist, Stetson belongs to a tradition that counts Western minimalism and jazz as equal influences. His forebears are Peter Brötzmann and Evan Parker and Anthony Braxton, saxophonists who posited the undulations of timbre and screech as a sort of proxy for melody.

Stetson, like them, is an expansionist in a minimalist’s guise, pulling dimensions from his instrument that go beyond the manipulation of tone and sonic curve. To reverse-engineer the electronic sounds of his generation, he goes back to La Monte Young and Terry Riley-early electronic minimalists who saw potential in ritualistic repetition with unsanctified devices-and builds out.

Stetson looks at electronics differently than Riley; there’s the leeriness that comes with arriving a few decades down the line. He knows it’s a confusing time when humans might think to imitate machines; when he renders the clacking of a lever by tapping his saxophone keys, some threat hangs right there on the surface. That’s where he diverges from Vernon, a sort of earnest, Thoreau-like hero to the iPod generation. They might both be interested in subjectivity, but with Stetson his heart isn’t on his sleeve; the captivation comes from trying to figure out where, and if, it is at all.

When you’re on TV, everybody knows you, or at least thinks they know you. Take Kevin Eubanks, who was on NBC’s Tonight Show five nights … END_OF_DOCUMENT_TOKEN_TO_BE_REPLACED

Jimmy Katz leads many lives. He is the preeminent currently active jazz photographer, and has shot more than 200 magazine covers and over 600 recording … END_OF_DOCUMENT_TOKEN_TO_BE_REPLACED

Take a look at Blue Note Records’ release schedule for 2022 and it’s hard to miss the significant percentage of electronic-oriented music. In March, the … END_OF_DOCUMENT_TOKEN_TO_BE_REPLACED