Skip to content
Become a member and get exclusive access to articles, live sessions and more!
Start Your Free Trial
Home > Features > Cole at 100: Not That Nat But This One

Little wonder that Nat King Cole is revered as one of the towering crooners of the recorded-sound era; he sang as if his lungs were lined with silk. An earthly balladeer whose voice always seemed to be flirting with contrails, he stands alongside a select few in the top tier of American entertainment icons: Elvis Presley, Marilyn Monroe, Louis Armstrong, James Dean, Babe Ruth. And of course we have “The Christmas Song,” in any one of four versions—go with the first, from 1946—which is as festal as wreaths and crèches, and probably more central to the holiday season for many.

I became a hardcore Cole guy in college, which is when I started to mull something that I thought needed redressing. When you’re known as a crooner, and enough time passes after you’re gone, you can become song-typecast, known only for a few indelible works. But as March 17 marks Cole’s 100th birthday, it seems a good time to venture back to the 1940s, before that pigeonholing process began, when he was one badass piano player with worlds in his fingers, leading one of the greatest small units in jazz history.

Jazz people have a tendency to overlook Cole. His rep as a pop singer—which is what he was for the bulk of his career—dominates our understanding of him. You will raise less eyebrows when you venture that there’s a direct connection between Cole and Sam Cooke (who must have listened to him a ton) than if you say that, in a small-band setting, he deserves to be ranked with Armstrong, Count Basie, and Thelonious Monk.

In addition to Cole on piano and vocals—and handling the arranging—the Nat King Cole Trio comprised Oscar Moore on guitar and Johnny Miller on double bass. Moore could flat-out smoke at mid and slow tempos, an apparent oxymoron that you wouldn’t think possible until you heard him accentuate one of Cole’s piano licks. They were like a slowed-down but no less driving version of Chuck Berry and Johnnie Johnson at top fettle. What I love about Moore’s guitar is its lubricity. There was oil in this sound, but good oil, like what you see drifting into pleasing patterns atop your fresh cup of coffee. That oil only comes from the blues, and blues is a long way, usually, from crooning. 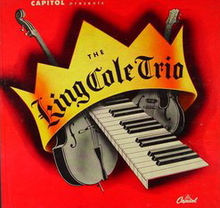 Capitol released a four-volume set of 78s by the band, cut in the second half of the ’40s, called simply The King Cole Trio; King Cole Trio Vol. 2; King Cole Trio, Volume 3; and King Cole Trio, Volume 4—no further titular elucidation was needed when you had music like this. We all have our favorite small combos, which we rate and reorder in our heads. Mine is, at this moment, Andrew Hill’s band for Point of Departure, but this Cole unit is always tussling for a top-five spot.

Note how much swing Cole immediately instigates on “This Way Out,” before Miller’s bass starts its jaunt of a ride underneath him. The arrival of Moore is like a fretboard-based annunciation, a piercing—but warmly so—single note with a dash of distortion. He is Lowman Pauling of the “5” Royales before that genius set about his business of reinventing the electric guitar’s possibilities. 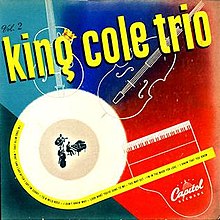 We might ask why this band has been overlooked. I don’t think it’s merely on account of Cole’s pop singing; it has to do with his style of pop singing, and its great sense of refinement. If we again turn to Sam Cooke as a comparison, Cole was closer to Sam Cooke at the Copa than Live at the Harlem Square Club, 1963; the former wasn’t necessarily genteel, but it was lightyears away from the earthen R&B of the latter.

Due in part to the gravel in his voice, Louis Armstrong—and I’m not saying there is anything fair about this—was seen as more of an endemic jazz artist. A black singer who had less of an earthy quality was going to be treated as pop. You see something similar with Chuck Berry, who was more of a rhythm & blues artist in the mid-’50s than a rock & roll one, but discussion of him always leaned heavier on rock, given that if you heard him on the radio back then, you easily could have thought he was white. 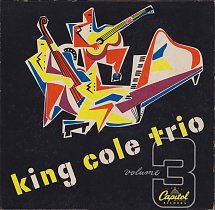 Listen to how Cole’s voice slides up and down the melody line in “If I Had You.” Mose Allison would do the same thing years later, which resulted in his being called eccentric. The difference? Cole has more finesse; singing is just easier for him. There is a broad tessitura required to sing this song, but there’s also a demand on the piano and guitar to back the voice, go where it goes, slide when it slides but ever-so-slightly-preliminarily, to be there to await it, then send it on its way. I’ll go so far as to say that no guitarist and pianist/singer ever interacted with greater felicity than Moore and Cole. 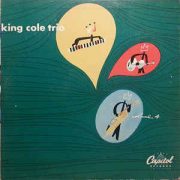 Almost everyone who plays “Route 66” feels a need to press musical pedal to the metal and remind us that if their performance were a make of sports car, it would be an Allegro. Cole and his mates had no need for such freneticism in their 1946 rendition. Their ride is the roadster that passes all other cars without seeming to be in any hurry. It’s almost like watching Wayne Gretzky in old hockey clips; he never appears to be moving that fast, yet nobody ever catches him from behind.

This is blues-pop worthy of the Hot Fives and Sevens, proto-soul, pre-Sam Cooke deep-night balladation by way of Lowman Pauling, the road song as jazz chamber music. Maybe that was the trick of this car—it was always going up, rather than laterally. Your esteem for Cole will do much the same if you spend a little time with a combo that deserves a prime spot on your jazz record shelf.

Several years ago, one of Danilo Pérez’s students was suffering from tendinitis. Pianist Pérez was then a professor at the New England Conservatory; his student, … END_OF_DOCUMENT_TOKEN_TO_BE_REPLACED

As a JazzTimes writer, I can talk about the powers of a dynamic drummer until I’m blue in the face: the weight of each tom-tom’s … END_OF_DOCUMENT_TOKEN_TO_BE_REPLACED

There are certain works of art with which I wish I could have a conversation, so that I might express my gratitude for them. I … END_OF_DOCUMENT_TOKEN_TO_BE_REPLACED