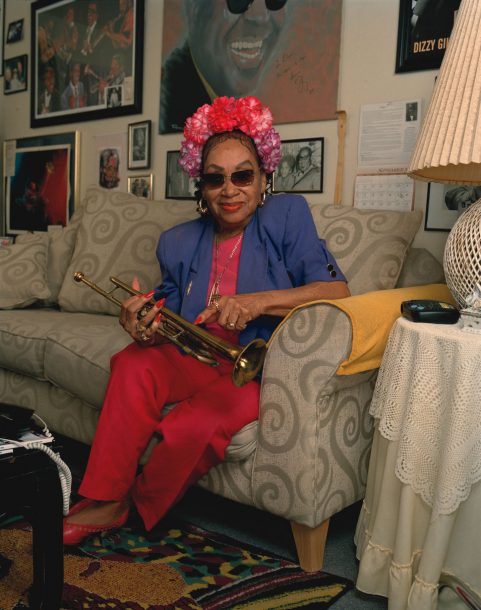 A little more than a week after she suffered a heart attack, Clora Bryant is characteristically full of vim and vigor.

“They took me to the hospital Wednesday,” she says. “But they couldn’t keep me there. I was doing my thing, making them all smile when they came in my room. Just keeping the laughter and the good attitude going. I think that has a lot to do with why I’m still here.”

At 79, the world’s best-known female jazz trumpeter—she prefers “trumpetiste”—the woman who cracked a brass ceiling that is not yet completely undone, is very much still here, her warm, maternal image contrasting dramatically with her smooth-lacquered, flower-in-the-hair publicity photos from the ’50s. Living in a Crenshaw district apartment in Los Angeles, a bugle call away from where she spent most of her adult life, close by the still-resonant memories of the Central Avenue jazz scene, she is surrounded by ongoing projects: an autobiography that will be published as a paperback and as an audio book, complete with music and sound effects; a series of her one-on-one interviews with Dizzy Gillespie and numerous other veteran jazz artists; and a pair of children’s books.

“I’m still keeping musicians’ hours,” she adds with characteristically exuberant laughter, “up until 4 or 5 in the morning, working on all these things.”

Musicians’ hours, but not musicians’ activities. Because the only thing Bryant is not working on is her trumpet, which she was obliged to give up after undergoing quadruple bypass surgery in 1996. But she takes a reasoned view of its absence in her life. “The doctor made it pretty clear what my choices were,” she says, “so I did what I had to do. I knew there were a lot of other things I wanted to accomplish before I left.”

The combination of practicality and inner drive expressed in her comment has been a principal element in a 60-plus year career that has taken Bryant from all-female college bands in Texas to jam sessions with Dizzy Gillespie and Charlie Parker and an active career as a well-regarded side-person; from the perils of the Depression, a broken family and a predatory relative to the present day joys of a life surrounded by her four children, nine grandchildren and two great-grandchildren.

Strangely enough, Bryant has no recollection of having experienced any heat over the fact that she was a female who played the trumpet. “Never happened,” she says. “Nobody ever told me, ‘You can’t play the trumpet, you’re a girl.’ Not when I got started in high school and not when I came out to L.A. My father told me, ‘It’s going to be a challenge, but if you’re going to do it, I’m behind you all the way.’ And he was.

“Once I got on the scene, playing with big bands and small groups, I made all the jam sessions. At the Basket Room, the Jungle Room, the Downbeat, the Last Word. And in those places, it was all about how good you could play.”

Bryant, as her 1957 recording Gal With a Horn reveals, could play very well indeed, even in a setting primarily devoted to her vocals. Obviously impacted by her great admiration for Gillespie, she nonetheless modified that influence with a trace of Roy Eldridge’s rich emotional qualities. “I’ve always felt that the strongest part of my playing was the feeling,” she says. I always loved ballads because I could always get into them. It’s like Dizzy—and Louis—used to say, ‘It’s not the notes; it’s the feeling you put into the notes.'”

But it’s been a long, interesting trip nonetheless. Start with her gig with the highly regarded, all-female Sweethearts of Rhythm band of the ’40s. “I played with Sweethearts of Rhythm one week here in Los Angeles at the Million Dollar Theater,” recalls Bryant. “And they were a good band, with good charts. But I was too young to know anything about the gay thing. So when I saw some of the girls patting on each other and all that stuff, I went home and told my dad. And my dad made me come home on intermission and then go back. He wouldn’t let me hang around with them, no matter how good the music was.”

Other experiences were memorable for very different reasons. Like the time her idol, Louis Armstrong, caught her in the act of doing her Armstrong-style specialty. “It was in Vegas in 1960,” says Bryant. “Louis was working the big room at the Riviera, and I was in the lounge. He and [his wife] Lucille used to sometimes come in and sit in the back of the room to listen. Well, one night I was up there doing my act, doing Louis, when I heard this sound coming from the casino. And here comes Louis with his whole band, all of them. Even [drummer] Danny Barcelona with his sticks. They marched right up onstage and did my whole act, but for real. It was great.”

Bryant also remembers vividly the first time she heard the big band of Dizzy Gillespie, and the manner in which it recast her entire musical perspective. “I was playing a gig up in Caldwell, Idaho,” she says. “I had a shortwave radio and I heard this radio station from San Francisco. The deejay played Diz’s ‘Things to Come’ and sat there with my mouth open, trying to find one, the first beat in the bar. And when I told Dizzy about it later, he said, ‘Well, Clora, a lot of people couldn’t find one.’ And I wasn’t used to that. The music just came crashing out. It just blew me away!”

Bryant would eventually share a musical friendship, even a mentorship, with Gillespie that would last until the bebop great died in 1993. But her most memorable musical moment took place in the early ’50s at a jazz bistro in Hermosa Beach called the High Seas. “It was a Sunday afternoon, and it was always wild at the beach on a Sunday,” recalls Bryant. “They were trying to get Charlie to play at the club next door, the Lighthouse, but no one could get him to sit in. Then he came over to where I was playing, borrowed a new Selmer tenor from somebody, and said, ‘Well, what do you want to play Clora?’ And I said, ‘Now’s the Time.’ So I set the tempo like [she beats off a fast tempo] and everybody got really swinging.

“When we finished it, the piano player played the old Basie lick on the end. So Charlie said, ‘Hey, how about some ‘Tickle Toes’? I said, ‘Yeah, ‘Tickle Toes!?’ And Charlie counted it off like [beats off a much faster tempo], and he was flying. So when I started playing, I tried to double up the tempo like he was doing. And when we finished, he grabbed me by the arm and dragged me in the back. ‘Clora,’ he said. ‘You know I love you and I love the way you play. But don’t try to double up like that when you can’t do it!’ And then he gave me a big fat hug.

Parker’s image is one of many on the wall of memorable photographs in Bryant’s apartment. “One wall is for family,” she says, “one is mostly for Dizzy. The painting I have of Diz is something I had the artist do. I showed it to Diz once, and he thought I was going to give it to him. But I said, ‘No way. This one’s for me.'”

In 2002, she was awarded the Mary Lou Williams Women in Jazz Award at Washington, D.C.’s Kennedy Center. And a documentary by filmmaker Zeinabu Irene Davis, Trumpetistically, Clora Bryant, details Bryant’s life with rare footage from television shows and live performances, as well as scenes from her pioneering tour of the Soviet Union in 1989 (she was the first female jazz horn player to do so).

Bryant just chuckles when the honors and media interest are mentioned. “Wish they’d been around 40 years ago,” she laughs. She’s obviously pleased about the numerous requests for interviews and appearances. But she also insists upon placing it all in the context of the wisdom from her father.

“You know,” she concludes. “I’m really just trying to keep on living my life according to those little sayings that he kept repeating: Nothing ventured, nothing gained. Put a smile on your face and love in your heart, and you’ll make it.”

Recommended Listening
Clora Bryant’s lone leader session, Gal With a Horn: Clora Bryant/4, first released on Mode in 1957, was reissued by VSOP on CD in 1996. The trumpetiste also appears on blues singer Linda Hopkins’ How Blue Can You Get, available on CD from the Quicksilver label. Originally Published May 1, 2007

At 95, Chicago-based guitarist George Freeman is among the world’s oldest active jazz musicians. Although he came of musical age in the 1940s and counts … END_OF_DOCUMENT_TOKEN_TO_BE_REPLACED

When you’re on TV, everybody knows you, or at least thinks they know you. Take Kevin Eubanks, who was on NBC’s Tonight Show five nights … END_OF_DOCUMENT_TOKEN_TO_BE_REPLACED

Jimmy Katz leads many lives. He is the preeminent currently active jazz photographer, and has shot more than 200 magazine covers and over 600 recording … END_OF_DOCUMENT_TOKEN_TO_BE_REPLACED