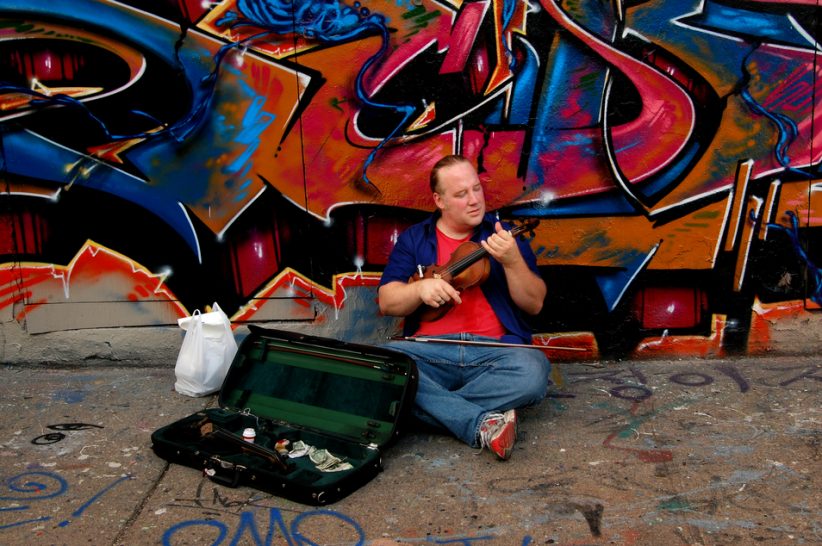 Christian Howes’ new album explores that transitional passage as music comes out of the blues and into jazz. The recording is called, aptly, Out of the Blue (Resonance), and the title track, a Howes composition, examines that journey in slow motion. When the 38-year-old violinist, his small brown fiddle tucked under his enormous square jaw, first played the tune at Baltimore’s An Die Musik Live! in November, it was as a slow blues with a slippery, syncopated rhythm and a suggestive vocal-like purr. But the second solo was something different: a slow hymn, all humble reverence and sustained tone. Howes seemed to be explaining how gospel music was the midwife that delivered jazz out of its blues womb.

That may not be true of music history in general, but it is certainly true of the violinist’s own history. Back in 1991, Howes had been a highly promising classical student at Ohio State University, seemingly on his way to a concert career. But he got caught up in a drug deal gone wrong and eventually found himself in Ohio’s London Correctional Institution. There he found himself so desperate to play music that he would try anything: He’d play violin with the young inmates who slapped out hip-hop beats on the picnic tables in the exercise yard, or he’d jam along with the old guys picking bluegrass. But he found his home in the prison church.

“It was a different kind of music making than I’d ever experienced,” Howes says backstage at An Die Musik, “because there was a different relationship between the musicians and the listeners. Gunther Schuller once said that the difference between Mozart and Charlie Parker was the difference between Abraham Lincoln and Richard Pryor. When Lincoln delivers the Gettysburg Address, he says what he wants to say and everyone else sits down and listens. When Richard Pryor is rapping, the crowd is talking back at him, arguing with him and egging him on. The same thing was happening in this church. The congregation was finishing the preacher’s sentences and joining in on every song.

“The first time I saw it, I said, ‘Wow, this is different.’ The second time I saw it, I said, ‘Yeah, this is cool.’ And when I started playing for those church services and people started standing up and cheering for me, I felt embraced like I never had before. Church music is the epitome of that interactive approach, what I call the blues. I realized that was the kind of music I wanted to play.”

It was a conversion experience. So in 1996, when Howes was released from prison after four years, he decided he didn’t want to resume his classical career; he wanted to continue what he’d been doing in the prison church. But he soon made another discovery: When he stuck to the 12-bar blues, he wasn’t able to use the considerable technique he had built up over years of classical study. When he played jazz, however, he could use those skills and still have a blues feeling.

“When I played in an R&B cover band,” Howes acknowledges, “I couldn’t call on all my technique. If I played in a classical string quartet, I wasn’t able to call on my love of the blues. But jazz allowed me to do both; it was the best of both worlds. I wanted to have the freedom to stretch out and be as expansive as I could be, and that’s not always easy in a strict 12-bar blues. The challenge is getting people to accept the violin as a jazz instrument and not just a novelty. Guys will hire you if they want a violin, but if they’re just looking for a frontline soloist, they won’t think of you.”

After prison, Howes spent five years in his hometown of Columbus, earning a degree in philosophy from Ohio State and playing in local blues and jazz bands. In 2001, he finally made the move to New York and soon landed gigs with D.D. Jackson, Greg Osby, Dafnis Prieto, Dave Samuels’ Caribbean Jazz Project, Spyro Gyra, Bill Evans’ Soulgrass and Les Paul, whose relationship with Howes began in the late ’90s. Before long, the violinist was leading his own bands, often with his favorite musicians from Columbus, and releasing a steady stream of albums that marked him as an heir apparent in the lineage of jazz-violin greats: a surprisingly rich ancestry that includes such giants as Stéphane Grappelli, Stuff Smith and Jean-Luc Ponty.

In 2008 he signed with Resonance Records and released the sumptuous Heartfelt with pianist-arranger Roger Kellaway. On his second project for the label he wanted to do something funkier, and the result was Out of the Blue, which covers repertory by artists ranging from Fats Domino to Chick Corea, Carla Bley and Ornette Coleman. The album’s guest, guitarist Robben Ford, had similarly bridged blues and jazz in bands led by Jimmy Witherspoon and Miles Davis. “I first met Christian when we were both working with Bill Evans at [Dimitriou’s] Jazz Alley in Seattle,” Ford recounts over the phone. “Christian was mind-blowing; he’s a straight-up virtuoso of the violin. It was ostensibly a jazz thing, but we were also playing blues and rock in that context, and it was astonishing to me what he could do in each setting. A guy like Christian, all they have to do is give him a stage and everybody is going to dig it.”

“Robben has proved that a blues instrument like the guitar can be accepted in jazz,” Howes says, “and I want to prove that a classical instrument like the violin can be accepted the same way. I want to prove that the whole idea of the violin as a classical instrument is a product of racism that puts European music way up there and African-American music way down here. When I was a classical violinist, I used to play with a long bow and a lot of vibrato, as if I were an opera singer trying to fill a big hall. But now I can scratch my bow or dig into the high G string or stomp on a distortion pedal. I want that growl that a saxophone gets.”

Howes ended the first set at An Die Musik with one of his old classical pieces, Paganini’s Caprice No. 24. He began with an unaccompanied display of the dazzling facility that had once made him a prodigy, sliding through the difficult intervals at blinding speed. But when his Columbus buddies-drummer Cedric Easton and bassist Dean Hulett-jumped in with a funky groove, the same phrases took on an entirely different feel. The tall, imposing bandleader with the red ponytail halfway down his back took that syncopated phrasing and those flatted notes and took off on a mesmerizing solo. He closed his eyes and smiled, as if he were back in the prison church.

When you’re on TV, everybody knows you, or at least thinks they know you. Take Kevin Eubanks, who was on NBC’s Tonight Show five nights … END_OF_DOCUMENT_TOKEN_TO_BE_REPLACED

Jimmy Katz leads many lives. He is the preeminent currently active jazz photographer, and has shot more than 200 magazine covers and over 600 recording … END_OF_DOCUMENT_TOKEN_TO_BE_REPLACED

Take a look at Blue Note Records’ release schedule for 2022 and it’s hard to miss the significant percentage of electronic-oriented music. In March, the … END_OF_DOCUMENT_TOKEN_TO_BE_REPLACED