Skip to content
Become a member and get exclusive access to articles, live sessions and more!
Start Your Free Trial
Home > Features > Charles Lloyd: Into the Wild 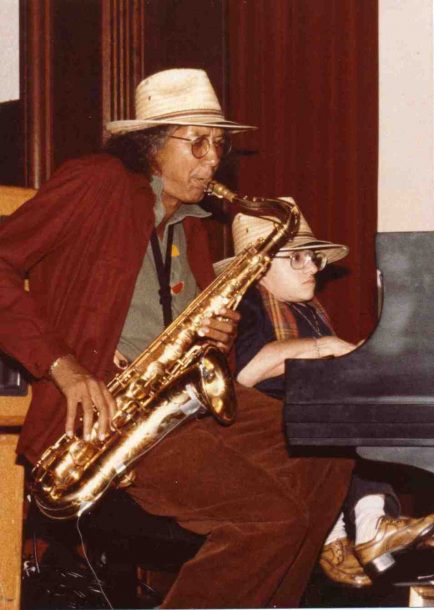 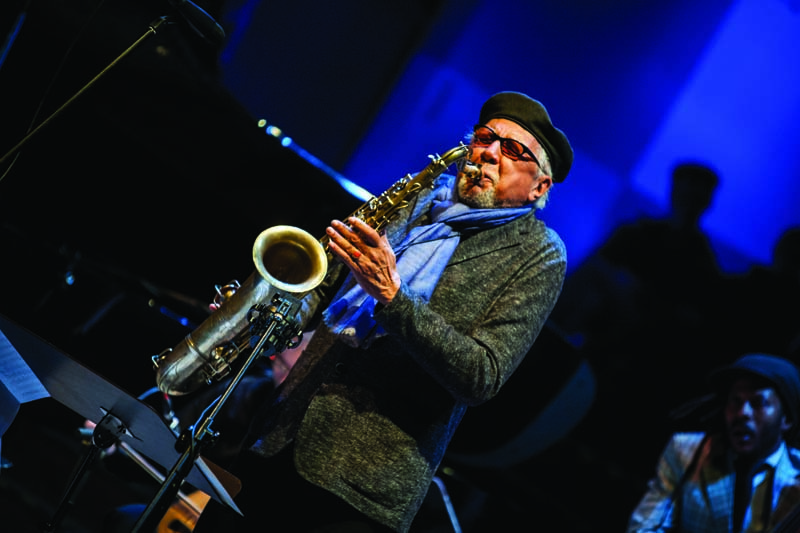 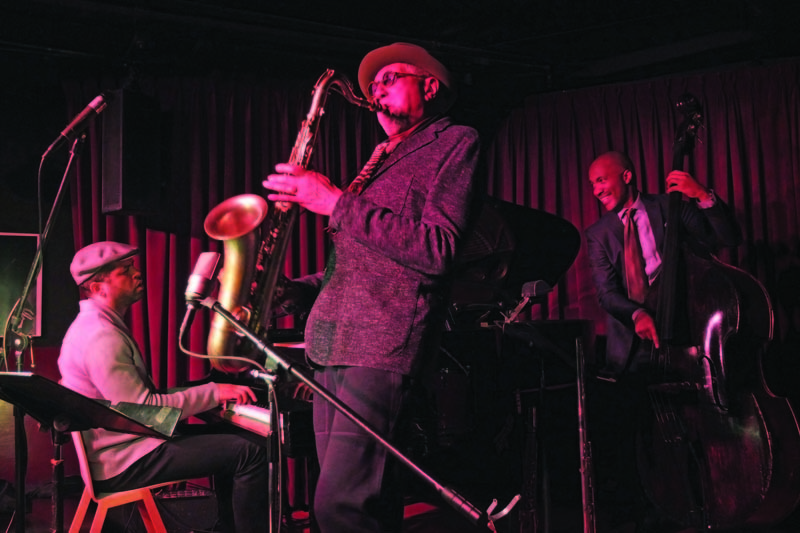 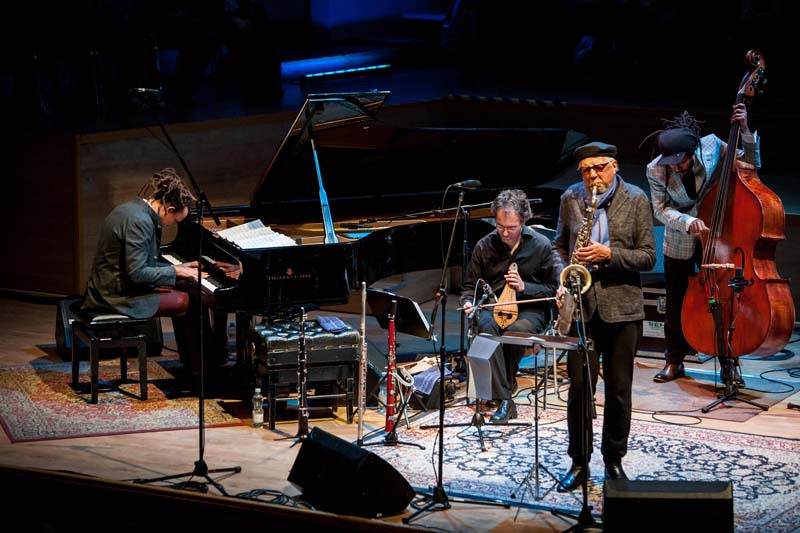 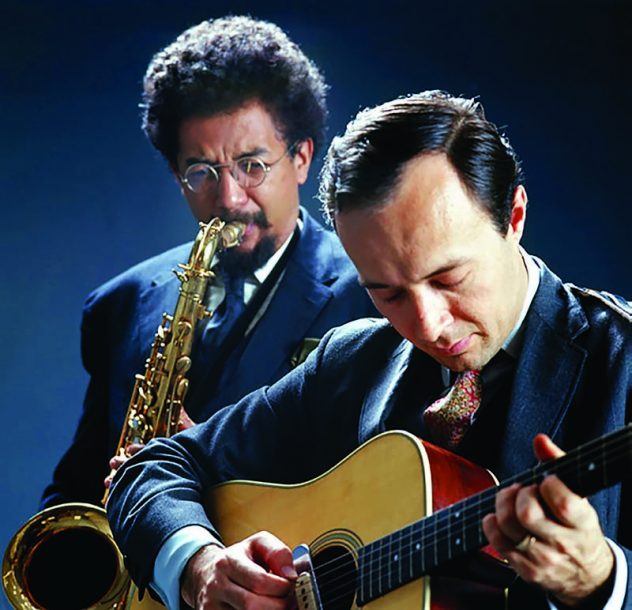 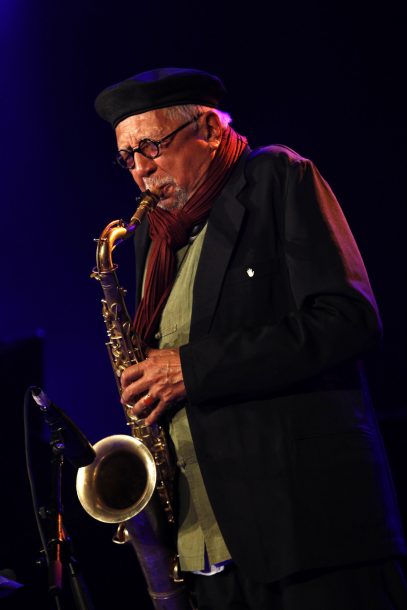 Taking the bandstand at the Village Vanguard last March, Charles Lloyd seemed unconcerned with the historic nature of the occasion-it was, after all, his first appearance at the legendary club in more than 40 years, on a day that also happened to mark his 77th birthday. (In February, the venue turned 80.) But it was obvious that Lloyd had a few things on his mind.

As his New Quartet bandmates-pianist Jason Moran, bassist Reuben Rogers and drummer Eric Harland, reunited after a year without playing together-took their spots, the bandleader was intent on opening their second set the same way they had the first, with an unfinished movement from his Wild Man Dance, the title suite of his new album, his first as a reignited Blue Note recording artist. They’d gotten somewhere new with the piece in the first set, he insisted, and he was determined to push further down that path.

There was one more detail to be taken care of before they could begin, however. Turning to the audience, Lloyd spied, from behind his round-rimmed shades, a member of the audience, seated directly in front of him, that he recognized from the first set. “Don’t jump around so much,” he ordered the apparently overeager listener, explaining that he was used to more bucolic surroundings. “I live in the woods and watch animals.”

Charles Lloyd has always been sensitive to, and inspired by, his surroundings. That fact became an integral aspect of his legend when he famously retreated from a thriving career to disappear into the landscape of Big Sur in the early 1970s. He’s continued to commune with nature since his return to the jazz world a decade later, infusing his sound with an expansive, all-embracing spiritual streak. The sights and textures of Greece have proven influential over the past decade, since Lloyd bonded in friendship and musical partnership with singer Maria Farantouri, with whom he and his wife, Dorothy Darr, spend weeks or months out of every year.

Most recently he’s looked to the natural terrain surrounding the city of Wrocław, Poland, which inspired the music of Wild Man Dance. The suite, which consists of six parts on the album but is clearly still in progress, was commissioned by Wrocław’s Jazztopad Festival to commemorate its 10th anniversary in 2013. The work’s titles refer to the Odra Valley, its namesake river and the birds that fly through it. “I’m Pisces, so I have this water affinity,” Lloyd explained the day after his return to the Vanguard, seated in his Manhattan hotel room and gazing down on the Hudson River. “I always like to be at the water when I can. I was born on the Mississippi River, and this music comes up from New Orleans originally. [Wrocław] is a mixture of a European city with nature around it and rivers and birds, so I wanted to look at the nature around that area.”

The music of Lloyd’s Wild Man Dance takes a typically wide-open but richly textured journey through the region, with pointed melodic statements suddenly emerging from airy explorations and then dissolving back into an alluring collective quest. Recorded at its premiere performance in 2013, the suite features a new collection of collaborators for the saxophonist, with pianist Gerald Clayton, bassist Joe Sanders and drummer Gerald Cleaver along with Greek lyra virtuoso Sokratis Sinopoulos and Hungary’s Miklós Lukács on the cimbalom, or hammered dulcimer.

“The festival offered me the symphony orchestra and various formations of string quartets,” Lloyd said, “but I wanted to use the antiquity of my friend Sokratis and the cimbalom that I’ve always had an affinity for. The quartet, for me, is universal, and then I integrated those guys coming from antiquity and made that my tapestry. There was a kindredness and a sonority that came together in my mind’s ear, and when we actually played it transcended what I was hearing in my mind. I’m a sound-seeker, and I think people are hungry for something deep and true and special, so it changes the molecules in the air each time we play.”

When you’re on TV, everybody knows you, or at least thinks they know you. Take Kevin Eubanks, who was on NBC’s Tonight Show five nights … END_OF_DOCUMENT_TOKEN_TO_BE_REPLACED

Jimmy Katz leads many lives. He is the preeminent currently active jazz photographer, and has shot more than 200 magazine covers and over 600 recording … END_OF_DOCUMENT_TOKEN_TO_BE_REPLACED

Take a look at Blue Note Records’ release schedule for 2022 and it’s hard to miss the significant percentage of electronic-oriented music. In March, the … END_OF_DOCUMENT_TOKEN_TO_BE_REPLACED

Those who are only familiar with bassist Martin Wind’s jazz credentials—both as a leader and as a first-call sideman for Bill Mays, Dena DeRose, Ken … END_OF_DOCUMENT_TOKEN_TO_BE_REPLACED