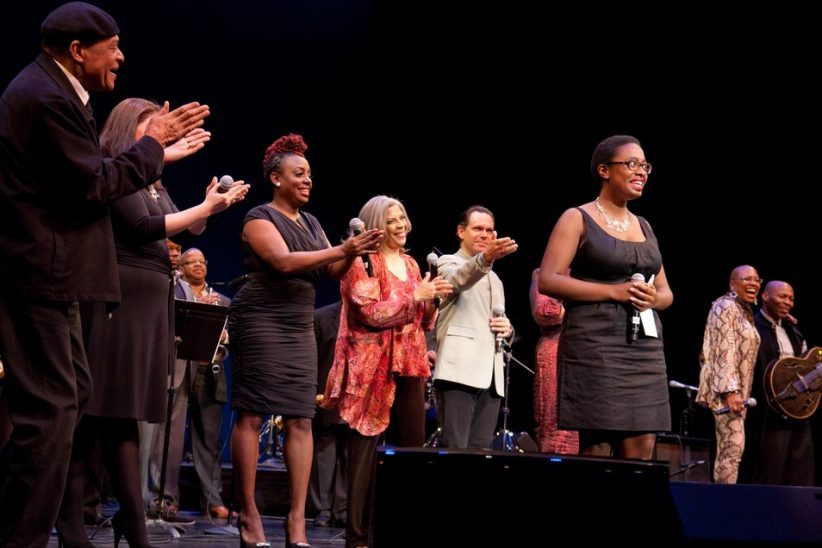 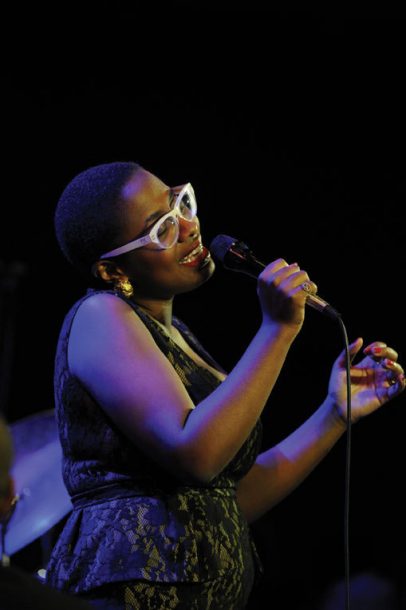 On 2010’s Cecile, her first and only album to date, the warm but powerful young vocalist Cécile McLorin Salvant offers songs like “Easy to Love” and “I Wonder Where Our Love Has Gone.” But at a recent New York gig in anticipation of her 2013 sophomore release, Woman Child, the 23-year-old had other topics on her mind, including death (“John Henry”), primality (“[You Bring Out] The Savage in Me”) and violence (“Outside of That”).

“I got to hearing more and more songs with really intense lyrics, and I wanted to add those in,” says Salvant of the period between recording her two albums. “I’ve been gleaning things from those kinds of darker subject matters. I guess it’s a part of life, so it’s always valid if I try to represent different aspects of life. Abbey Lincoln is a singer who greatly influenced me in her choice of repertoire, because it’s not always about ‘This man loves me’ or ‘He doesn’t love me’ or ‘I’m gonna cry.’ She had this conscious choice to think about repertoire in a different way.”

But Salvant has been up to a lot more than listening to music since the recording of Cecile. In October 2010, after living in France for three years, she took first place in the Thelonious Monk International Jazz Vocals Competition, an achievement that made her career move “a little bit forward and faster.” She won by being herself, a fact that isn’t lost on the Miami-born singer. “On the finals night, I just did what I wanted to do,” recalls Salvant. “I was just, like, ‘Well, you know, I got this far. Let me just sing the songs that I like and not worry about anything else.'”

The win brought more than scholarship money and the chance to work out a deal with Concord Music Group. (Salvant opted to release Woman Child on the Mack Avenue label.) Present for her big day was pianist Jacky Terrasson, who liked what he heard and kept the singer in mind for a future project. On Terrasson’s Gouache, due for an American release in February, Salvant provides vocals for Erik Satie’s “Je Te Veux” and sings the John Lennon/Yoko Ono composition “Oh My Love.”

Through the competition Salvant also met her manager, Edward Arrendell. Arrendell connected Salvant with his other artist, Wynton Marsalis, and the pair hit it off; Salvant has since worked with Marsalis in Paris, Chicago and New York, and the two will tour along with the Jazz at Lincoln Center Orchestra in December 2013. “I learned so much from just a 15-minute rehearsal with him,” says Salvant about her first time playing with Marsalis. “Stuff about phrasing, rhythm, interpretation. Getting back to listening to Louis Armstrong sing, which I hadn’t really checked out that much. Learning how to try and make the rhythm section sound good. As Monk would say, you have to make the drummer sound like he’s swinging. A lot of things that were eye-openers. Ear-openers, I guess.”

The admiration flows both ways. In an e-mail, Marsalis touched on the multifaceted nature of Salvant’s talents. “She has poise, elegance, soul, humor, sensuality, power, virtuosity, range, insight, intelligence, depth and grace,” he writes.

Set to be released in the first half of 2013, Woman Child is informed by Salvant’s experiences as a sidewoman but focuses on the dissonance between the types of songs that comprise Cecile and the heavier material she’s been working on in a live setting. The album will include familiar tunes like “I Didn’t Know What Time It Was” as well as pieces like “Nobody,” Bert Williams’ early 20th-century ode to solitude.

“It’s about this dichotomy,” says Salvant. “Our lives are basically, just, incredibly wracked with impending doom. But at the same time we laugh and we have a good time, and we don’t think about that all the time. There’re so many contradictions to life and love.”

Guitarist Will Bernard bears the bittersweet blessing of virtuosic skill and eclectic taste, making his music a perpetual delight and yet hard to categorize. Maybe … END_OF_DOCUMENT_TOKEN_TO_BE_REPLACED

At 95, Chicago-based guitarist George Freeman is among the world’s oldest active jazz musicians. Although he came of musical age in the 1940s and counts … END_OF_DOCUMENT_TOKEN_TO_BE_REPLACED

When you’re on TV, everybody knows you, or at least thinks they know you. Take Kevin Eubanks, who was on NBC’s Tonight Show five nights … END_OF_DOCUMENT_TOKEN_TO_BE_REPLACED